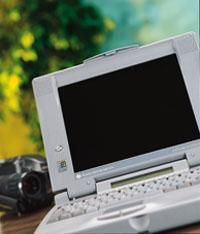 As I sipped Polish vodka in a cafe in Warsaw, I turned to my friend Herbert and said, "With video on the Web, everyone’s a webcaster. Why not us?" Around the block or around the world, with the Internet we are all webcasters with a global reach.

This sense of excitement and willingness to innovate made the international conference, Information: Restructuring for Democracy, held in Warsaw, Poland so exciting. We used consumer video cameras and off-the-shelf Internet hardware and software, Herbert Achleitner and me, Roger, two professors of Information Science, at Emporia State University’s School of Library & Information Management, along with their conference production team, technologically extended the conference making it a real-time global cyber-event. Our production team members were; Conk Buckley, James Van Roekel, Mary Carpenter and Hillary McLellan.

For three intensive days in November of 1997, university librarians, historians, information specialists, administrators, and economists from eastern and western Europe, as well as the United States, gathered in the Polish capital. They discussed the impact of information upon the democratic restructuring of the nations of Eastern Europe and the former Soviet Union. "The amount of restructuring going on in Russia and Eastern Europe is tremendous," Achleitner says. "People are beginning to realize that civil societies and economic development cannot be accomplished if information professionals don’t become stakeholders and take leadership roles."

Clearly this was a powerful message and we wanted to share it with the world. Actually achieving it was like spinning four techno-plates in the air. The first plate was to stream video interviews with conference participants onto the Internet. The second plate was to produce text summaries and impressions, along with digital photos, of conference events. The third plate was a CU-SeeMe Internet teleconference. The fourth plate was to document the conference on video for the production of a CD-ROM. This article is concerned with the streaming video aspects of the project. The other spinning Techno-plates? Well, that’s another story.

A project of this complexity
just doesn’t happen on the spur of the moment. Like every video
project, this one required some pre-production. There were the
usual chores of working out the project objectives, logistics,
budget and timeline. Since this was a production with a lot of
new technology, equipment and software, systems had to be tested.
The team started training six months in advance by shooting a
complete streaming video production called "Report From Warsaw".
This meant in addition to getting the shots, the video had to
be digitized, compressed, and coded in HTML onto the conference
Web site. Doing this allowed the crew to polish their production
skills, audio and video techniques, digitizing, and the rest.
This project was edited using Adobe Premiere. When complete it
ran around eight minutes and required about 1GB of storage space.
Needless to say it was going to need compression if it were to
go up on the Web. After being compressed with Vivo Active software,
it was lean and ready for posting to the Web.

With video, even streaming video, it all comes down to wires. Find out what is needed in advance. The world runs on many different electrical systems. Plugs, outlets, and voltages are different; that goes for phone jacks too. Like most modern camcorders, our Sony TR-101 Hi8 camcorders are dual voltage and worked fine with Polish electricity. All we needed was an outlet adapter. We were ready.

Even With Jet Lag, The Show Must Go On

Warsaw is seven time zones east of our home state, Kansas. The most immediate impact of that was jet lag. The moment you announce that you are going abroad, everyone pops out of the woodwork with advise on how to cope with jet lag. From a project perspective, the best thing to do was to arrive early in order for the crew to reset their body clocks. The next thing to do was to organize the equipment, check out the premises and continue training.

With the conference underway, the production team started producing streaming video interviews with conference participants. We had these up and running on the Internet within hours of recording them. Here’s how it went.

The production of streaming video combined traditional video processes with digital technique. It all started by picking a location that was visually effective and supportive of good audio, and then putting somebody who had something interesting to say in the location.

Typically we conducted 10 to 15 minute interviews, with the interviewers on-camera along with the person being interviewed. Since we were working in real time, there was no time to edit. To compensate, we would zoom from a wide angle to closeup. Our production assistant, Mary Carpenter, shot the video while team member James Van Roekle rode the levels to mix the sound. Video on the Net needs to have excellent audio. Lapel mikes on all participants or a shotgun mike on a boom handled by an operator were "musts" for good sound. The internal camcorder mike just wouldn’t do.

We found that a camcorder mounted on a tripod was necessary. In addition to looking good, a steady shot means a smaller digital file. A steady shot doesn’t waste bytes accounting for a jittery frame.

Streaming Our Video
The recorded interview tapes were taken to Conk Buckley’s hotel room where he set up a post-production studio. The Hi8 tapes were digitized into an IBM Thinkpad that was equipped with a Nogatech digitizer. This digitizer is made for laptops. It slides into the PC slot of any Wintel laptop. Next we hooked up the video and audio outputs of the camcorder to the appropriate inputs on the Nogatech card. Then we ran the software that came with the digitizer. By pressing playback on the camcorder, we began digitizing. When it was completed, we saved the file.

Our files needed to be compressed. Today’s Internet can’t handle uncompressed video. It chokes the Net. We slimmed our video down with Vivo compression software. We used a very high compression setting of 200:1. With that high of a compression ratio our pictures didn’t get mistaken for HDTV. However, smaller files mean faster downloading. They travel the Internet much faster that way. After the conference was over and the team had returned to Kansas, higher quality files, using less compression, were posted to replace the original high compression files.

Using FTP (File Transfer Protocol) we post the files to both the home Web site in Emporia, KS., as well as the mirror site at the University of Warsaw. Now we posted the video interviews that were available for viewing on the Web. The entire process was accomplished within three hours.

What did we learn? Well for one thing, off-the-shelf technology works for a global project. The Warsaw conference didn’t use custom, or for that matter, high-end technology. The consumer level camcorders we used were five years old, hardly state of the art. The computer hardware was practically generic. The current state of digital technology is more than adequate to meet the challenges of streaming video internationally and almost in real time. As I said before, on the Net everyone’s a webcaster.

We also saw the future. Streaming
video on today’s Web is by no means perfect. Webcaster’s dreams
are out ahead of Internet actuality. However, this is a temporary
situation that’s changing fast. We’ve seen this sort of change
before. In 1993 QuickTime was a bunch of pixels dancing on a Post-It
note. By 1995, QuickTime was a broadcast medium. What a difference
24 months makes. Given the blinding speed of all aspects of Web
development, compression, bandwidth, and all the rest, it is only
a matter of time before the bottlenecks to streaming video are
taken out of the Net. In the meantime efforts are not wasted because
streaming pioneers are riding the learning curve, perfecting their
skills, getting ready for webcasting on the Net.

Roger B. Wyatt is a techno-scribe and content strategist for new media.