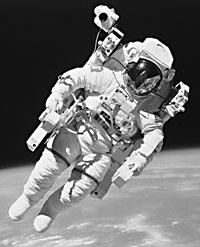 When it’s time for a video’s plot to change location, many editors pull out their trusty switcher. A switcher performs the fades, wipes and dissolves that are used to suggest to your viewers that the location of the story has changed. Effects done in a switcher or a Digital Video Effects (DVE) device are known as "optical" effects. However, once you have a switcher, you can become dependant upon optical effects. Your videos may begin to get a cookie cutter look, with every transition relying on your equipment instead of on your imagination.

There is an old saying among editors, "If you can’t resolve it, dissolve it." It means that if the director did not get proper coverage, the editor may find himself painted into a corner and have to resort to an optical effect to get out. Nevertheless, a non-optical indication to changes of time or place is a superior solution–or at least more clever.

Throughout this article I will be talking about the editor’s approach to creating transitions. But you need to keep in mind that you can’t do anything in the editing stage unless you have the proper material to work with. Plan your transitions before you begin shooting, or at least keep this information in mind while you’re shooting so that the right kind of footage is ready when it’s time to edit.

A basic cuts-only transition technique involves creating matches in two successive shots (referred to as "scenes"). Editors commonly match on-screen position. If you put the center of interest in the same place on the screen in two successive scenes, everything else in the picture can change and viewers will perceive the transition as smooth. This is how you get the character from the car to the kitchen without showing him walking up the steps, through the door and into the living room.

The easiest way to give yourself plenty of opportunities to match on-screen position is to shoot all your shots with the main subject or point of interest in the middle of the frame. This will ease the whole editing process, even those cuts that aren’t supposed to be transitions. If, for aesthetic or compositional reasons, you want to put the subject off-center, then be sure to compose the next shot in the transition with the subject in the same screen position.

The size of the continuing element in the frame is less important. While it might be a smoother edit if the sizes match, most members of the audience will not be shocked if there is a moderate change. It would be all right, for example, to have a long shot of your subject approaching a building, and then cut to a medium shot of him walking into an office on the 38th floor. Just make sure that he is in the same area of the frame and moving in the same direction.

Screen position is the most basic kind of match, but you can also match on shape or color. Anything that can be perceived as the same in two different scenes, and which is the center of the viewer’s attention, will ease the transition between them. For example, you may have your hero rushing to get to his laboratory to try to stop an experiment before it begins. He pulls up to a flashing red stop light. We see the flashing light illuminate his face as he looks up at it. The next shot is a closeup of another flashing red light. The camera pulls back to reveal that this light is in the laboratory, indicating that the experiment has already started. This example combines a match of shape, color and flashing to make a connection between the two places.

You can use movement in this way, too. Editors refer to this as "cutting on action." Let’s say you have several shots of a boxer working with a punching bag. You take shots of his arm rhythmically moving back and forth. You then cut to a similar shot of the boxer punching in the same direction, but this time he is in the ring with his opponent. Matching the movement between two scenes smoothes the transition. Matching movement as well as screen position, shape and color makes it even better.

A special type of action match is the body wipe. This involves using a large object in the scene to function as a wipe. A classic example is the scene that includes a person moving across the frame and completely blocking the view momentarily. As the person moves by a different scene is revealed.

In matching shots, some elements of the scene are the same in both shots. A cut-away is a shot that does not contain any element of the preceding shot. A simple example would be a closeup of something that someone is doing, say knitting a sweater. Follow this with a closeup of the person’s face, looking down at the knitting. This second shot is a cut-away because it shows only the face, not the knitting itself or anything that was in the preceding shot.

You can use this as a transitional technique if it is a cut-away that could be a part of either of the two scenes. For example, you might want to show a tourist visiting various places. You show a street scene in some big city. Next you see the tourist bringing her camera to her face. You cut to a closeup as she clicks the shutter and the shot pans away to reveal that she is now in a completely different town.

That kind of transition is a writing or editorial trick, but it is also an intellectual match. The viewer accepts it because it fits the sense of what is happening. Purely intellectual matches work; but they are not as common as the other kinds.

Use matching cuts to make transitions when you want the viewer to connect two scenes that happen one right after the other. You can use cut-aways to create a transition between scenes you want to keep separate. You can insert a scene that does not contain elements of the preceding scene (but might conceivably if you shot it from a different angle). Then follow it with a completely different shot.

A simple example of this might begin with a closeup of something that a person is doing. Follow this with a closeup of the person looking down (at his or her work), then looking up and off into the distance. You can then cut to a completely different scene, perhaps something that the person could be looking at or thinking about. You’ve now moved the viewer into the next sequence.

Another camera technique that can be used as a transition is the swish pan, commonly used in old movie newsreels. This is simply a pan that moves so fast that the picture becomes a blur of horizontal lines. It’s cut between two completely different sequences to say that we are now "swishing" from this subject to that one. You can finish the short end of a tape by simply putting the camera on a tripod and panning it rapidly for a few seconds. This creates a swish pan that you can cut between two sequences as a transition that both connects and separates them at the same time.

You can also use the sound track to create a transition. An effective technique is to use what is called a "sound bridge." You do this by starting the sound for the new scene over the last second or so of the video from the current scene. The audience hears a sound that doesn’t seem to belong to the present picture, which rouses its curiosity. This curiosity is satisfied when the new picture appears, resolving the unexpected sound. Thus the sound bridges the distance between the two scenes.

You don’t need to spend a lot of money to create effective transitions in your videos. Using the techniques we’ve presented here, you can move your story across time and space smoothly even if you don’t have access to a switcher. And if you do have access? Well, paying attention to these tips will make your optical effects even better.