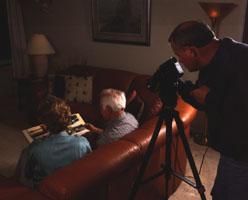 They stare at me glumly from under the brims of their straw skimmers, as if to say, "We trusted Cousin Willie’s Kodak to keep our memory green, but you don’t even know our names;" and as I page through Grandma’s withered photo book, I must admit my ancestors are right.

Which is frustrating because I blew my only chance to find out who they were. Some years ago I sat with my mother as she turned through this ancient album while delivering funny and libelous comments (like the one about "Auntie Sparkle," who won her nickname because she killed a jug a day of hundred-proof "nerve tonic" from a teetotal teaspoon instead of a shot glass).

I’d struggled to write notes as Mom put names to those monochrome faces, but I can’t find them anymore, and now she too stands silently with Auntie Sparkle and Cousin Willie in that great snapshot album up above.

If I had known, I would’ve grabbed a camcorder and preserved my mother’s priceless guided tour. To help you avoid my mistake, here’s a lightning-fast survey of video family histories, plus a closer look at just one of the many possible projects of this type.

For most of us, our strongest links to the past are people linked through family genealogy. And that’s where the camcorder and the home computer make a perfect couple. A genealogy program/database is the first truly practical way to cope with family generations that branch like maple trees. Many newer computers will output NTSC video directly through a simple S- or composite video jack. If your model lacks this feature, you can buy a VGA/NTSC signal converter for as little as $100.

Though family history is still often synonymous with people, past places can be equally resounding. The old home or farm, the family’s shop, public school 92, the cabin on Lake Wannabee–these live in our memories and we want to know if they are still there and if they have changed.

As a visual medium, video is ideal for capturing places in our past, and doing so is easy if you still live nearby. For example, go knock on the door of your childhood home and explain that you’d like to capture it on video. To improve your chances of success at this:

Once you’ve obtained permission to shoot, use those old photos to set your camera shots for near-identical angles. Later, you can tape the photos and edit them together with the live shots, for comparison.

What if you don’t live locally? Consider an expedition. During this coming year my wife and I will make a pilgrimage to Connorsville, IN, Webster Groves, MO, Pittsburgh, PA, and Potsdam, NY among other places, to revisit and record the geography of our two lives.

In addition to people and places, let’s look at things as well, artifacts that connect us to our pasts. They may be truly old, like my wife’s yellow newspaper that announces the death of George Washington or they may be as recent as that collection of pop albums from the seventies that you’ve never had the heart to purge from your garage.

With things or places, don’t overlook the audio possibilities as well. You can build a powerful sound track from those Oldies and the sounds associated with locations can be richly remindful. Historic noises may be as sweet as the lark in the morning above the old farmhouse, or as jangling as the low-flying jet above the old tract house under the airport flight path. Both sounds summon memories, and that’s what you’re after.

But even if you can’t set forth in search of your roots, you can hunt them down at home, usually in those photo albums or shoe boxes.

Begin with a good location for taping:

Except during these moments, place the camcorder on its tripod behind the couch and between the two participants, framing a bird’s eye (very high) close-up of the pages of the album. If necessary, move the couch and table away from walls or other obstructions to open space for your camera. On screen, the move will be undetectable.

Now here’s the critical concept: though you may use some of the shots from this angle, the picture is mainly to identify pictures and the people in them as the tour guide talks about them. Your real interest is the sound (that’s why the camcorder’s built-in mike is not up to the task here: it’s behind the subject).

Coach your interviewer beforehand to ask for the essential facts, especially where and when the picture was taken, who was each person in it, and what is their family relationship. Encourage open-ended questions to bring out more information. Interrupt the process if you need to, to request amplification or a repeat to replace a verbal stumble. Remember that you’ll edit the resulting audio.

With the live interview finished you’re ready to provide the photo close-ups that’ll really sell your program. But first you have to edit:

As you can see there’re many different approaches to family history videos, and whichever one you choose, you’ll benefit from following two suggestions. First, remember to include historic places and things as well as people. Second, video is most effective when supported by audio, so focus on historic sounds as well as sights–sounds that range from Grandma’s narration to the hiss of the steam press in the family dry cleaning business or the creak of the wind-driven water pump filling the barnyard trough.