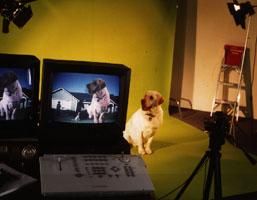 Most of us know that chromakey is the electronic wizardry that combines two video images into a single picture so that, say, a child can appear to be dwarfed by a colossal hound. What some people don’t realize is that chromakey has endless practical uses beyond special effects. Also, the technology is inexpensive, simple to use, and readily available to hobbyist videographers. So let’s look at how chromakey works, how to set up a system, and what you can do with this digital magic.

In a nutshell, the chromakey process designates a single, very narrowly defined color in one video image and electronically replaces that color with a second image, leaving the rest of the picture untouched. The foreground and background pictures may be live camcorder feed, videotape, computer output, or any combination to create a chromakey effect:

In the classic TV weather example shown in figure 1, the wall behind the weather person is painted a special chromakey blue and lit so that the entire area is equally bright and shadowless. The studio’s switching system is fine-tuned to recognize only that particular blue as the color to be replaced. When the image of the forecaster is electronically combined with the computer-generated weather map, the map replaces the chromakey blue but not the performer. Some systems will recognize only one shade of blue, but if you can choose your chromakey color, as you can with the Videonics MX1 mixer and other products, you can use any uniform color, even a softly lit building wall or a plain blue sky.

You can get great chromakey effects if you can output a video signal from your computer. Use this technique to insert animation or still graphics into live action, a la Roger Rabbit, or create superimposed titles in slide show programs such as Corel Presentations or Microsoft PowerPoint. Because the software can generate an absolutely uniform background color, the resulting superimpositions are exceptionally clean.

Now where do you get the hardware required to combine the two images? Some inexpensive A/B-roll video mixers have chromakey capability, and better quality prosumer products offer considerable sophistication.

The MX-Pro from Videonics succeeds the MX1, Panasonic offers the WJ-AVE55 and stand-alone switchers are available from SIMA and Edirol. For nonlinear editors, programs like Adobe Premiere offer a wide range of chromakey and other superimposition methods. A relatively small investment can buy you both a chromakey shooting setup and the digital goodies to process the results. The next step is to put ’em together.

The most important factor in chromakey backgrounds is uniformity of color, surface, and lighting. The goal is to produce a backdrop with (very nearly) the same hue, value, and intensity over every single square inch. You can solve both surface and color problems in a single bound by buying a roll of seamless chromakey blue studio backing paper from a photo supply house. To use the paper, hang it from a simple pipe rack, unroll it, pull it forward until the wall-to-floor transition is a smooth curve, and place your actors on it.

Alternatively, you can clear a stretch of wall in your basement or garage and paint it chromakey blue. Take the trouble to tape, mud, spackle and sand as needed to produce a truly smooth surface. The price of "official" chromakey paint would make your jaw hit the floor, so fake it instead. Simply take the color swatch printed here to your friendly neighborhood paint store (preferably one with computer matching) and brew up a gallon of water-based paint for under 20 bucks.

And here’s a trick for teachers: a classic light-green chalkboard makes an excellent backing if you wash it carefully; and overhead fluorescents often provide light uniform enough for good keying. Of course your digital switcher must be capable of designating the chalkboard green as the keying color.

For full-length shots the wall or paper roll should be at least 9×12 feet. There are two reasons for this. First, you need a minimum of six inches on all borders to protect against shooting off the backing. Second, you want to place the foreground subject as far from that backing as possible, so as not to spoil the effect by throwing the subject’s shadow on the wall.

As figure 2 reveals, the greater the distance from subject to backing, the larger that backing must be. If this is starting to sound like too much construction, try chromakey-lite instead: tack up a 4×6-foot sheet of half-inch wallboard, paint that puppy blue, and start shooting. However you’ve created it, you now have a flat, smooth, evenly colored surface. The next step is to light it.

Professional studio lighting setups (figure 3) have two advantages: 1) They keep the subject’s shadow off the wall. 2) They permit directional light on the subject for better modeling, while keeping background illumination flat.

Nowadays, however, even the big guys (like The Weather Channel, for instance) go in for simpler schemes that bathe both subject and background in the same soft light, as sketched in figure 4. The trick here is to use side lighting, because even very soft overhead illumination is not absolutely shadowless and lateral lighting throws the shadows off the background. If you can do it, create the best cheap soft light of all by mounting white wallboard panels on the side walls and bouncing the light off them, as shown in figure 5. If your camcorder has adjustable white balance, you might consider mounting a bank of fluorescent lights overhead (figure 6).

For bargain basement lighting, equip your setup with a pair of two-headed halogen work lights on telescopic floor stands. Their color temperature is perfect for video. For greater versatility, invest in 300-watt halogen torchere floor lamps (under $20 each at X-Mart). They brighten a room very evenly, consume relatively little power, and look like residential lighting if you accidentally include them in a shot.

Give It Your Best Shot

It’s time for chromakey’s dirty little secret: it almost never works perfectly–as you can tell from the electronic fireflies that sometimes rest on the TV sportscaster’s toupee. Fact is, the edge around the foreground subject is rarely pixel-perfect, but there are things you can do to minimize glitches and enhance the illusion

Even if you’re taping the foreground subject for later editing, you’ll find it helpful to feed the live image through the switcher, key it onto the background image in real time, and display the composite picture on a monitor placed where the on-camera subject can see it. Although this is not always practical, it helps the talent to interact convincingly with the background.

While the talent watches on one monitor, the engineer (probably you in a different hat) is watching a second screen at the switcher, while fine-tuning the effect. Most chromakey switchers allow you to adjust the background color selected and to widen or narrow the range of shades that will key. In theory this process is quite sophisticated, but in practice you work it just like video picture tracking: fiddle with it until it looks its best, meaning the fewest fireflies and other artifacts spoiling the outline of the foreground subject. With patience and practice you can get almost invisible joins.

For optimal results you need to dress your talent for success. Avoid clothing whose color is even remotely close to that of the backing so that the second image won’t key onto it. Keep hairstyles frizzle-free to simplify the border between head and backing and to avoid picking up destructive highlights from the lighting.

To minimize any remaining imperfections, steal a technique from good magicians: conceal the illusion by distracting the viewer’s eye. The trick here is to keep the foreground simple and still and the background busy and moving. Every time your subject changes position the software has to reconfigure the keying, often creating new and obvious artifacts in the process. With the background footage, go the opposite route: a visually complex image tends to conceal the join with the foreground and background movement draws the viewer’s attention away from it.

Finally, utilize the frankly fake. That is, key together pictures that make absolutely no pretense of being parts of the same view. In these situations, clean keying still looks more professional but it’s not needed to sell an illusion.

Instead of a weather map, imagine Grandma backed by full-screen family snapshots as she introduces a video photo album. That’s just one of the many practical uses for chromakeying. Another is picture-in-picture. When you use a switcher effect to place a small second image in a corner of the main one it appears in a window. By using chromakey instead you can superimpose just the subject of the small image, with no frame around it.

Chromakey is great for narration when it’s not practical to do "standup" remarks on location. For instance, instead of trying to yell your commentary from the deafening depths of a steel mill, don a hard hat and work jacket and deliver it in the studio with the mill keyed behind you. Even when the location’s quiet, you may want to insert someone into it later. For example, you might prefer to add some doggy sound effects for your over-sized mutt after you’ve edited the footage.

We could multiply examples, but we’ve already proved the case that chromakey is a simple, affordable process with endless practical applications. Consider adding it to your video tool kit.