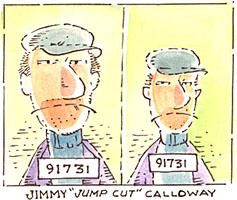 BREAKING NEWS BULLETIN: February 1998
The Federal Bureau of Editing Aesthetics has recently released a list of seven editing saboteurs still at large. These saboteurs have been linked to countless editing crimes perpetrated in bedroom editing bays and professional facilities alike. They are believed to be armed and dangerous, preying on inexperienced and unwary videographers. Please review the following perpetrator files to insure you don’t fall victim to their schemes.

Last seen: Making the host of a corporate training video appear to hop from place to place in the frame

M/O: Jimmy "Jump Cut" Calloway lulls his victim into thinking that two shots very similar in angle or zoom setting will edit together smoothly. Instead of a seamless edit, however, the result is always a transition that jars the viewer. Jimmy understands that modern television viewers are conditioned to accept cuts that make large, instantaneous changes in viewing angle or distance. It’s the small changes–where the subject seems to jump to a slightly different position–that the eye notices.

If spotted: If Jimmy "Jump Cut" Calloway shows up at your edit session, there are some simple things you can do to render him harmless. The first is to learn to spot his handiwork before it’s too late. If you find yourself cutting two similar shots together, stop! Look for a different shot to cut to, one that differs considerably from the first in zoom setting (subject size), angle or subject position. If you don’t have such a shot at your disposal, use a cutaway to separate the two similar shots. The cutaway will act as a "buffer" between the two shots, rendering Jimmy and his jarring jump cut harmless.

Last seen: Turning a serious documentary into a laughing affair

M/O: Louise "Lip Sync" Sardoni finds clever ways to keep your subjects’ lips from moving in sync with their voices. She may bump the audio and video out of sync dramatically, giving your video the look of a poorly dubbed foreign film. Equally distracting is when she offsets the audio and video just slightly, making viewers wonder if the problem is really inside their own heads. Either way she commits the crime, Louise robs your video of its credibility.

If spotted: If you suspect Louise "Lip Sync" Sardoni of tampering with your video, you may need to re-evaluate your editing process. Any time you take synchronized audio and video elements (like on-screen dialogue) record them onto separate devices and try to re-combine them, you’re giving Louise a foothold. Unless you’ve got a rock-solid timecode-based system, always keep synced elements together on the same piece of tape. Don’t try to offload your dialogue to audiocassette to add audio effects at a friend’s recording studio, for example–you’ll never get things back in sync. If you’re doing computer-based editing (especially with separate audio and video capture cards), be sure all your hardware is working together without conflict. Take these simple precautions, and you’ll send Louise down the road in search of easier prey.

M/O: Gary "The Glitch" Gleason finds a way to create some technical snafu at the edit point, making the playback deck stumble visibly at every transition. Gary has two main tools in his arsenal: sloppy editing techniques and shoddy equipment. The unwary videographer gives Gary a window of opportunity by not carefully cueing up the record deck after each edit. Clean edits can be a challenge for even the best equipment–malfunctioning or antiquated gear makes Gary’s job an easy one.

If spotted: When Gary causes an edit to glitch, rewind your record tape and try to discern exactly how he sabotaged your production. Play frame-by-frame through the edit, if you can. If you see a burst of video snow between scenes, you didn’t have the record deck properly cued before performing the edit. Do rainbow-colored bars roll through the video for a few seconds after the edit? If so, you may be trying to edit on an old VHS VCR without a flying erase head (something every editing VCR must have). If your VHS VCR has a flying erase head but still hiccups at the edit, try using A/V dub instead of assemble mode. This requires laying down video (usually black) on your record tape before editing, but can insure more stable edits. If Gary’s still wreaking havoc with your edits regardless of VCR type, your equipment may be due for service.

Last seen: Making a stolen car appear to race away from the crime scene, then back towards it, then away again…

M/O: Lenny "The Line" Liccardello makes on-screen motion double back on itself by editing together shots taken from both sides of the action. He lulls videographers into forgetting the imaginary line that subjects move on through a scene. On-screen subjects appear to move in the same direction only if shot from the same side of the line. Lenny loves to cross that line.

If spotted: If Lenny has your subjects running back and forth through your video, you need to exercise a little more care in the editing process. Use only those shots where the on-screen direction is the same. If you want (or need) to "cross the line" and reverse the on-screen motion, end Lenny’s reign of confusion with a neutral or "Z-axis" shot. This type of shot comes from a vantage point on the imaginary line itself, usually with the subject moving straight toward or directly away from the camera. Edit this in briefly between the two offending shots, and your audience won’t question the change in on-screen direction.

Last seen: Making objects magically appear and disappear on the set of a big-budget dramatic production

M/O: Christine "Continuity Crash" Colvin loves to use not-so-careful editing to make sure everybody spots mistakes made during the shoot. It’s easy to accidently bump a plant between takes, or let your derby-clad hero forget to put his hat back on. If you spot these mistakes during the edit, you can minimize their impact on your production. Let Christine blind your eyes, however, and the whole world will know of your lapses in continuity.

If spotted: You can keep Christine at bay by recognizing that continuity errors will pop up at almost every shoot. Plan on them, and watch for them during the editing process. When you see a plant transport itself out of the frame or a drinking glass go from empty to full, try to downplay the continuity glitch in editing. Is there another shot you can use that doesn’t flagrantly violate the laws of physics? Can you put a shot between the two to make the sudden appearance or disappearance of an object less noticeable? Often, there’s little you can do to minimize the effects of a continuity faux pax when you spot them in the edit. Still, that’s a whole lot better than letting Christine keep you from seeing them until it’s too late.

M/O: Fred "Flash Frame" Fargo failed his undergraduate course in subconscious advertising, but he still loves the visual effect of a single frame of wayward video. More subtle than some of his saboteur cohorts, Fred’s handiwork can still have your viewers saying, "What was that?" By wearing down the diligence of the editing videographer, he can pepper his tiny distractions throughout a production.

If spotted: With practice, you’ll be able to spot one of Fred’s flash frames from across the room. Keeping them out of your videos in the first place is as easy as knowing your equipment well and compensating for its idiosyncrasies. The place most flash frames pop up is when you’ve gone back to fix or otherwise adjust an edit. Instead of completely overwriting the previous attempt, the new video starts a frame late. To foil Fred’s best efforts, simply move your edit-in point forward a frame or two before you redo the edit.

M/O: Sammy "Special Effects" Everson believes that every video will be a little better with the use of copious special effects transitions. He feels most editors overuse the simple cut, preferring to live by the motto, "Let every edit be an event."

If spotted: When you hear a small voice encouraging you to use every transition in your new SEG, Sammy "Special Effects" Everson is undoubtedly sitting in on your session. Before temptation can take hold, recognize a few simple facts about editing. First, the cut is the most frequently used transition, relied on by Hollywood editors with infinite special effects transitions at their fingertips. Second, any transition that’s not helping your video move forward is actually holding it back. Third, today’s nifty twist-and-spin transition is tomorrow’s cliche effect. Use special effects when appropriate, but don’t let Sammy tell you when that is.

IMPORTANT:If you spot any of the criminals listed, do not try to apprehend them. Instead, call the Editing Aesthetics Hotline immediately at 555-HOT-EDIT.