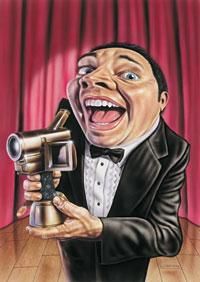 Back in July of 2002, we announced our 16th annual Videomaker/Panasonic Short Video Contest. Soon after, the entries poured into our mailbox, and the Editors pored over the entries. In the end, we selected the winners, and now it’s time to show the world. They impressed us, they made us think, they made us laugh and they made us cheer. Now, without further ado, we present the winners. Congratulations to one and all!

<!—Note: The wmv clips below can be viewed on most Windows machines with current versions of Windows Media Player. They can also be viewed on other platforms (including Mac OS X and Linux) with VLC, a free player downloadable here: http://www.videolan.org/vlc. —>

Delbert and Rufus are two brothers (as played by the Simpson brothers) – one a school janitor and one an eccentric. This is a very funny video with very clean MPEG encoding. Post-production was done in a Mac OS X environment using Digidesign Pro Tools LE, Boris Red and Apple DVD Studio Pro.

18-year old Ryan Williams presents Die in Winter, a macabre experimental piece presented in black and white. Stunning shots in the snow gathered in Breckenridge, Colorado give the video a magnificent and frigid quality. This work is not for the faint of heart, but it is a well-produced and powerful video.

A combination of great composition, judicious use of color filters and a creative use of fish-eye lenses makes Perspective a high-impact documentary about a group of New Jersey skateboarders and their struggle to be understood by the law-enforcement community.

The name Colin Minihan might be familiar to anyone who follows our annual contest particularly closely: Mr. Minihan won the Young Videomaker Award in the 2001. 5 Minutes is a very well-paced and funny video about a young woman who happened to wait until the very last minute to return a rented videocassette.

A surreal yet ethereal video with no dialog, Dementia follows a man from when he wakes up until his spectacular collapse on a busy walkway. Arshad used Adobe After Effects 5.5 Production Bundle to create the composited effects, and encoded the completed project in DivX for submission.

When a guy installing a smoke alarm accidentally drills into the radioactive heart of the device, he acquires the super power of being able to drill perfect holes into anything, anywhere. Follow along with this wacky, fast-paced and unusual video, backed by performance shots of the band (including a brief parody of Queen’s "Bohemian Rhapsody").

A clever and humorous parody of Se7en, Acron7m comments on the overabundance of acronyms, initialisms and jargon that dominate and define consumer electronics. Two police detectives, a pizza delivery guy and a squirt gun figure prominently in the outcome.

Another dramatic and poignant video entry in this year’s contest, Jamais Vu is a story of a newly engaged couple who find themselves involved in a fatal traffic accident. Later, while at a bar, the bereaved fianc (played by Brian Hahn, this year’s Grand Prize winner) comes across a shadowy figure who appears to be the killer of his would-be wife. The story is powerful, and the black and white, letterboxed presentation really enhances the production.

Title: The Flood of Our Troubles

Fifteen-year old Brian Hahn was ecstatic to hear that he won the Grand Prize for The Flood of Our Troubles, a music video with enchanting, dreamlike imagery. The video included concert footage of Underwood (the band playing the song), which was complete with colorful lighting. Great editing, with great transitions, fast pacing and very creative shots make this video a tough act to follow. We salute Mr. Hahn on a job well done for an outstanding video.

Thanks to all of the intrepid video producers who were brave enough to let us scrutinize their work, and congratulations to all of our winners. We look forward to seeing next year’s entries. Look for our Call for Entries in the July and August issues of Videomaker.


[Sidebar: Copy This]
Using copyrighted music is always a hot topic and legal issues are a part of the entry requirements for the contest. This year, we were struck by the ease with which a number of entries received permission to use copyrighted music – just by asking. Perhaps the best example was D. Hunter White and April M. Barnett’s use of "Pink Triangle" by the multi-platinum, award-winning band Weezer. By asking and then meeting the requirements of the record company (UME), Ms. Barnett was given a license to use the song in her hysterical no budget production "Silence is Bronze." So quit worrying about whether the RIAA is going to bust down your front door and haul you away for your copyright transgressions and write a polite letter asking for a copyright license. We think you’ll be surprised how easy it is.

We explicitly included a Young Videographer’s category to encourage young shooters in their new hobby (and possible future career). The young guns apparently don’t need any encouragement, however, as the entire contest and winner’s list was dominated by entries from folks under 20 years of age.