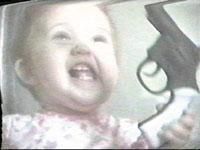 The Videomaker/Panasonic Contest brought in 163 entries this year, featuring a wide range of compelling content. From narrative storytelling and compelling documentaries, to music videos and simple day-in-the-life vignettes, choosing the winners was no easy task for our judges. One thing was certain, though: you’ve all got talent!


A few entries stood out among the rest, earning themselves top billing and top prizes in this year’s contest. Thank you to all who entered and congratulations to this year’s winning team.

Baby Killer
James Shepard’s Baby Killer, a depiction of the effects of television violence on our youth, managed to nudge out the competition and take home this year’s Grand Prize. The short video opens with an infant completely engrossed in a TV program of two men fighting, both with guns drawn and bullets blazing. When Mom and Dad attempt to remove the child from watching TV, the infant uses the knowledge he has gained through countless hours of violent television viewing and a full-blown battle ensues. What follows is clever camera work and interesting special effects including big-time wrestling, punching and a gun-toting baby edited together in an exciting sequence that proves Shepard truly has a cinematic flair.


"TV is the great American babysitter," Shepard says. "Children are fascinated with TV and pick up on what they see … I feel that it’s not guns that kill people, TV kills people."


Like many video enthusiasts, Shepard was working within a limited budget, and had to improvise to achieve certain effects. During production, he used a Panasonic VHS-C camcorder, but in trying to give his video a different look, he got inventive.


"I really wanted to give it a film-type look," he said. "So, I fashioned the lens with a beige stocking to soften up the light and give the image a tinted quality."


With only two short videos on his resume, Shepard plans to dig into the collection of screenplays he’s been writing for the last seven years, and with enough perseverance, hopes to finish a full-length feature movie.


With one award-winning video already under his belt and a brand new DV camcorder now in this possession, the future looks very bright for this producer. Good luck, James.

David and Goliath
When Rod Hillis bought his first camcorder eight years ago to record his newborn son, he never dreamed he’d end up shooting a prize-winning video. But that’s just what he’s done with his entry David and Goliath, an animated version of the popular Bible story.


"I recently bought a computer, and I thought it would be a good way to try to do a clay animation video. I wanted to try some kind of stop-frame animation," he said.


Hillis used a Sony CCD-F40 8mm camcorder, Sony SLV-757 VHS VCR and a Gateway 2000, Pentium 133 computer with 32MB of RAM on the production. For capturing the video, he used a Fast A/V Master capture card and for editing, Adobe Premiere 4.2 editing software.


David and Goliath required approximately 150 hours of taping, according to Hillis. "My biggest obstacle was probably the clay I used," he said. "It would start melting or crack."


What does the future hold for Hillis? He’s not sure, but said he is interested in creating another production with similar qualities as the movie Toy Story. Keep us posted, Rod, and good luck!


The video, which follows a day in the life of a man whose profession requires him to capture monsters, is packed full of dry humor that left our judges rolling in the aisles.


"I got a strange inspiration, and I went with it," said Pagnotta, who has been shooting video as a hobby for about 10 years.


Pagnotta used a Panasonic AG-EZ1 DV camcorder for shooting, and a Pentium 166 MMX with 64MB of RAM and a 2.5 gigabyte EIDE hard drive during the editing process. He also used Truevision’s Bravado 1000 video capture card with Adobe Premiere, a Soundblaster 32 AWE sound card, and a Sony SLV-770HF Hi-Fi VHS VCR.


The biggest obstacle Pagnotta faced was his computer. "It takes a long time," he said. "That was probably the most frustrating thing."


Despite his computer’s speed, Pagnotta prevailed. Since he produced Monster, he admits he hasn’t done much in terms of video. Maybe winning this year’s second prize will change his mind.

Cyberkid 2
Gerald Hartke, Jr. captured third prize with Cyberkid 2, a parody of the hit movie Terminator 2. At times, this sequel to another of Hartke’s videos left viewers a little confused by personal "inside jokes," but our judges were quite impressed by the use of sound design and other visual effects he used.


During production, he used a Canon A-1 digital/Hi8 camcorder. A Videonics MX-1 digital video mixer and Mackie Designs audio mixer were used during post-production, while two Sony EVC-200 Hi8 VTRs and a Nady microphone finished off his equipment list.


A simple, inexpensive re-wiring trick helped Hartke achieve superb surround sound, leaving our judges in awe. He pushed the MX-1 to the limit with chromakeying and other visual effects, and displayed impressive editing techniques. Hartke showed a true understanding of action sequences that kept the video moving at a quick pace.


The production took approximately three years to complete, as it was a part-time project. Hartke said that the time-span was probably the biggest obstacle he had to overcome.


"It was hard to keep the continuity," he said.

Be an Angel
This year’s DTV Bonus Award goes to Luett Hanson for her promotional video on a heartwarming volunteer project called Angels For Animals. The Angels project is dedicated to sheltering and finding homes for stray dogs and cats.


For Hanson, who started shooting video about 10 years ago, the Angels For Animals project was something close to her heart. Her relationship with Angels began when she and her husband adopted an abandoned cat from the shelter. Last winter, when they brought in a cat who needed sheltering, volunteers at the shelter expressed an interest in having a promotional video produced, and Hanson offered her services.


She said the majority of the video took approximately three months to complete and editing took about three eight-hour days.


The most difficult part of the process, according to Hanson, was putting the components of a digital editing system together. She said her husband was a tremendous help in the process.


Learning digital video editing was important to Hanson on both a personal and professional level. She wanted to learn more about the process so she could implement it in the classes she teaches at Kent University.


Best of luck to Hanson, and to the Angels For Animals Project.

Just Another Day
This submission came to us from 16-year-old Ryan Bank of Deerfield, Illinois. Just Another Day is a 10-minute documentary that gets up-close and personal on the growing population of homeless people in his home town.


"It seemed like a topic that hadn’t been dealt with in a while," said Bank. "In doing some research, I discovered that of all the surrounding counties, we were the wealthiest and the smallest in population, however the number of homeless people here is estimated at 1200."


Because of his admiration for evening-magazine type stories, Bank used that style as a template in putting this project together.


When he’s not producing award-winning documentaries, Bank keeps himself busy as an active participant at WDHS, a student-run TV station at Deerfield High School, where he produces a monthly program. With all of this experience working with video, what are Bank’s future plans?


"I plan on attending college and pursuing this art," he said. "I’m still trying to decide whether I want to study film or continue with video for a possible career in television."


Whatever he decides, we wish him the best of luck.