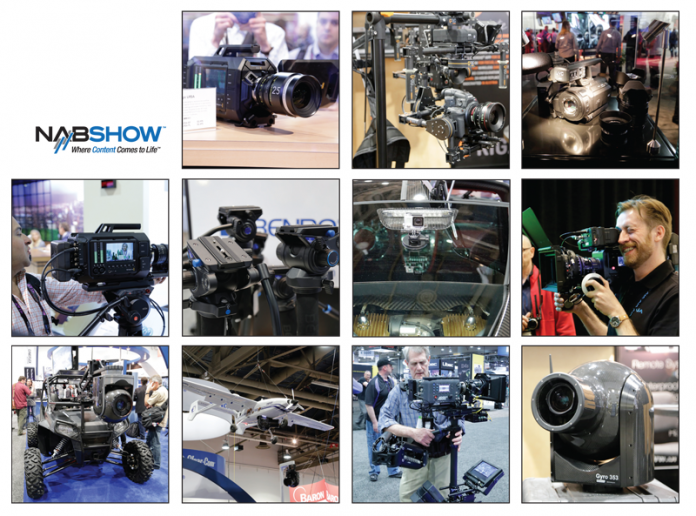 3D Takes a Back Seat

With the exception of big budget feature film, there was very little in 3D production and post solutions shown at NAB 2014. This is a stark change from the past few years when tools and workflows for nearly any 3D budget production were displayed. With the exception of projector manufacturer Christie who was showcasing their 6-primary laser 4K projection theater experience, the broadcasters at the show had virtually no interest in 3D technology. Japanese broadcaster NHK's 8K theater and camera demo showed that even for sports, 8K was a better option than 3D. The footage shown by NHK included shots in 8K from the 2012 FIFA Club World Cup that had amazing detail with the width of the soccer field in focus with 16 times the resolution of HD. It's interesting to note that Japan’s Ministry of Internal Affairs and Communications has announced plans to roll out 8K satellite broadcasting in time for the Tokyo 2020 Olympic Games.

4K For the Masses

Last year saw an abundance of 4K cameras and this year’s NAB Show was no different. Perhaps, more significantly though, this year there were tools for every stage of a 4K workflow and for nearly every budget. NVIDIA showed off its Quadro K6000 graphics card installed in an HP Z workstation that was able to play REDCODE RAW (R3D) in real-time at 4K resolution, even after adding minor color corrections in Adobe Premiere Pro. In the past you needed a RED ROCKET card for 4K REDCODE playback in real-time. We’re hoping this added competition will force video card prices down.

NAB 2014 showed a clear path for 4K not just for feature film but for TV and online video as well. At the show, broadcasters from major networks, cable networks and college stations were talking about their upgrade to 4K. A walk around NAB 2014’s exhibit floor found broadcast video switchers, field recorders, media encoders, post-production software and monitors, all built for 4K and most at prices not much higher than HD gear. Nearly all of the new versions of post-production software exhibiting this year supported 4K. Some companies were showing the advantages of shooting 4K for an HD delivery similar to the way many TV shows once would shoot 35mm film for SD broadcast. With camera and post-production equipment prices falling so quickly, we expect the changeover to 4K won't take anywhere near as long as the SD to HD conversion.

Over the past few years at the NAB Show, there has been a growing interest in lighting instruments that draw less power and create less heat. There has been an increasing number of LED panels and CFL softboxes shown with the traditional tungsten and HMI lights. At NAB 2014, LED lighting was almost exclusively all that was displayed, and not just panels and rings, but even Fresnels and ellipsoidals. Mole-Richardson, ARRI, Manfrotto, and Litepanels were among the many manufacturers that displayed full lines of LED lights.

In Need of Support

As cameras become increasingly smaller and lighter, the need for camera support seems to grow. The usual mix of pods, sliders, dollies, jibs and cranes could be found at NAB 2014, but this year gimbals were all the rage. From handheld mechanical stabilizers to servo controlled models like the Movi M5 to remote control units like the one shown by JVC, it seemed like everywhere you turned there was another three-axis gimbal.

Looking to the Skies

Helicopters, quadcopters and drones were also the rage at NAB 2014, showcasing new ways to get aerial shots and add production value to your projects. The increase in product range saw a decrease in pricing. Additionally, drones have increased in size to be able to handle larger and heavier cameras.

For years camcorders have been made with fixed lenses that are limiting in the shots that can be achieved. With DSLRs you can change lenses, but the controls for video are limited which is challenging for camcorder shooters who are accustomed to greater control. NAB 2014 saw more in the category of lower price cameras which offer interchangeable lenses as well as more cameras in the shape of, and that operate, like a camcorder. This is a trend that would be great to see continue.

For many, going from shooting with camcorders to shooting with DSLRs is a hard transition due in part to the lack of zoom lenses with integrated controllers. Since many people are shooting video with smaller cameras and DSLRs, hopefully more lens makers will note the desire for ENG style zooms for the various available cameras. RED showcased this point at their booth offering 4K broadcast solutions using their EPIC camera with a Fujinon ENG style zoom lens with a zoom servo and rocker control.

For years 35mm film has been standard for feature film production. The cameras, lenses and camera accessories were all built with little variation. As cinematographers move toward digital cameras for feature film production, the lines between film and video equipment continue to blur. For many, the standard 35mm image capture size is lost. At NAB 2014, most of the high-end 4K cameras had Super 35mm image sensors. With Sony and JVC showing off their 4K cameras with the same Super 35mm sized sensors, it seems like a new standard is emerging. If you shoot with different cameras on the same production, getting standard cameras will make it much easier to maintain depth of field in your shots if the image sensors are the same size.

New Standards for Codec and Resolution

While H.264 is still the dominant codec used for online video and Blu-ray, H.265 (HEVC) is well on it's way to being the new standard codec for compressed video. HEVC is said to be around 50 percent more efficient than H.264 for compressing video. A demo from DivX showed that the new HEVC codec had even less artifacting and a sharper image than H.264, even when used for low resolution SD footage at lower bitrates. 4K video files that are four times the resolution but only twice the file size of HD files will really help 4K delivery.

One of the other challenges 4K production initially faced was the wide array of resolutions that were called 4K. Now most companies are supporting either the Ultra HD resolution of 3840×2160 or the Digital Cinema Initiative's 4K resolution of 4096×2160. Some support both. While 4K standards do support multiple frame rates for video, interlacing is not supported. When the conversion to 4K happens, interlacing will be gone.

At NAB 2014, Intel showed how they can now connect two computers together with a single Thunderbolt cable creating a 10-gigabit network. The TCP/IP network created was able to transfer a 1GB video file in seconds from a PC to a Mac. While the Thunderbolt networking is currently limited to two computers, Intel is working on expanding the capabilities to allow multiple machines to be connected.

Thunderbolt looks like it could be for 4K what FireWire was for DV. External hard drives and RAIDs with Thunderbolt ports have been out for a while now, but some new monitors can be connected directly with the port. Cameras such as the Blackmagic Production Camera 4K and AJA's CION have Thunderbolt ports. NAB 2014 featured many new applications for the Thunderbolt 2 port. A Thunderbolt 2 port allows for transfer of data at speeds up to 20Gb/s making it a great option for external media.

While many are still skeptical of commercial cloud solutions, there was a push on the floor for creating your own personal cloud. With storage prices plummeting, and Thunderbolt 2 offering incredible transfer speeds, RAIDs are now a viable solution for every video professional. The storage demands of 4K are now reasonable.

Conclusion: A Glimpse of Things to Come

It's not a matter of if 4K broadcasting will occur, it's a matter of when. NAB 2014 definitely illustrated the extensive availability of 4K cameras, as well as the gear to support 4K post-production workflow and delivery that will speed up conversion from HD to 4K. This will happen a lot quicker than the SD to HD conversion. For many video professionals, now's the time to consider upgrading your gear to be ahead of the curve so you can maximize opportunities for 4K content creation.

1. Sony's A7S mirrorless camera has a Super 35mm image sensor which delivers impressive footage in low light. It records HD in camera, 4K to external recorders via HDMI and weighs just over a pound. Most cameras this size have APS-C or Micro Four Thirds image sensors that make it hard to achieve shallow depth of field shots. The larger image sensor on the A7S also helps reduce noise in the image. That, combined with the E-mount lens, that offers a variety of lightweight lenses and the ability to use adapters for other common lens mounts, makes this new Sony camera very appealing. The A7S is expected to retail for around $2,000.

2. An Atomos Shogun 4K recorder/monitor can record 4K and HD in Cinema DNG raw, Apple ProRes or Avid DNxHD. Most small cameras record in very high compression and limited color space which can make doing effects like chromakeying or color correction challenging. The Shogun allows you to record with low compression to standard 2.5-inch SSDs or hard drives. If that's not enough, the Shogun has a 7-inch 1920×1080 monitor filled with useful features like focus peaking, false color, zebra patterns, waveform and vectorscope. The Shogun has XLR, HDMI and SDI inputs and will retail for about $2,000.

3. Glide Gear PRO Jib and DNA 6001 Vest and Arm Stabilization Kit is amazingly versatile. It combines the mobility and stabilization of shooting with a sled and vest style system with the wide range of shot options of a small jib arm. The unit is a great option for small cameras in locations where using a dolly or jib is impracticable. The whole kit is estimated to retail soon for around $800.

Odin Lindblom is an award-winning filmmaker whose work includes film, commercials, and corporate video. Odin offers a full range of services at The Mothership which includes production, post and VFX.