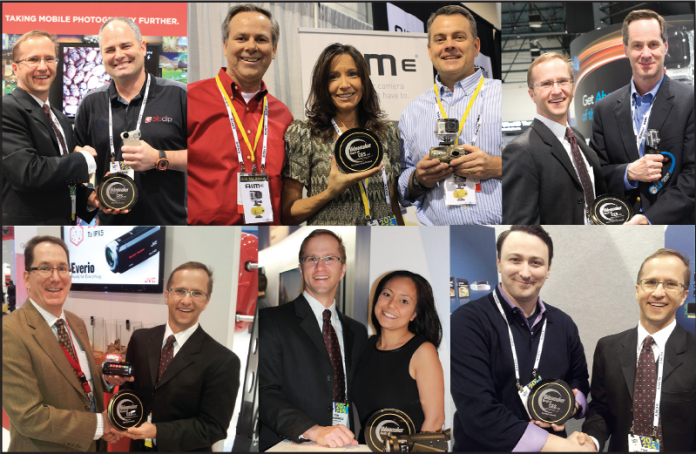 The Sony FDR-AX100 is a 4K Handycam that costs $2,000. You get a lot of camera for the price here, especially considering 4K video at 30fps had been coming in around the $5,000 range. We know Sony has the FDR-AX1 which at $4,500 still has its merits, but as a much smaller camcorder that takes SD cards, has a 1-inch sensor and can still output 4K video with an HDMI cable, the AX100 will be tempting lots more videographers. The biggest loss may be the audio control with XLR inputs, but for the $2.5k difference, generally an audio work around is possible. Even if more cameras bring 4K resolution to the $2,000 price point or less, the AX100 will be the first to have done it. We acknowledge an exceptional camcorder and award the Sony FDR-AX100 Best Camera of CES 2014.
Advertisement

The Jigabot AIMe is an automated camera controller that can compose a shot to keep you in frame. AIMe uses a beacon called EmIT which is tracked by multiple AIMes, despite being attached to the moving subject and a small 2-inch square. Within 150 feet, AIMe can track the EmIT 360 degrees horizontally and 120 degrees vertically. The initial mounts are for some smartphones, standard cameras and GoPro cameras. Some cameras can use the same mounting setup on the top and bottom for some excellent versatility. One of the best aspects about AIMe is that she seems fun. Yes, Jigabot refers to their product AIMe as a female. She operates the camera, works well with others and eliminates the need for another crew member. The cost for AIMe is $300, and for bringing a new angle to automatic camera operation, we award Jigabot’s AIMe our Most Innovative Award of CES 2014.

The HP Z1 G2 is an all in one workstation capable of having a touch screen and Thunderbolt 2. The entire front of the Z1 G2 can be lifted up like a car hood and the components may be upgraded or switched, all with your hands. This makes it very user friendly, yet powerful. There is space for three hard drives which is very important for video editors who want to dedicate drives to storage, an operating system, or a RAID configuration. The 27-inches of screen on the Z1 G2 and potential for an anti-glare screen are plenty for most people and will definitely help the editing process. For being the workstation that up and coming video producers need to consider, we award the HP Z1 G2 our Best Workstation of CES 2014 Award.

The Steadicam Curve is a handheld stabilizer that is specifically made for GoPro cameras. The Curve has an adjustable counterweight, with fine-tuning for the right balance, which is especially necessary when adding the GoPro LCD BacPac. Since it’s compatible with very small cameras, the Curve need only weigh 9 ounces. The aluminum action camera stabilizer was actually available for a short time before CES, but a new stage and a fun range of colors do well for a good product that will remain fresh with many. Good floating stabilization hardly ever comes in at $100, so that’s just one of the reasons we award the Best Support of CES 2014 to the Steadicam Curve.

The olloclip 4-IN-1 for iPhone 4/4S and 5/5S is an attachment for the rear-facing camera. The options beyond your iPhone’s standard lens are 10x Macro, 15x Macro, Wide-Angle and Fisheye, and should be more than enough for the quick photo and video opportunities that life presents us. These are coated glass, multi-element lenses, housed in aircraft grade anodized aluminum. The attachment for the iPhone is plastic and should make a seamless and secure fit. The cost is reasonable considering the lens options you're getting, $70 for the 4-IN-1 alone and $100 with case options for the iPhone 4 or 5 body. With all the smartphone products at CES, we had a lot to go through, but with excellent build quality and versatility DSLRs would kill for, the olloclip 4-IN-1 is very deserving of the Best Accessory of CES 2014.

The Dell 28 Ultra HD Monitor is a 4K monitor for $700. This is what many videographers and video editors have been waiting for, 3840×2160 resolution for the early adopters of 4K cameras. Features on the Dell 28 Ultra HD Monitor will help many users, including the ability to pivot to portrait mode and connect mobile devices. The availability of apps will help tailor the monitor to become a versatile and central part of a workstation. There are 24 and 32-inch options from Dell that also display 4K, and they add very accurate colors with PremierColor, but both cost more than the 28-inch monitor. Dell backs up one of the most aggressively priced 4K monitors yet, with a Premium Panel Guarantee, so take hold of the warranty if you're taking this step to a much more attainable 4K monitor. For pushing the price of 4K displays further into consideration we award Dell’s 28-inch Ultra HD Monitor a CES 2014 Spotlight Award.

The Buffalo MiniStation Air is a wireless portable hard drive with 1TB of space that can be connected to as many as 8 devices. A USB 3.0 port helps for fast file transfers if you can manage a direct connection to a Mac or PC. It allows a hotspot to be setup and can also charge a device via USB. The battery life for the MiniStation Air itself is 10 hours. It joins fellow MiniStation portable hard drives by adding a wireless option. It wasn’t long ago that a wireless hard drive was limited to less than 32GB, so with 1TB we’re now talking about some serious video storage. At $200, and supported by Android and iOS apps, we award Buffalo’s MiniStation Air a CES 2014 Spotlight Award.

The JVC Everio GZ-R70 is a durable camcorder that maintains some of the favorite features in JVC's long-running line of Everio camcorders. With most things the same, the difference is in how you'll treat the GZ-R70; put it in frozen water, drop it (from less than five feet), and with the internal battery, don’t worry about exchanging energy packs in a swirling cloud of dust. Even though it looks the same as many camcorders out there, and the technical specs will be familiar, you'll enjoy the physical differences that are shown best through demonstration. We really appreciate that JVC brings Quad-proof to what is essentially its mid-range camcorder. For being one of the first action cameras of its form factor, we award the GZ-R70 a CES 2014 Spotlight Award.

The Lexar Professional Workflow HR1 helps eliminate your wait to offload media cards with a four-bay USB 3.0 reader. The simultaneous transfer for up to four cards keeps you in creative mode and takes away tedious work to give you valuable time. The supported cards include SDHC/SDXC UHS-I, UDMA 7 CompactFlash, XQD and CFast 2.0. There are individual modules for each one, which will also work independently. It saves time and space, sounds pretty epic right? The hub goes for $80 and the readers for the specific card types start at $30 each. With workflow in the name, we can’t ignore what video production equipment can actually do for a workflow and so we award the Lexar Professional Workflow HR1 a CES 2014 Spotlight Award.

As far as tradeshows go, CES is the largest we have the privilege of attending and without your interest we wouldn't be able to bring your attention to a select few new video production equipment products as we’ve done here. We hope you are fortunate to try out some of these products in the coming months and we’ll keep our eyes and ears peeled for anything that will make video production better. If you think we missed any award-deserving products let us know through comments and feedback.