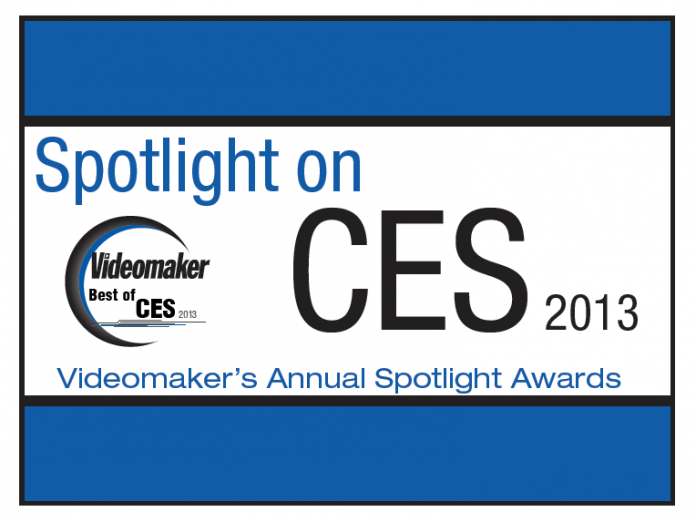 Handing a CEO an award for an exceptional product will never get old. At the International CES there is the extra excitement of a proud display, and Videomaker was pleased to give product manufacturers something more to smile about than getting through the whirlwind days of CES. Our job included finding and reporting products that will advance and help videographers make better video. Here are some of the best that you will want to check out in 2013.

Read about the JVC GC-PX100 and you should get excited about the speedy recording capability of this camera. Videomaker was pleased to see an update to the 2011 Best Hybrid Camera/Camcorder, and from our hands-on look, the GC-PX100 should be an appropriate and excellent step forward. There's something to be said about a camera that can match a host of recording situations. The 36Mb/s bitrate and capacity for getting 600 frames per second should be a blast to use. With a couple looks at the camera itself, you're probably wondering just how well it shoots, and we share in your anticipation for this one as it becomes available soon. The $1,000 price is certainly within reach for many. We had plenty of deliberation, and impromptu polls going on, and ultimately, our noses point to JVC's unique, and formidable GC-PX100 as a winner.

Seagate wants movies and music to be easily accessible around the home. We hear this and think, "we want clips of footage and audio to be easily accessible around a business," the Seagate Central can act as a backup for your media. It also makes this media very accessible, from the television, to any device on the DLNA network, as well as tablets and smartphones. Of course the Seagate Central helps in two ways with media upload from mobile devices, and the next question for early camera adopters is, "Can all the Wi-Fi enabled cameras send their footage to this shared storage?" To extend the shared content, Seagate Central may send large files with private email invitations – which could be a client or video-producing colleague. 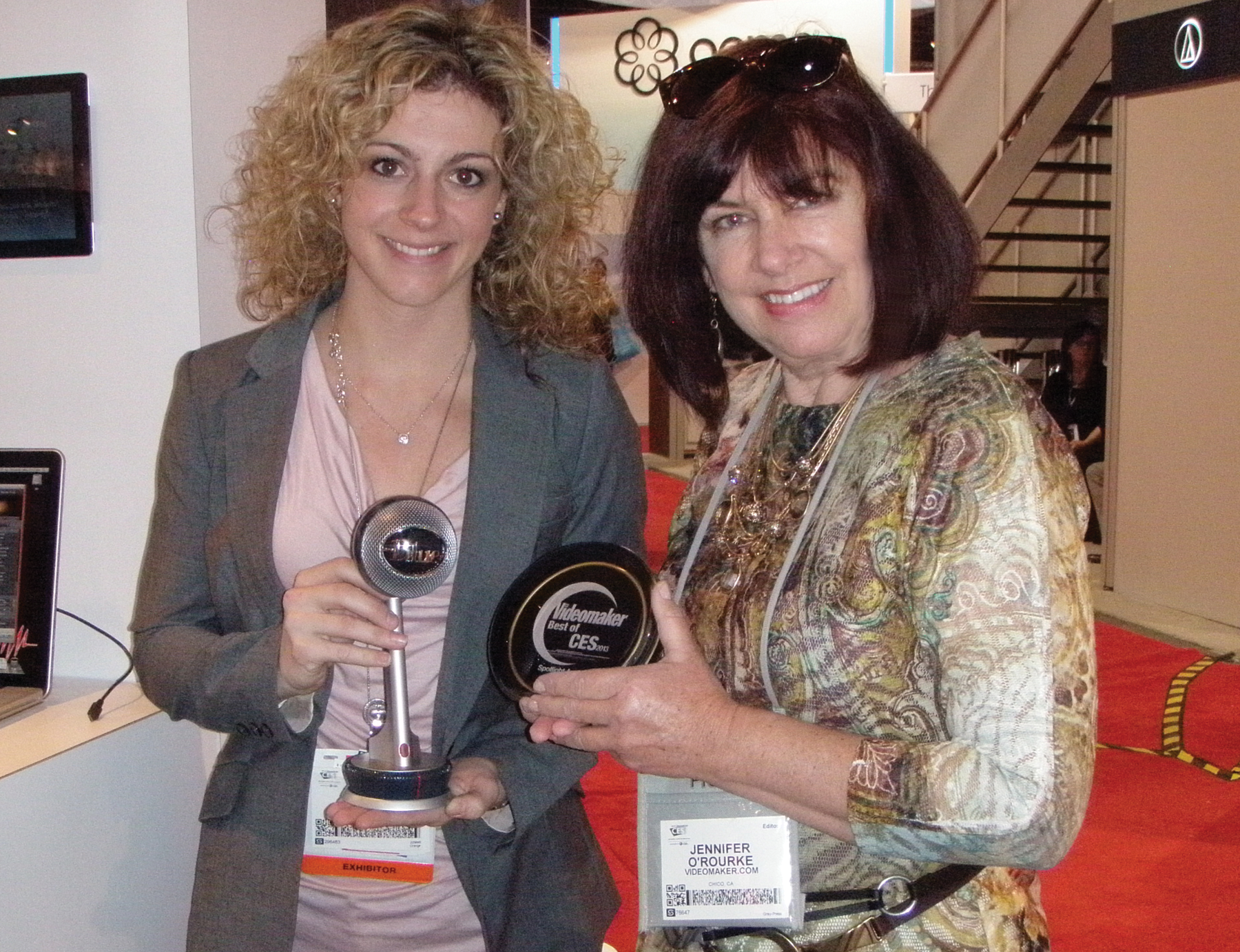 Named after the famous Loch Ness water serpent, Blue Microphones’ Nessie was seen at CES 2013, not in a murky Scottish lake. Nessie can adapt according to who or what is projecting sound, as any elusive beast knows. In all seriousness, it's a microphone that has a built-in pop filter, built-in shockmount, adjusts EQ, applies de-essers and can adjust levels in real-time. You get to direct Nessie into the nets of vocals, instruments or raw audio. Getting Nessie to sound back is also important, so headphone monitoring has zero latency. The microphone can adjust in a "serpentine" manner and captures sound in a cardiod pattern. The connection for recording will come via USB 2.0 and can be adapted for an iPad. Nessie can be tamed of course, to let you operate manually if you prefer to do your own equalizing work. 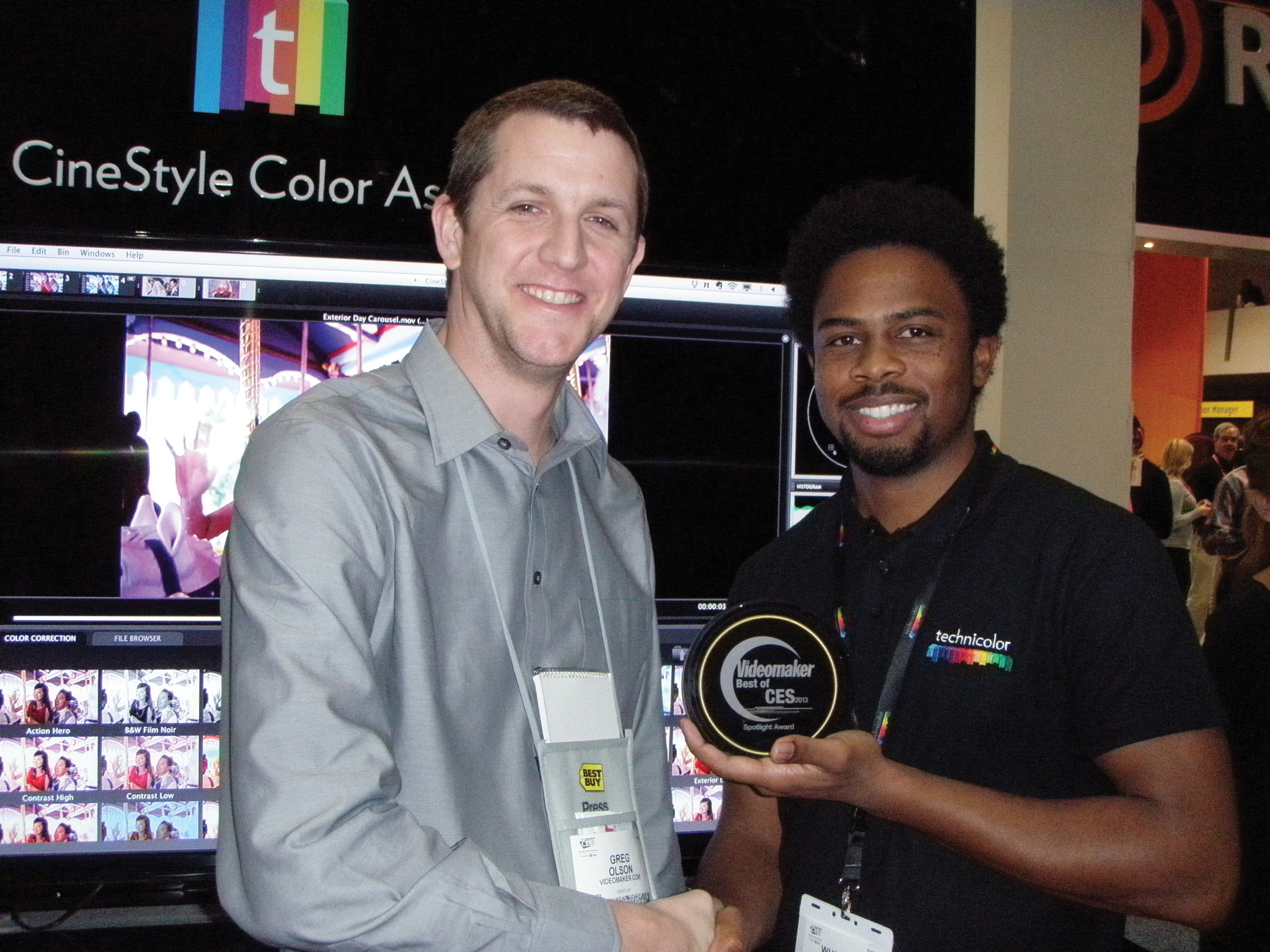 We know Technicolor for its name in Hollywood, now many consumers can experience great color correction with CineStyle Color Assist. For $100 the video styling software is presented in an easy-to-follow interface and includes 25 CineStyle Looks: presets designed by professional colorists. The real magic will come with your own color grading and non-destructive corrections. For those that feel that the looks come close, but need a bit more work, CineStyle Color Assist allows the user to manipulate the image using a three-way color corrector and curves. CineStyle Color Assist is software that will work directly with Final Cut Pro 7 and Premiere Pro CS5.5 and CS6. 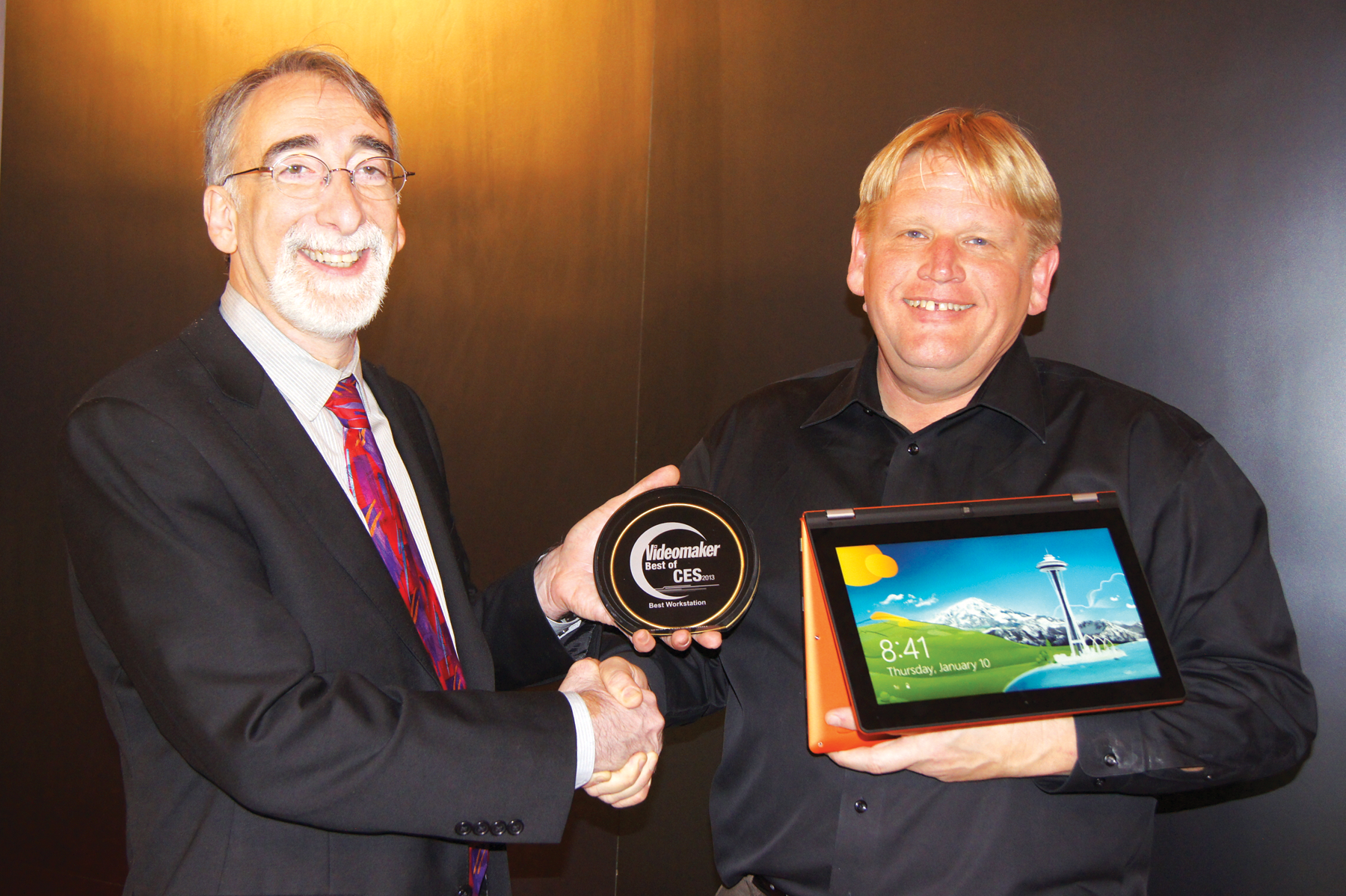 This computer reprises the multi-functioning, folding fun that is found in the IdeaPad Yoga 11. The IdeaPad Yoga 11S is quite a bit more adept with capacity for four times the DDR3 memory and as much as 256GB SSD storage. The 11S version does drop battery life substantially from 13 hours to six, and gains a handful of ounces in weight, but the other operating features are intact and excellent. Though we oftentimes recommend using a display of at least 15-inches, we'd certainly compromise for 11.6-inches if it means the laptop can double as a tablet, and triple as a display in tent or stand form.

CyberLink is a staple when it comes to editing software. Now the speedy video editing software, PowerDirector, has made it to the tablet. The process in PowerDirector Mobile is broken down into five steps, import, edit, style, preview, and produce. Any media stored on your tablet is game to be imported and edited, and many cameras now have the capability of sending video to tablets with a Wi-Fi connection. The editing format uses a storyboard interface, with video clips marked by play buttons, led one after the other. The Style section includes theme templates as well as titles, credits and effects, and with real-time preview. If you have more work to do at this stage, you can send your project to a computer to be completed in PowerDirector 11, but if you're done, it's easy to share. As a complete editing solution, CyberLink delivered to Windows 8 users with PowerDirector Mobile, available in the Windows Store for $15. 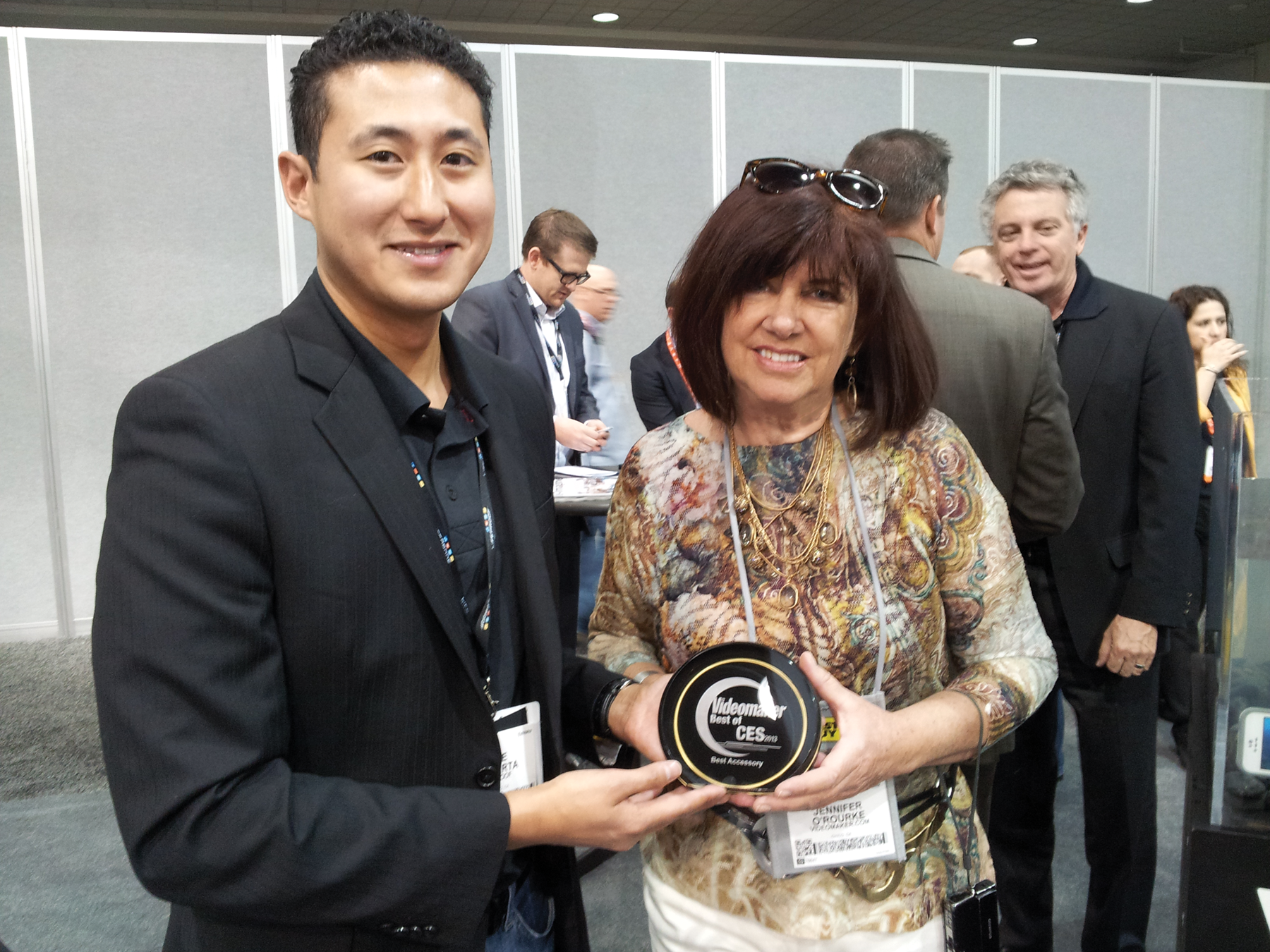 The four- proof cases for Apple's iPad, iTouch, iPhone 4/4S, and iPhone 5 are seamless. The excellent design is not only seamless to protect the encased device, but to maintain the look of Apple's distinctive products – so well that you might think it's a new model. There is no space in the case to allow dirt in and the seal is strong enough to go 6.6-feet or two meters beneath the surface, so just stay off the high dive. At another extreme, the cases can endure snow and the shock of impacts. The end result turns your smartphone into a waterproof camera, and that makes for a much better experience shooting video. 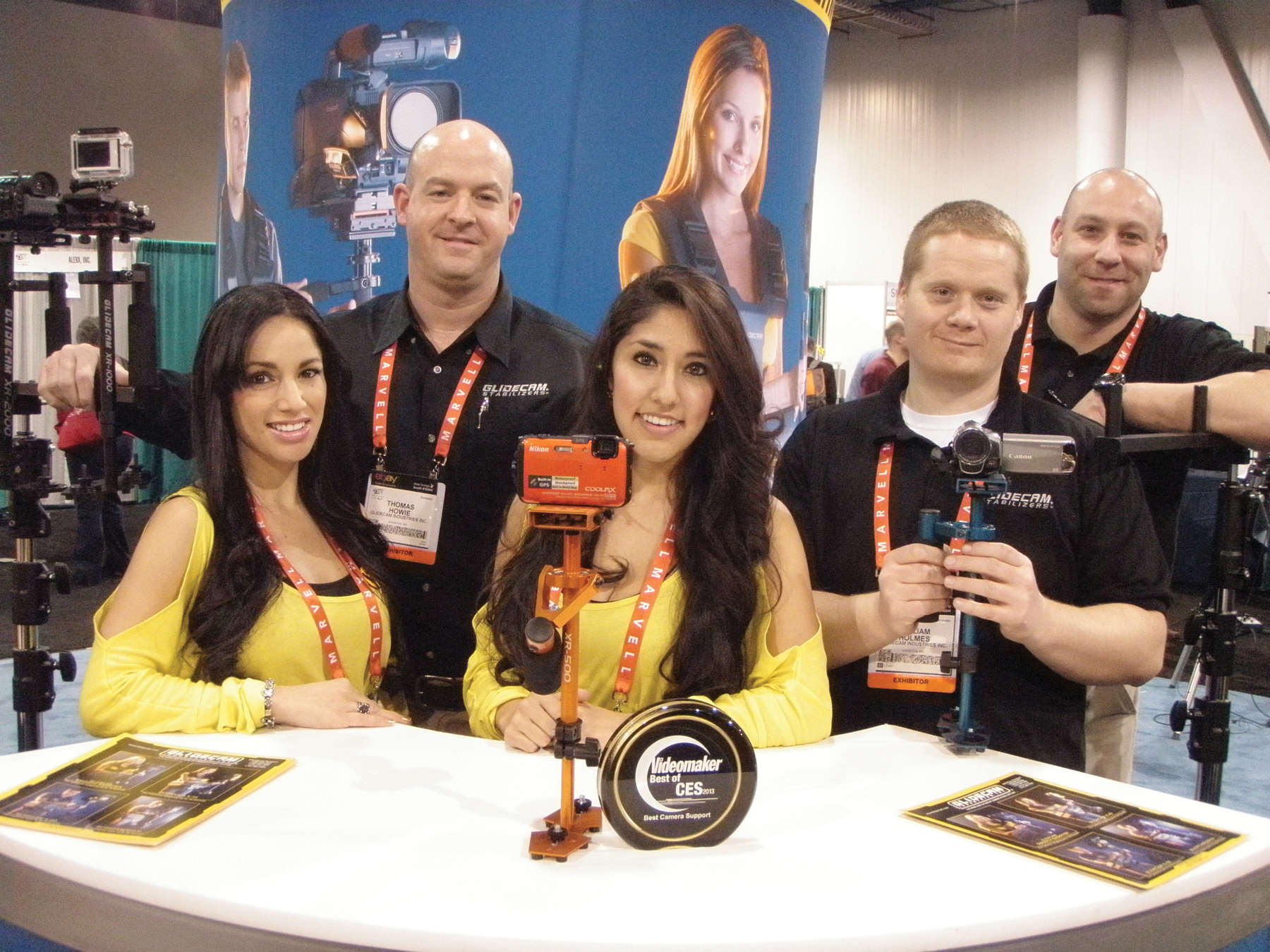 Glidecam showed up at CES for the first time this year, and brought a true consumer solution for steady shooting for small-form cameras. With a working title of XR-500, Glidecam's iGlide ($129) is a handheld stabilizer designed for any camera or phone that weighs between six and 12 ounces. Whether it's a compact camera, iPhone (adapter sold separately!) or action camera, it can get big smooth shots out of small recording devices. 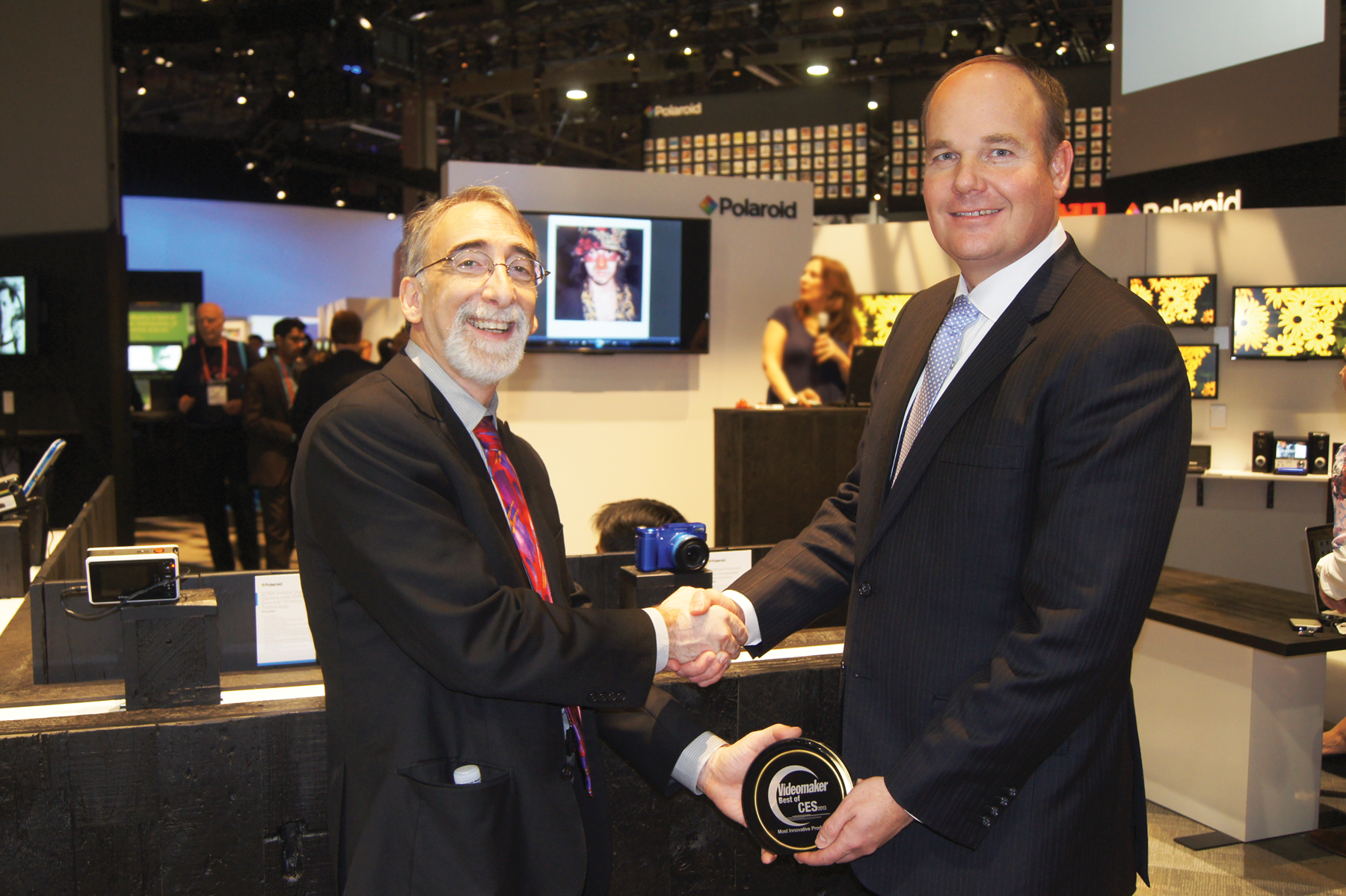 The Polaroid IM1836 comes from Sakar and has the resemblance of the Nikon 1 J2, with an Android operating system (like a certain Samsung GALAXY Camera). What that leaves us with is a compact camera that competes with some of the biggest news makers of 2012. The detachable lens that comes with the IM1836 is F3.8 10mm-30mm. The ability to provide photos to friends is something Polaroid excelled in before we learned that an Android wasn't just a character from science fiction. So to bring Polaroid up to date, the IM1836 has 1080p video, built in Wi-Fi, and a touch screen that needs no shaking to develop an image, and the 3.5-inch LCD isn't too shabby. Another way to send captured media out of the IM1836 is via HDMI or SD card, so there's some great functions here, even if audio seems lost amid the smooth white exterior. The $400 price for a compact camera with interchangeable lenses is plenty enticing. 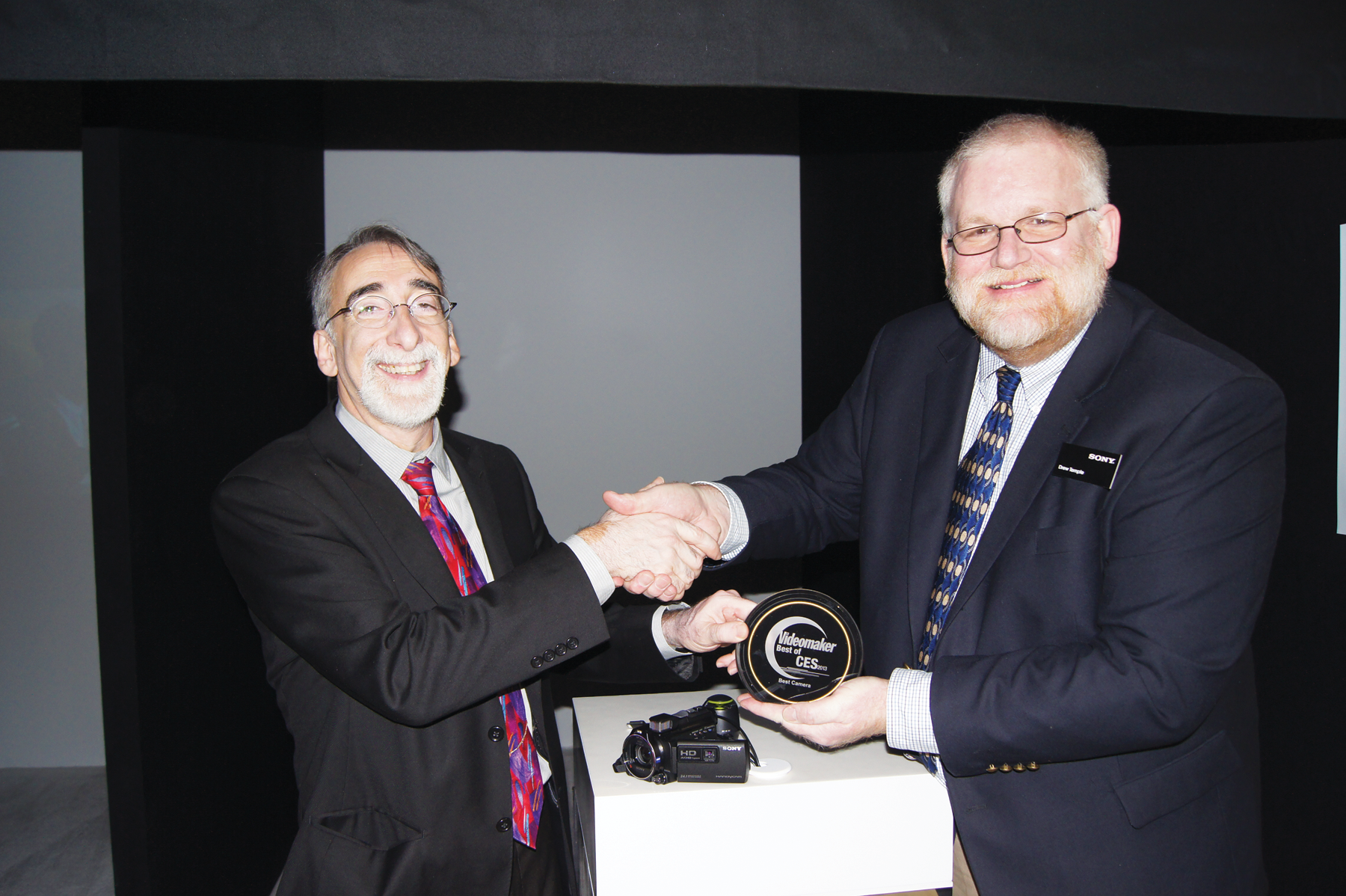 It may be more costly than some of its counterparts at CES 2013, but the group of features is unequaled. Between the quality video, compact design, and strong audio, it is a projector that is brighter than before (brightest in Sony's Handycam line at 35 lumens), and then on the other side of that projector is a Micro HDMI input. You get to shoot great video, play it back at 100-inches, or project a Micro HDMI source. It was hard not to like the capabilities that the Sony HDR-PJ790 provides. 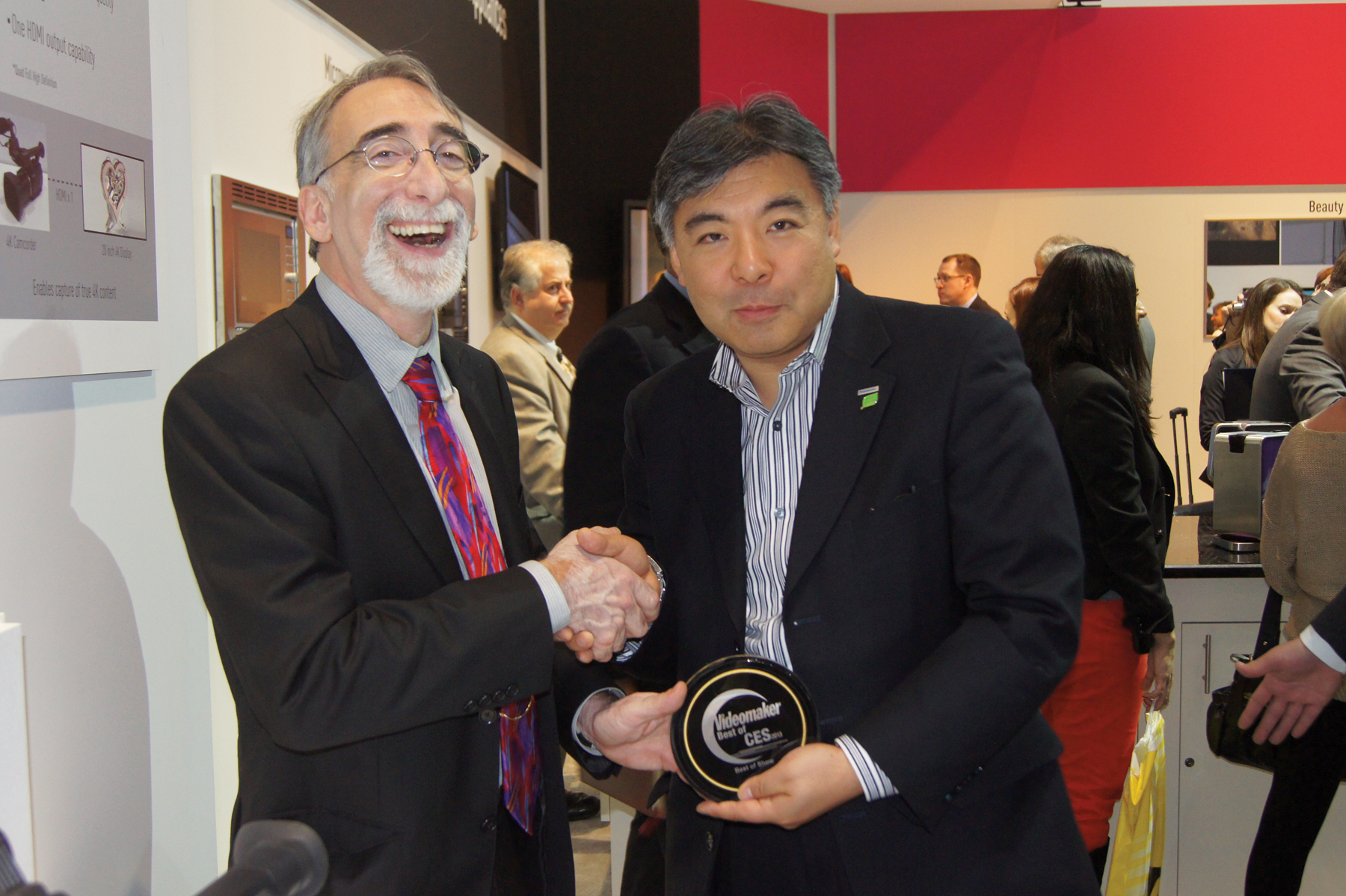 With the Panasonic 4k camera feeding a live monitor, the Videomaker staff went nerdy and got extremely close up. Our attempt to identify individual pixels failed. The ultra high resolution is what was the best at the show, and while we don't have a model number for the camera, we do know that 4k video was very prevalent at the show, demonstrating its status as an upcoming trend. As far as we can tell, the Panasonic 4k camera should be excellent, and the prototype bears some resemblance to the AG-AC90, so our hope is that the price will too!
We'll keep our eyes peeled for this camera and if all goes well, we'll be able to share more about Panasonic's first 4k camera for consumers.

Camera sizes weren't a huge issue (in form or component) this year, but rather functionality. Another standout idea from our awarded products is how these new products should smooth out our workflows; from encased phones that can shoot underwater, attaching lenses to an Android camera and mics that adjust automatically, easy video sharing during production, easy editing on tablets and spreading media throughout your network and finally, to projecting your finished video from the recording device.
Continue to come to us for a videographer’s perspective on new equipment. We strive to provide complete coverage of the best video equipment that is both innovative and effective for helping you create and present stories.