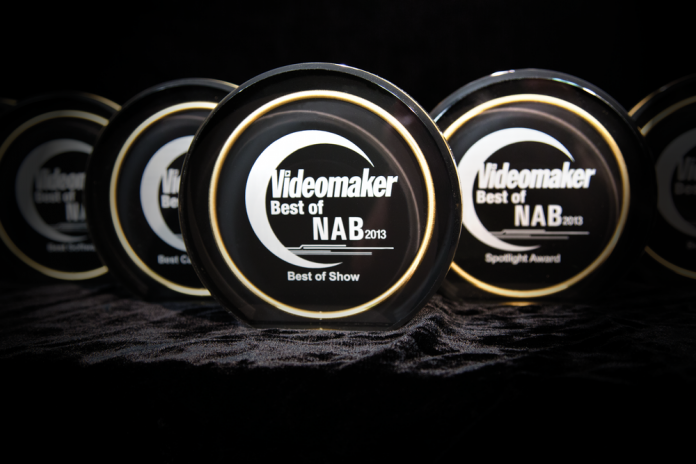 Videographers can take a reprieve from Sin City for a few months before the next tradeshow, and the best part is that manufacturers left us with plenty of new products to stay excited about. There’s been deliberation and not all of these debuted April 8 but the following products will be worth waiting for. Let’s start with the Best of Show award honoring an innovation that combines technology with size and price for an industry first.

The Blackmagic Pocket Cinema Camera is truly a game-changer. Cameras that fit in your pocket have changed a lot in recent years – for example, the option to change out lenses, shoot 3D, access Wi-Fi or operate Android apps – all with quality HD video. The Blackmagic Pocket Cinema Camera has a Super 16 sensor and captures 13 stops of dynamic range for a completely different story. For some, the Micro Four Thirds mount will make adapting difficult, but the open file format – for recording in ProRes 422 and CinemaDNG – shouldn't. 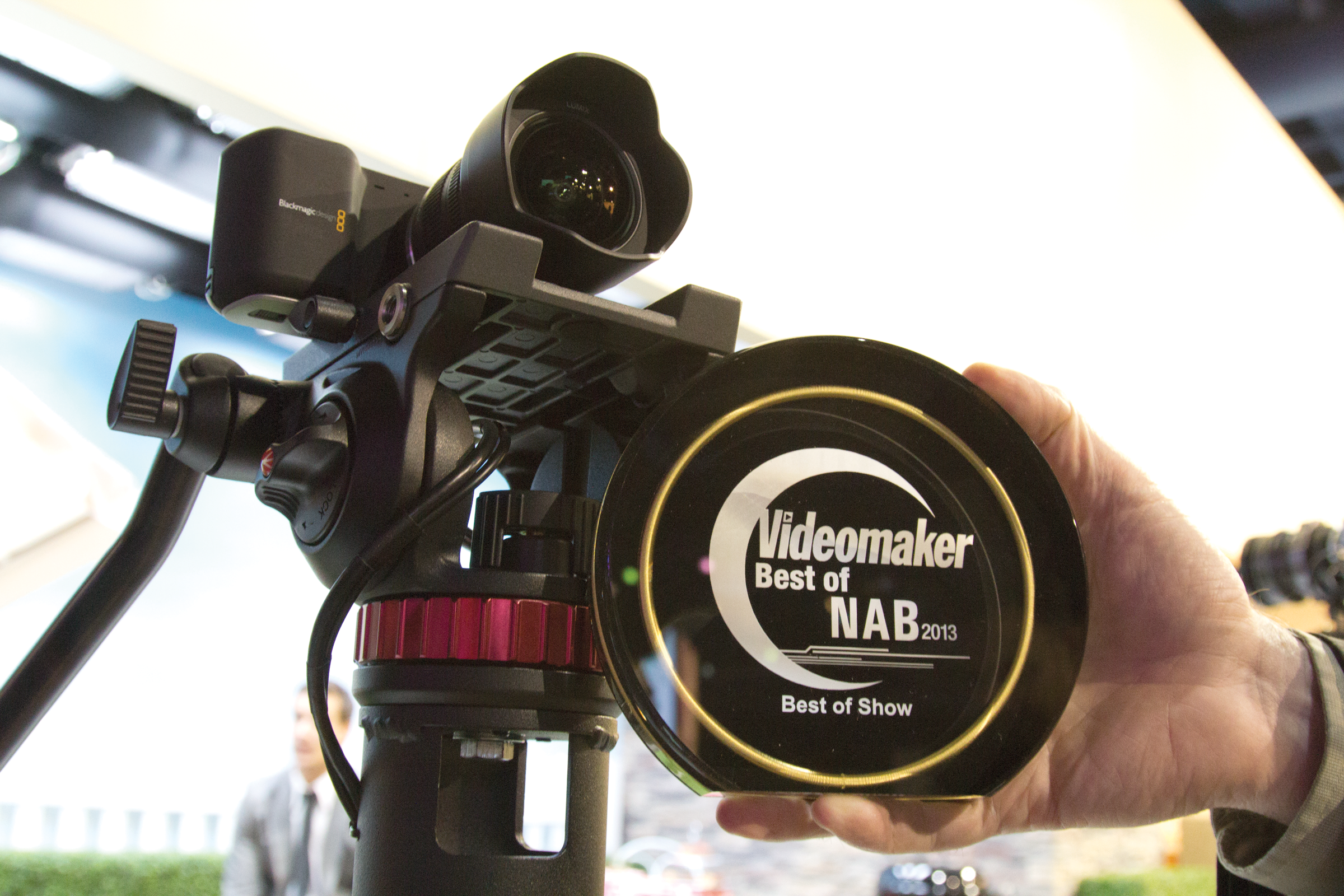 For a little physical analysis, Blackmagic Design opens up the battery compartment and answers the questions for many potential users by providing a removable Nikon EN-EL20 battery and SD card slot. A fully charged battery should allow you to shoot for 50 minutes before you'll want to swap it out. For $995, putting a cinema camera in your pocket has never been so feasible than with the Blackmagic Pocket Cinema Camera.

The team at Blackmagic Design has been hard at work preparing the release of the Blackmagic Production Camera 4K. We may begin with this one by looking at the Blackmagic Cinema Camera, which looks virtually the same, save for a 4K insignia. Go ahead and discover other changes if you’re a continuity master. Some key differences include the jump up to 4k resolution, instead of 2.5k, the Blackmagic Production Camera 4K captures 3840×2160 on its Super 35 sensor. There is one less stop of dynamic range, for 12 total, we certainly wouldn't discard the camera for such an aspect. Otherwise we come up to many of the same features from the older relative, SSD workflow, internal battery, touch screen control, and thus far, compatibility with EF mount lenses. We're thinking we had you at 4k for $4k ($3,995).

Videomaker gets to see lots of different editing software, and Avid's Media Composer 7 is a revamped version of a trusted product. We also take notice of trends and though its no price drop like Autodesk's Smoke 2013, Media Composer 7's starting price at $1,000 definitely reaches a larger base of potential editors. The workflow in Media Composer has traditionally been a very different system from the way other editing programs function, so when we hear that there's been simplification and acceleration of file-based workflow, we trust that Avid is doing this to help editors spend more effort on the production. Specifically real-time productions and global productions at that, Avid Interplay and Interplay Sphere (both sold separately) will allow editors to edit, sync and share their work via the Internet, and for those times when you want your workstation to do tasks in the background, consider automating copying, consolidating, Dynamic Media Folders and transcoding. There's lots more to discover with Media Composer 7 and if you're ready to get Media Composer 6.5 right now, Avid will give you a complimentary upgrade to Media Composer 7 when it is ready. 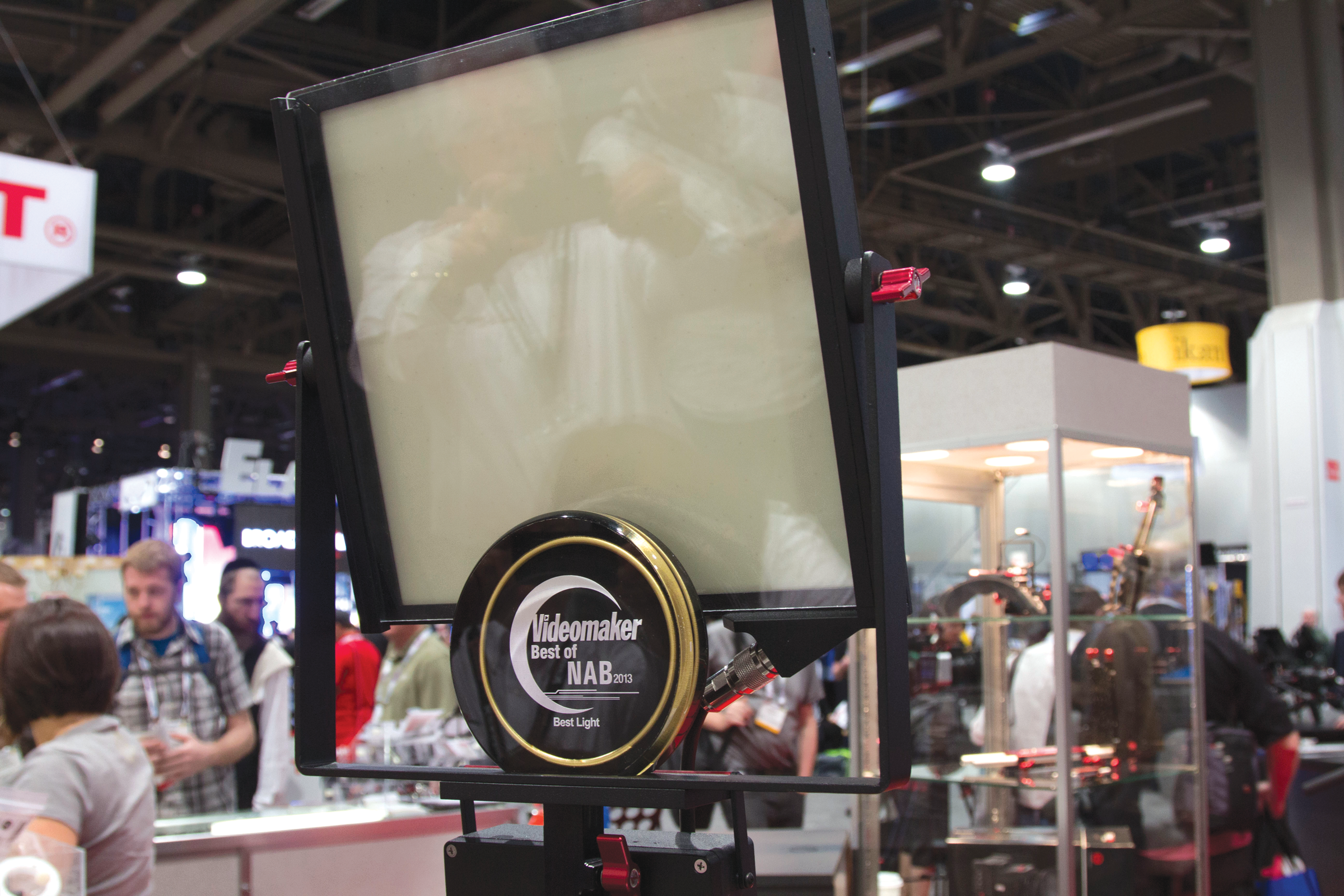 It's hard not to like the light from the Zacuto PlaZma light. This technology has been in development for some time with Zacuto, and shipping models are sure to be scrutinized since the plasma element in video lighting is so young. A characteristic of the PlaZma light is that it is very diffused, and that means it's easy to look at; your talent will appreciate that. Another key characteristic is the flatness of the PlaZma light, enabling more freedom in placement. The tiny pockets of plasma that provide the lighting element have a strong color rendering index at 90 and 2,000 lumens, and won't get hot to the touch. At $1,350 users will enjoy similar costs as LED lights, and the wait will continue until late summer as Zacuto has planned, for the shipping of the PlaZma light.

Manfrotto wants better balance and control with the 500 Fluid Head. The MVH500A 60mm half ball and the MVH500AH flat base both feature a wide base to match the wider base of DSLRs. The plate will also help your adjustments for depending on the length of your attached lens. There are two separate fluid cartridges to provide smooth and precise control of camera packages weighing up to 11lb. The counterbalance is set to 5.3lb. The release for the plate takes one step to unlock and allows for the camera to be removed upward from the tripod. The MVH500A and MVH500AH have an Easy Link 3/8-inch connector for attaching an accessory. The sturdiness of the MVH500A and MVH500AH fluid heads is complemented with aluminum construction, and they cost $200 and $190 respectively for the head only.

The Varizoom Stealthy could really be called The Versatile — it is really designed to meet many different needs. As a handheld stabilizer your camera can float with the Stealthy, the counterweight mainly coming from the length of the leg directly below the camera. A second handheld mode curls that same leg up to rest directly behind the camera. From there you might try the 3-point shooter in which one leg rests against your mid-section and you use two hands. By connecting the gimbaled handle to the straightened leg you create a monopod that can also be combined with an extension. From there you may also go hands off and configure the leg into the long leg of a tabletop tripod. The Stealthy weighs less than 2lb. and can carry cameras up to 3lb. with optional support for 5lb. cameras. Varizoom wants your camera support to be truly Stealthy so the compact handheld configuration can also be attached to a belt for quick-draw video. 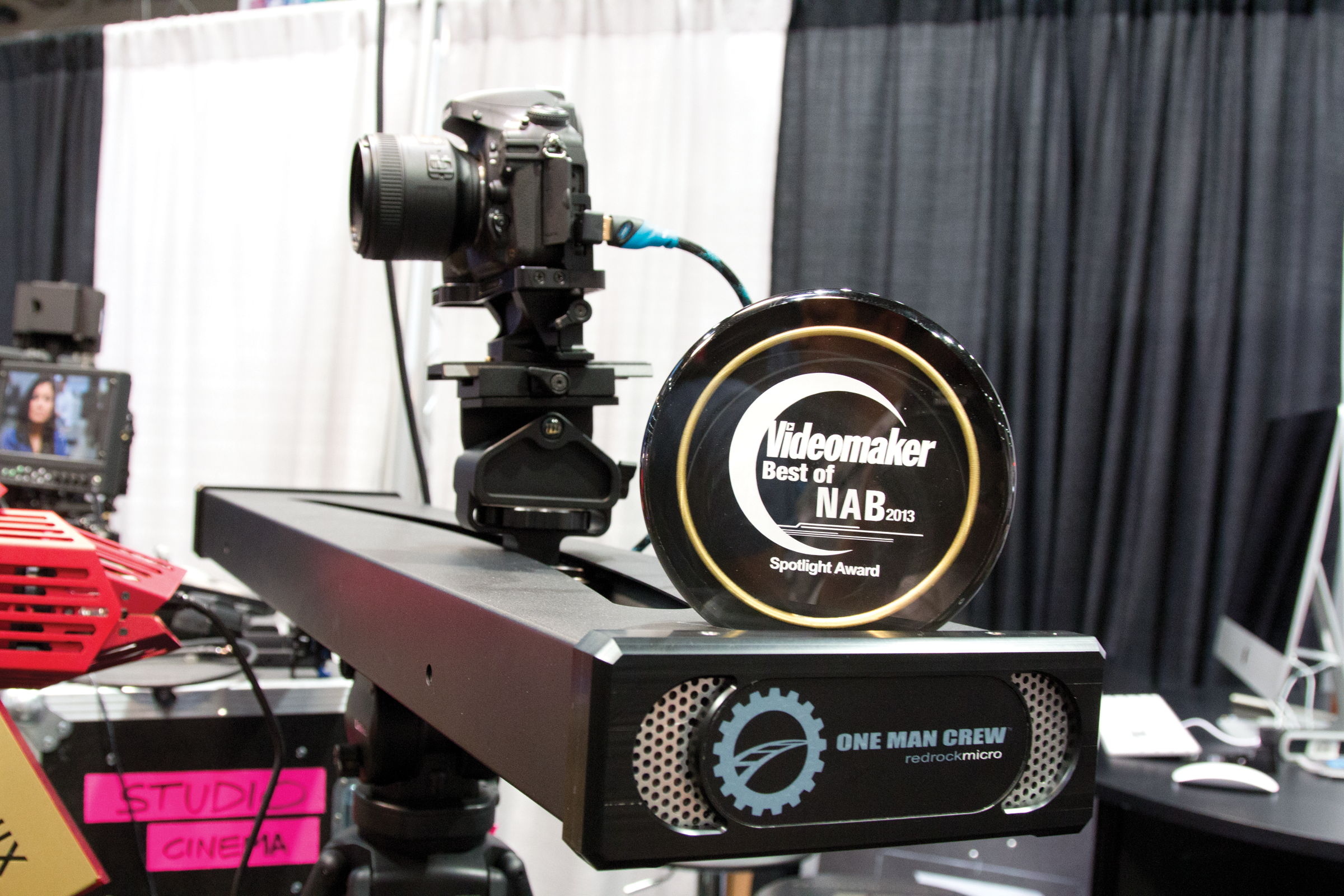 The One Man Crew is a motorized parabolic slider. The movement is what you'd expect from a slider, except in this case, the parabolic motion allows your focus to remain much more accurate – and a follow-focus operator is one job in Hollywood you won’t need to fill. The smooth customizable movement is another job that you might pass off to another, if you had the chance. Having gear that is easy to pack away for travel is simply unbeatable for a one man crew. Redrock Micro put in a lot of thought with this one; easing in and out while the One Man Crew changes direction, and if the lasers for keeping an accurate distance don't get you excited, then we don't know what will. The distance of six feet is the recommended distance, and all that remains is selecting a sliding speed. As for set up, a standard tripod will do, since it comes with a 1/4-inch-20 and 3/8-inch-16 cheeseplate and has a camera capacity of 20lb. Then, for $1,495 they toss the One Man Crew into a case and it’s ready to be shipped.

We've been looking at flying camera stabilizers for quite some time, mainly because cameras are becoming lightweight enough for small craft like the Phantom. Simplicity and cost are what make the Phantom so attractive, and what is even better is the range of shots you’re able to record. The remote controlled unit comes practically ready to fly, and appears to be remarkably good at holding a steady position. The remote control requires 4 AA batteries and will be able to control the Phantom as far as 300 meters. A Naza-M autopilot system helps you achieve a better flight, and allows for some fail-safes including a fly-home feature in case the Phantom ends up out of range. The price range for camera supports can get up there, and for specialized supports it's even tighter – for $679 we imagine many will try their hand at some new flying shots. 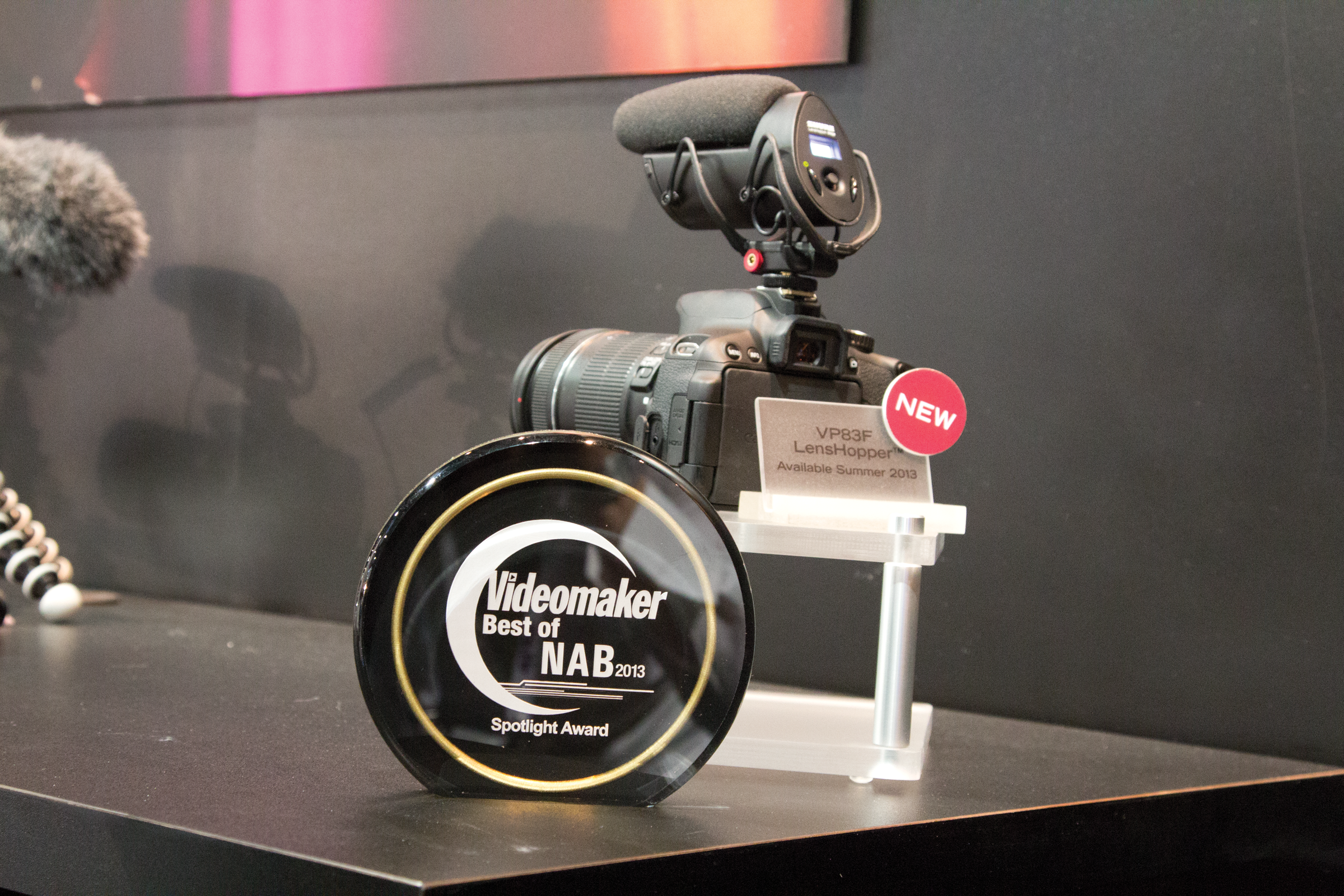 Among the DSLR-centric products we've seen, none have done what Shure does with the LensHopper VP83F. Combine an on-camera shotgun mic with the ability to record audio and you get a very compact and efficient audio option for shooting video. The supercardioid pattern of the VP83F will help you get audio from the right area. And for all the adjustments you'll need to make, there are 60 increments of 1dB to get it just right. The Rycote shock mount and 24-bit/48kHz sampling rate recording should keep your sound professional. With pricing undetermined we'll continue to get creative with our DSLR/audio setup until the VP83F becomes available.

For the run and gun shooter, Canon created the XA25. Top-notch recording is a staple for Canon's cameras, and the XA25 is no exception. It can record AVCHD and MP4 at 28Mb/s and 35Mb/s respectively. Full 1080p at 60 frames per second is a nice benchmark on which the XA25 rests. Another hallmark of quality video is great audio which is a lot easier to capture with XLR inputs, so Canon includes two. Additionally, the XA25 includes HD SDI out, for a clean, professional video signal. When it comes to accessing the video from remote locations, you may or may not care about Wi-Fi, but perhaps uploading video directly to an FTP is more interesting. Of course, the dimensions of the XA25 are a consideration, and at a length/height of about 9-inches and 7-inches, including the mic, Canon kept it compact. The extensive features rolled into one solid camera from an exceptional line of cameras are sure to deliver for $3,000.

These eleven products have the potential to make your production more professional and that’s really the bottom line of why you’d look into getting new gear. Does it help you work faster, smarter or even make you appear more capable? Each of these products can be a great addition to your set of video tools. Learning how to use them is another story.