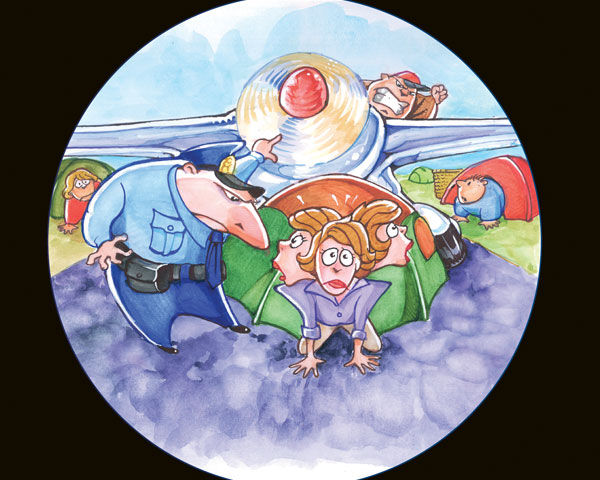 We know everything hasn’t gone smoothly on EVERY shoot – how can it? Combine a huge amount of gear that would stagger a pack-mule with an assortment of conditions, clients, climate and conundrums – and calamities will happen… and they do.

The time has come to spill… and share with the world our video oops and goofs for our annual Videomaker Horror Stories. These are real horror stories from videographers shooting in all levels of the business, and this year I took my appeal to the trenches and solicited stories from the writers you read every month in the annals of Videomaker. Next time you see these names, remember the stories of how they fell from grace for a moment or two, and how they picked themselves up, (sometimes literally), dusted their camera off and continued to shoot, edit and produce video, because, after all, it’s the greatest gig of all!

As tradition, I will start with a story of my own, so settle in and get comfy while we entertain you with more Video Horror Stories from the Deep.

This story comes from my early days as a TV news shooter for a mid-market station. My reporter and I were given one of the coolest assignments on earth: tag along with a hot-air balloon crew as they fly in the Dawn Patrol event at an annual air show. 100 balloons would launch right before dawn, and the images of all these colorful balloons – lit only by the fire stoking their lift-off in the morning dark – was going to be awesome. The event was at a small airport out of town, and we’d have to get up at 4:00 a.m., so we left right after the 11:00 p.m. newscast the night before to camp alongside the balloonists and their crews.

We approached the dark airport ’round midnight and could just make out the silhouettes of long deep rows of tents as the balloonists slept. “There’s a good spot,” I said as I could barely make out an area in the dark with no other tents around it. We packed our gear to the site and using only a small pen-light for illumination, we set up our tiny tent then settled in to sleep.

About an hour later we were awakened by a loud roar overhead, and the brightest light I’d ever seen flashed across our tent and was gone. Moments later, we heard squealing brakes and our tent was again lit up, this time by car headlights. “Hey! Who the (expletive) gave you permission to camp on the tarmac?!?”, a voice shouted from the dark. We popped our heads out of the tent and there, looking back at us, was the head of airport security, the coordinator of the balloon event, and a dozen balloonists peeping from their own tents – all in a state of surprise. Apparently that “good spot” was in the middle of the runway for incoming planes and that roar and bright light earlier was a plane that had to make an emergency diversion maneuver to keep from landing on top of us when the pilot spotted our little tent. Needless to say, we were the butt of the joke the rest of that event, but I still did get some killer shots of the Dawn Patrol.

My first big job I worked on was as a still photographer on a documentary shot in the Australian Outback. Teams of one photographer and one videographer were sent ‘into the bush’ to shoot. At the end of a ten-day slog in blazing heat and deadly critters, my partner and I luckily caught a ride back to camp. Ten days sleeping in the bush made us really dirty. The truck had a full canvas cover so we were protected from the sun. There were others riding along, so we sat at the end of the truck. The rear canvas flap could close to keep out the thick dust, but if down, we had a three hour ride in a hot box with no circulation. Up, at least there would be air. We chose ‘flap up’ and clouds of dust poured into the back of the truck!

For three hours we endured the mini ‘dust storm’ – at least it was cool! When we arrived at camp, our producer waiting for the incoming teams saw us and the gear covered in dust. He was one who hardly ever cracked a smile but burst out laughing when I took my hat off. The top of my head was the only ‘clean’ spot on my entire body! After days of blowing dirt out of my nose (the videographer cried when she saw her tissues), I got the lesson of that experience. In production, there will be times you’ll have to decide whether to ride with the ‘flap up or down’.

We’ll Leave the Camera On For You

Early on in my career, I made a lot of mistakes. From leaving gear on location, to knocking over light stands mid-shoot, but perhaps my greatest mistake came on a beautifully sunny summer morning. I was packing up my gear to shoot a small town water skiing event in NW Minnesota. I packed all the essentials – extra tape, wireless lav with waterproof case, wide-angle lens and my trusty, indestructible, NEVER-LETS-ME-DOWN “brick” battery. I snapped the battery in place on my camera, loaded up and headed out.

Just under two hours later, I arrived on location to find that another local production crew was on site to cover the event. “The competition” I grumbled under my breath. Unbeknownst to me, one of my colleagues had replaced the camera without turning it off the night before… he just took the battery off and put the camera away without powering it down. When I put the battery on before leaving, I hadn’t thought to check to see if the power was on. Needless to say, my battery was zapped and I had no way of shooting the event.

Thankfully, when talking with the guy from “the competition”, he took pity on me and loaned me his spare battery. Lesson learned. To this day, I always make a point to a) check that the camera is powered down, b) never put my battery on before leaving the office and c) always treat the “competition” with respect – you never know when you might need to ask for help. And, oh yeah, a spare battery is always a good thing to have in your bag.

My horror story takes place in the country – a third world country. Like most third world countries power is a luxury and this was no exception. We were in a small village trying to interview the village chief who was very elderly and very fragile. So fragile that he wouldn’t leave his dark hut and that was the only place we could interview him. Now when I say hut, I mean this was a thatched-walled, dirt-floored, one-room house with only a three-foot wide hole as a door, with a flap covering the opening. Dark was an understatement. With no power for miles, no battery lights and no flashlight powerful enough to light more than his nose. We were stuck. I quickly asked one of the small children running about if anyone in the village had a mirror. They returned with not a hand held mirror but a broken shard of a mirror from the back of a vanity. It was perfect. I quickly grabbed a tree limb. Propping it up, I pointed the beam toward the sun and reflected the blast into the doorway of the hut. Once back inside the hut, I grabbed my flex fill reflector and bounced the soft white side into his face. Not only was the level good but I could also change the angle a little so as to show off all of his decorations he had in on his body and in his hut. Interview saved.

That changed in eight minutes. Cameras stay at hand. Other equipment, a bag full of money, projector, spare tape and batteries, and those precious ceremony tapes shot two hours earlier, were strapped to a cart and left next to the DJ booth while I retrieved my camera. My partner was shooting. That saved us.

Thieves got everything but the screen, two batteries, our cameras and my partner’s ceremony footage – the run-and-gun stuff. While I looked for thieves, checked dumpsters for discarded items, called the Sheriff’s department, spent time with an investigator and filed reports, my partner rolled tape.

Our couple handled the loss of montage projection well, but we thought all of the ceremony footage was lost. We found guests who shot tape we could borrow and with all of this, we were able to create a production that pleased the couple. We refunded the projection charges, did a new love story shoot, and they paid us after reviewing their video. They also tipped us big time.

No Friday night receipts, but I left the tapes in my car. The reunion committee identified the orders. We delivered on our dime, but received 20 extra orders. I found a projector and maxed out a credit card for Sunday’s events. Some Valium would have helped.

Everyone makes mistakes from time to time, and it’s hard not to when you are working with enough gear to sway that pack-mule, mixed with the amazing technology our brains have to absorb. But we make the magic happen – almost every time, and we get the shot – and no one else knows about the bruises, near-death moments or slipups we endured while getting our story to our audience. We hope these stories of terrifying mistakes, and the motivation to avoid them gave you a laugh or a gasp or two… ‘Til next year…

If you had fun reading these horror stories, read more from our readers at these links:

Videomaker Managing Editor Jennifer O’Rourke is an Emmy award-
winning videographer and video editor and will go up in a hot-air balloon again anytime she gets the chance (but is afraid of commercial airlines!).