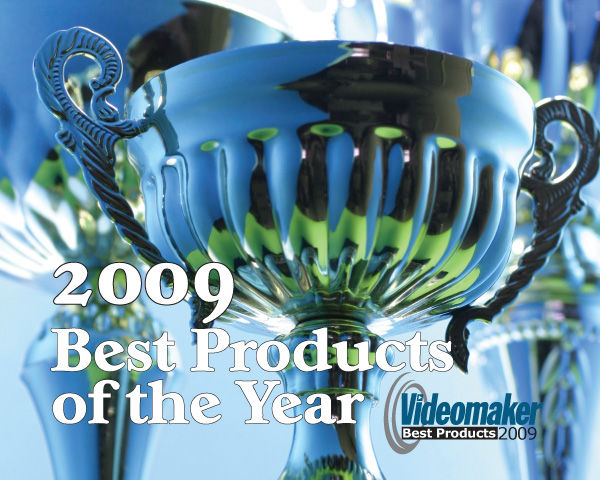 Every year, we take a few weeks to step back, take a look at our records and reflect on what products we’ve looked at over the course of the year. It’s a challenge, but it’s one that’s worth it, as we look at where the industry was and where it is going. Some products were difficult to judge. We saw a lot of new support gear that was created to help users shoot steadier video with the newer smaller camcorders. But each is so different, the “best” depends on the user’s needs. You’ll also see that we had no mics this year, mostly because we didn’t see many new mics come along. We suspect the manufacturers of wireless mics are waiting to see how the changes with the new FCC rules affect their use of commercial radio signals. For more on that read our blog, FCC Proposes Ban on Wireless Microphones in the 700MHz Spectrum.

The state of the technology for all video production gear is at an apex again. There are a lot of changes on the horizon, and the 2010 year looks to be full of promise. With that, here’s a look at the Best Products of the Year that passed through the doors of Videomaker headquarters in 2009. 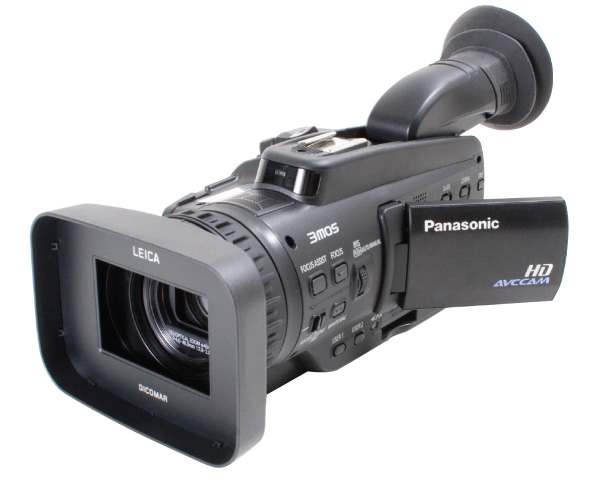 The Panasonic AG-HMC40 is a tremendous value for a can-do camcorder. It’s inexpensive for a professional camcorder, to the point where some news directors might even stock up on them to be used as expendable news gathering camcorders. It’s also expandable; while the AG-HMC40 ships with only an 1/8″ mic input, you can add a Panasonic XLR mic adaptor for $300. We also like that it uses inexpensive, standardized media. 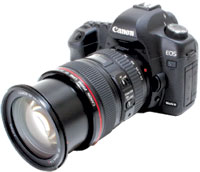 If you had asked us a few months ago whether we thought digital SLR (single-lens reflex) cameras would ever take video, we probably would’ve chortled out loud, then promptly apologized for being uncouth. But right around that time, Canon actually pulled it off – by updating the 5D with live preview, which also allowed Canon to add video capabilities to the 5D Mark II, which has proved to be very popular. Therefore, the Canon EOS Mark II is the first winner of the new category “Best DSLR That Takes Video.”

This was a hard choice, but the little touches pushed us over the edge on the Panasonic HDC-HS300. It’s a three-CMOS cam with optical image stabilization, also offering direct control over iris and gain settings (that’s a lot more useful than a simple exposure setting), and the AC brick doubles as a battery charger, so you don’t have to charge your batteries on the camcorder.

Take an already-great Flash camcorder, the HF S10. Double the internal Flash memory to 64GB and improve the image stabilization, and you have the HF S11. It’s a sweet little camcorder that is ready to record your life.

This was the only tape-based camcorder that we reviewed this year, but it was quite a good camcorder, filled with plenty of manual controls – and it shot magnificent video. Nonetheless, there were no other HDV camcorders entering the ring this year – it could very well be that this will be the last HDV camcorder released.

2009 was the first year that we looked at pocket camcorders, an emerging category that will probably become very popular over the course of the next year. The Sony MHS-PM1 stands out with a Memory Stick slot and a lower list price than most of its competitors. Not only that… it’s also available in different colors.

We saw a lot of cool computers over the year, but the Polywell was the standout. The system was hand-tuned for use with Adobe CS4, including such bleeding-edge enhancements as the NVIDIA Quadro CX video card, a Blu-ray Disc burner and Intel’s screaming-fast Core i7 processor.

The Omni-Tracker isn’t a dolly in the traditional sense, in that it doesn’t require a track. But it rolls as smoothly as any dolly can on any flat, smooth surface. It’s a unique camera support that is easier to use than many other moving supports.

Video Pro X is a step above the typical bargain-basement editor, but it is more accessible than the typical pro-level editing application. It seems to hit a sweet spot between the two product categories.

Hands-down, one of the coolest programs we’ve seen all year – what other program will take in your video clips and clean up everything that is problematic about them from camera shake to color variances? And it leverages the power of CUDA, if you’ve got an NVIDIA graphics card, to make the whole process go much faster. (But even if your computer is CUDA-impaired, the program still runs pretty fast, all in all.)

Sony Media Software’s Vegas Pro 9 is one of the first editing applications for Windows to explo it 64-bit hardware, which is clearly where we’re all going at this point anyway. There’s also support for 4K acquisition and editing, though it’ll take some time before we get to the point where 4K gets into our price range. And there’s also support for several newer formats, including XDCAM EX and RED ONE. For $600 including a version of DVD Architect that also burns Blu-ray Disc, it’s a deal.

CS4 came out at an unusual time last year – at the tail-end of our selection process for last year. Based on the strength and polish that we saw in release candidate versions, we gave CS4 the Best Product of the Year award last year, and after using the final version of CS4, we say there’s still not a full suite that competes – for one fairly reasonable price, you get all of the video tools that you could possibly need – video editing, audio editing, still image editing, compositing and DVD authoring.

A good disk array is lightning-quick, pretty quiet and protects your data. We saw all of these qualities in the EditBOX EB8MS. We enjoyed using this very fast drive – its RAID controller (provided by HighPoint) made the array very easy to enjoy.

If you have a camcorder that can be adapted to use a 35mm lens, the Redrock Micro M2 can act as the intermediary between your camcorder and a standard 35mm lens from an SLR. This is the easiest way (barring simply using a film-look filter in your editing software) to get that elusive “film look” for your video productions.

An extremely versatile kit, utilizing fluorescent and halogen lights, which includes pretty much everything you’ll need in a basic light kit.

The Intensity Pro bridges the gap between the past and the future in one slick little card. You can import composite, S-video and component video, and then turn around and import or export HDMI video from the latest spiffy camcorder du jour. Picture quality of captured video is excellent.

NVIDIA’s Quadro CX was one of the first video cards to seriously put general-purpose computing on graphics processing units (GPGPU) on the map. NVIDIA’s CUDA technology allows for quicker rendering of complex projects, shaves project render times and allows for more real-time video operations. Its successor products and competing products on the market (namely, ATI products including Stream technology) are driving down the pricing of this technology to the point where it will be completely mainstream before much longer.

This Mac-only music composition package takes a slightly different approach to creating your own movie score, but you still get control over every single aspect of your project’s audio.

As always, we want to look at next year’s outlook, and we are left wondering: What does the future hold for recording, transferring and storing video footage? You might notice we didn’t give an award to a DVD-based camcorder, because there were none issued this year. As quickly as that format came in, it went out. Cueing up a DVD camcorder for shooting had some latency that most users found annoying, causing them to miss those first few seconds of a shot. What else is gone? Well, VHS, of course; it’s been gone a long time, even though you can still buy blank VHS tapes in stores. Will mini-DV be the next format to go by the wayside? When it came along in the early 2000s, it received rave reviews. Many people still prefer it for archiving purposes, because where are we going to archive all that footage shot on SD cards? Our crystal ball sees more card storage applications coming in the next year, as media management becomes more crucial to keeping your precious memories around. Until next year, this is a quick survey of items that exemplify the state of the art at this moment. We are excited to see where we will be going from here.
– The Editors

For a product to qualify for an award, it must have passed through Videomaker headquarters in 2009, for examination by our editors. From there, we judged products based on the following seven criteria: