And the Winner is…

Over the course of a couple of months, we received hundreds of great entries for the 2006 Videomaker/Sony Short Video contest. This was a challenging year to pick winners-the entries just keep getting better and better every year. So let’s take a look at this year’s winners!

We have uploaded all of this year’s videos to our Web site for viewing at
www.videomaker.com/community/contest-winners/2006/. Be sure to check them out! 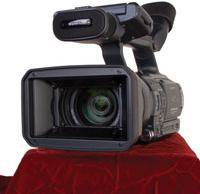 A convenience product of sorts for new parents (though we certainly hope it never makes it onto the shelves of your local ultra-mart), Baby Feeder delivers some honest laughs.

An elegantly simple commercial for a cable system’s public access channel shows that you don’t need a lot of ingredients to put together a compelling announcement that will get noticed.

A unique trailer for a traveling exhibit (www.alienearths.org) used kids from a local theater troupe for talent, and also includes some NASA assets.

Best Religious Video – A Song for the Wounded

A Song for the Wounded was shot at a local church, and utilized a chair to execute the dolly shots.

A departure from the usual cut-and-dried corporate video, Stewy’s Skate Park adds in some pop-up text to highlight certain features of the park. Approximately 4 hours of location shooting add to the video.

Another entry to Sanczel’s Pencilman series (He’s Got a Point was shown on the Take 20 segment of Videomaker Vidcast episode 18). This time our man in yellow has a lady friend…

Two opportunities came together for Loveness – a chance to use CGI along with the availability of a great location. Out of this comes this teaser trailer.

This short video was originally produced for dvinfo.net’s DV Challenge, a one-week contest.

A funny production complete with backwards effects (something he has been doing for some 30 years), Kersey shot video of himself for Side Effects. Additional rotoscoping was done in Photoshop.

A poignant look at an agency for abandoned children in China culminates with the implied adoption of a child by foster parents.

At the time of the production, Noel was a student at the Institute. His skill set has earned him a staff position at the Institute, where he now instructs food photography.

Best Sports Video – What Does It Take…To Be A Champion

Walrich is a coach who has produced this highlight video of one of his wrestlers. It’s appropriately fast-paced and utilizes a hard-hitting soundtrack.

This straightforward, but well-produced, music video was shot at Longview, in Washington State. Lopatin notes that the production van they used almost got stuck in the sand.

A dark video with a character becoming reflective over the course of being held hostage.

Danny Sayson, a previous contest winner for his popular Soo Jerky commercials, is back with a great wedding video synopsis.

Farrell skillfully targets his audience with a message of healthy eating they may not otherwise get, with U Gotta Choose. Learn more about it in our interview with Farrell on Videomaker Vidcast epsiode 55.

Strosin has fun with a custodian who makes the most out the situation after his personal audio device’s batteries die. You might recall Strosin’s winning entry from last year, Unplanned. Don’t miss our interview with Strosin, which appears on Videomaker Vidcast epsiode 54.

Hodges Usry is our next Short Video Contest alumni (last year’s entry: Sorry) who also won a prize this year. See more about Rozwell, which was based on a true story, on episode 53 of the Videomaker Vidcast.

nother dark entry that makes you wonder what you just saw, Perception takes First Place. We interviewed Jeffrey Tetler on episode 52 of the Videomaker Vidcast.

Our grand prize winner, Overkill, features a remarkable array of special effects and a keen sense of humor. Be sure to check out our interview with producer Jeff Petersen on episode 53 of the Videomaker Vidcast.

We have uploaded all of this year’s videos to our Web site for viewing at
www.videomaker.com/community/contest-winners/2006/. Be sure to check them out!