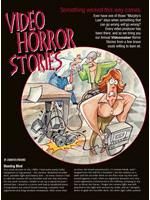 Something wicked this way comes.

Ever have one of those “Murphy’s Law” days when something that can go wrong will go wrong? Every video producer has been there, and so we bring you our Annual Videomaker Horror Stories from a few brave souls willing to bare all.

As a news shooter in the 1980s, I had some pretty hefty equipment to lug around – the camera, detached recorder deck, portable light and battery belt – so every chance I had to take the camera off my shoulder and rest was welcome. On one such occasion, unable to set up a tripod because I arrived late, I stood in a corner and had to handhold-shoot a long drawn-out school board meeting, complete with arguments and long-winded combatants. After more than an hour, the board announced a 15-minute break, and I stepped into the hall for a breather. I set the camera on a table and the recorder deck on the floor near my feet and leaned against a wall, when an argument between two very vocal opponents commenced in the hallway. Jumping to my feet to shoot the fracas, I forgot the camera light was still attached to the light-belt around my waist, and as I stooped down to grab the recorder deck, the short light cable yanked the camera to the floor, breaking the eyepiece beyond repair. The argument was still going on, so I hit Record on the camera, set the lens setting as wide as possible and, shooting blind, hoped for the best. Luckily for me, from years of shooting, I managed to gauge it correctly, most of the fight was in focus and in frame, and I had a good exclusive story for the lead story that night.

Who says school board meetings are dull?

Attack of the Killer Trumpet Player

Several years ago, our local university assembled a community choir and orchestra to perform Handel’s Messiah. The performance was taped by a local television station and aired on Christmas Eve. Being friends with the TV station and the theater manager, I was drafted to handle audio duties. Due to schedules, I was only able to attend the final dress rehearsal, where some of the key orchestra players were not available. The 200-voice choir was set up with the sopranos on the left, men in the center and the notoriously quiet altos on the right. The small orchestra sat in front of the choir. I used a microphone for each vocal section plus a few for the orchestra and solos. Rehearsal went fine and the performance went just as well until the Hallelujah Chorus. I had the alto microphone boosted to the max to balance them in the mix when the piccolo trumpet player (not present at rehearsal and seated directly below the alto mic) began his triple-forte run. Every meter on every output went into the red and the distortion at the recording deck was frightening. I made a quick correction, but the damage was done. It aired with the nasty distortion intact.

The Shoot Day From Hell

Back in 2005, I started work on my first feature-length film. We decided to shoot in HD and ordered a new camera, along with some audio and other support equipment. Unfortunately the gear was back-ordered and didn’t come in until the day before our first shoot day, so I had about 12 hours to charge batteries, set up wireless mics and learn a new camera from scratch. Our first location was a rural setting by a creek, which we’d booked weeks in advance. Upon arrival, we discovered a Boy Scout troop was camped out in the field by the creek. We worked around that, but then it started to rain. As we broke for lunch, it cleared up, and rained again after lunch. After about 6 hours of total frustration, 12 canoes showed up for a float trip beginning at our bridge location – complete with whooping, hollering and beer. Ultimately, we gave up, scrapped all the footage from the day and started again the next morning.

One cloudy afternoon, three youths gathered to make a home movie. Sounds easy enough, right? A camera, a couple of friends and a blockbuster epic that only young producers can create will commence. The home movie was about zombies, and the shoot location was a shed, where my brother, John Taylor, and my friend, Patrick Brown, and I meet. After careful pre-planning, I was filming as much as I could when all of a sudden, my battery died. (This is not even the bad part of my story.) I was mad, because that was the only battery I had for the camera, so we had to stop shooting for the day and place the props for the movie back in the shed. I placed the camera on the ground near the shed. Well, Patrick didn’t pay attention to where I had placed it, and he stepped on my camera and tripped over it. Although he was lying on the ground, I only had eyes for the camera. I lunged for it and checked it over, and at first, nothing looked bad, and I was relieved . But, then I saw that the record button broke off the camera. That upset me greatly, but I was still able to pop the button back in and use it. Now I have a new camera, and I am way more protective with it. For me, my brother John and my friend Patrick, though, that day will forever be known as “The Maryland Video Camera Massacre.”

I was recently in Shanghai, China, and a friend told me about a Chinese production company looking for a foreign editor. They had a client that wanted a two-and-a-half-minute promo piece that had a western feel. They liked my two-minute demo reel, especially the way I edited the material to the song, and they gave me the job. I spent many more hours than I expected getting the piece to a rough cut, and one of the bosses, after many, many other content changes, told me that it was a bit slow, that it needed some “spice.” She finally communicated that she wanted a larger variety of transitions. I teach editing, and I implore my students to use tricky transitions only if it fits the mood of the piece, if it moves the story forward by adding value to the overall message of the story. Granted, the short work was a montage music video-like piece, but I tried to explain that gratuitously adding random transitions would make it look “cheesy.” I tried to illustrate this by randomly dropping in the most gruesome transition I could think of, the star wipe (which I have seen used well consequently). She loved it, excitedly exclaiming, “Yes, more like that.” I’m glad my name is not attached to this piece that I was somewhat proud of at my first rough cut. The client got what she wanted, but it wasn’t a “western” montage.

Can You Hear Me Now?

Some 15 years ago, I ran the camcorder at a family wedding. We bought a cheapo wireless mic kit from a neighborhood electronics store a couple of days before, along with batteries and cables. Luckily (and fortuitously, as it turned out), the kit included an earbud for monitoring. We didn’t think to test the new mic beforehand, so when we got there, we were disappointed to hear no audio from the camcorder’s headphone jack whenever we attached the new mic. The resulting wedding had pretty decent video, but the audio was incredibly poor. Needless to say, this is one production that I didn’t put on my demo reel, but, at the time, everyone was reasonably happy with it.

Just starting out, I managed to book several events to shoot, while I continued to search for the right editing software to use. I was really excited and posted and listed the different events on my Web site in the Maryland and DC areas.

I was using a Sony camcorder I had bought back in late 90s, and I was hoping to eventually transport the tapes to DVD as I began my journalism/videography career. I had a lot of footage on the Mfume 2006 campaign, and special performances by new and upcoming artists.

The following months to come, my daughter and I ended up moving, and I packed all of my media stuff, tapes and software in one bin and carried that on the bus ride to NY. But… we had too many bags, and I didn’t double check our seat when I thought I had collected them all, and I left the bin with all the media on the bus. I was sick.
Since then, I have had several headaches for not having the opportunity to edit or produce any of my work.

Last year I volunteered to videotape my nephew’s wedding ceremony. Unfortunately, the night before the event, the car my wife and I were in was rear-ended on the way to the rehearsal dinner. Although I was pretty shook up, I proceeded with the taping the next day. I thought the taping was successful until I started breaking down the gear and noticed a rather large dust ball right on the lens of the camera. Sure enough, upon playing it back, I was terrified to see a large portion of the image obstructed by the foreign matter. Apparently I was still so in shock from the car accident that I didn’t notice. I consider myself to be an exacting amateur so I was stunned that I didn’t notice it during the ceremony… Oh, boy, what a mess. Unfortunately, to this day I don’t have a solution to correct the problem.

You Mean There’s an ON Switch?

I was asked to video a wedding. One of the items I needed and purchased to use at this wedding was a good shotgun microphone. I went online and got the Rode VideoMic and couldn’t wait to try it out. I already had another little shotgun mic for my carry-around camera but wanted a better quality one for my main camera. I had all the equipment set up and ready to go, ran my checks and then powered everything down to conserve batteries while I waited for the ceremony to begin. When I got the cue, I powered up and started rolling. It wasn’t until after the ceremony, when I went to shut everything down, that I noticed the Video-Mic was NOT TURNED ON!!! So, I got NO AUDIO on my main camera that was positioned behind the pastor and wedding party. My heart went right to the bottom of my stomach. I could feel the years advancing rapidly as I was packing away all the gear. It wasn’t until after I got home and started digitizing the footage that I discovered I got about 80% of good audio from my little shotgun mic on the carry-around camera. It took some strategic editing, but the end product survived and, fortunately, the bride was happy. Now I have lavaliers and mini-recorders along with the shotguns and a CHECKLIST I use for each and every event.

As our “Horror Story” entries indicate, even the seasoned pros have bad video days. Thank you to everyone who contributed and allowed us to air your oops, goofs and spoofs in our magazine. By sharing, we all learn, and have lots of stories to laugh at… later, after the pain and embarrassment have faded away

Videomaker Managing Editor Jennifer O’Rourke is an Emmy™ award-winning videographer and video editor who usually gets her shot, but not always!