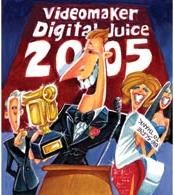 As in years past, some of our readers shared their video production talents with us. Our initial impression: wow. The quality of the video that we received this year absolutely blew us away. We had a difficult (but enjoyable) time picking out this year's winners. So without further ado, here are the winners of the 2005 Videomaker/Digital Juice Short Video Contest. 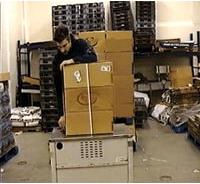 A bleak look at the life of a working stiff. If you've ever felt like your weeks go by faster and faster as you get busier and busier, you will definitely sympathize with Taylor's character in Working Nightmare.

A disadvantaged boy is pushed too far in this tragic video. Hodges filled all of the crew positions by himself over two days of shooting. He used local talent, including fourteen kids as extras on a school bus, and his own father played the father in this video.

This commercial was both shot and edited by Hartwell, who used his friends and family as talent. One zoom effect was facilitated with a remote lens control, and the audio was provided by a local audio producer. The :30 spot appeared on local cable in northern Michigan.

A tribute to the Donut Dollies, a corps of female Red Cross volunteers who served in Vietnam. The documentary consisted of many still images, which were touched up using Corel PhotoPaint. The project took about three full weeks of scanning, photo editing, video editing and compositing.

A well-executed training video that concisely illustrates the best way to set up lighting for theatrical productions. The use of picture-in-picture closeups clearly shows the procedures to use to get the lighting effects you need.

Unplanned is a tragic, cautionary tale of what happens when someone is too quick to judge what is really going on. The shooting took place over a day and a half.

A very funny story about hunting in the upper Midwest, complete with a Conan O'Brien-style superimposed mouth on Baby Max.

A native dance contest in the Pacific Islands is documented in this video.

SharpFocus XS is a clever parody on a drug commercial that features a guy in a gorilla suit. All of Hall's footage was acquired over the course of one-day shoot.

An abandoned train car is the backdrop for this story of lost love set to music.

A very well-produced video for the Toledo, Ohio-based band Spor included some interesting public domain footage from the Prelinger Archives.

Adair and Guthrie produced Speed as a school project. Shooting took 2½ days. Color correction was performed with Adobe After Effects, and the music was composed with Apple Soundtrack.

A Flash animation ports to video nicely in this samurai warrior fight with brilliant, saturated colors.

A smoothly-animated composition of high-resolution still images taken at a golf tournament comes together very well.

Grand Prizewinner Riley Harmon produced Carbon Nation's classroom full of identical children with some self-taught After Effects skills. The video was edited together over five days, and was shot in about eight hours.We also want to give recognition to Riley for Media Control PSA, a separate :30 spot that he submitted on the theme of being overloaded by the media.

Congratulations to all of our winners, and hats off to all of our entrants on a job well done. We are anxious to see what next year's videos will look like. Look for the next Call for Entries to appear in the July and August 2006 issues of Videomaker.