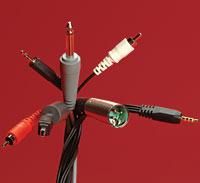 Last month we began a two-part series on connectivity with a look at video cables. This month, we’ll look at audio cables and connectors, since choosing the right audio connection can be just as important as your video signal path. The discussion below puts the choices in order from best to only so-so.

As we discovered last month, FireWire is the gold standard for high-quality desktop video connectivity. Not surprisingly, it’s also ideal for moving digital audio from tape to your editing system and then back again. Formally (and formerly) known as the IEEE-1394 protocol and marketed by Sony and other electronics companies as i.LINK, FireWire was invented in the mid-1990s by Apple Computer.

XLR cables and connectors are the top of the line for making analog audio connections. Also known as Cannon connectors, these devices provide a balanced transmission between high-end audio devices, like microphones and DAT decks, to ensure pristine audio reproduction without electronic interference.

RCA cables and connectors are found on televisions, VCRs, stereos and camcorders so they’ll allow you to connect almost anything to almost anything else. Though not nearly as robust as XLR, RCA connections clearly win in the convenience category.

Though less and less common in a world of FireWire and USB, 1/4″ phone connectors can still provide a robust signal path for some audio devices. These cables send a mono or stereo signal along a single path, making them a fine connectivity choice when other options aren’t available.

[Sidebar: The Long and Short of Cables]

Shorter cables are always better. Since all connecting cables, including FireWire, are subject to some degree of electrical and magnetic interference, it’s important to use the shortest cables you can; the longer the cable, the more the signal deteriorates and the more chances there are that your audio will pick up interference.

You may have seen devices on the market that let you capture analog audio via an interface box with a USB connection to your computer. It’s a great idea, since USB is economical and even more common than FireWire, but it’s not for everyone. All of these “breakout boxes” must perform their own analog-to-digital conversion and some devices are better at that than others.

[Sidebar: Are All Cables Made the Same?]

There are wide variations between cables made by different manufacturers and it’s undeniable that some are better than others. You’ll often see an emphasis placed on gold connectors; these can be helpful in avoiding corrosion at the contacts, but we’ve never seen a corroded cable in our living room. With thinner-gauge (20-gauge is thinner than 12-gauge) cables like RCA and 1/8″ mini, heavier construction can mean better sound and longer life-span. And whatever the connector, look for plenty of shielding – some manufacturers use almost none and it definitely makes a difference.

Many of us have used adapters and adaptor cables to get from one analog connector type to another. Adaptors can be lifesavers: they can help make the leap from, for example, the 1/8″ stereo mini audio out from your computer to the double RCAs on your VCR. But they can also cause problems. They add another potential source of interference and signal loss to your system.

Watch out: there are a few different voltage levels that might be used for analog audio connections. The higher voltage line level outputs can damage microphone level inputs, so make sure you check the type of connection before you power up. For example, camcorders typically have microphone (level) inputs while mixers often output a line level signal.