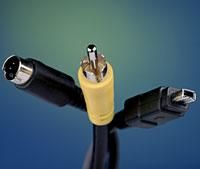 As video creators, we all know that finding a subject and getting it on tape are only the first steps in a long process. Back at the editing station, we still have to wrangle with an array of cables, connectors and communication standards to get from the raw material to your finished product.


In this article, the first in a two-part series, we’ll look at the most widely used video connectors and standards. The discussion below puts these in order from best to only so-so for video applications. In part two, we’ll focus on the audio side of the equation.

Are All Cables Made the Same?

There are wide variations between cables made by different manufacturers, and it’s undeniable that some are better than others. You’ll often see an emphasis placed on gold connectors; these can be helpful in avoiding corrosion at the contacts. (Still: How often have you ever seen corrosion on your cables?) Internal construction is also important. Look for an indication that wiring is of the appropriate gauge and resistance; analog video devices use 75 ohm impedance wire made for video transmission, not audio (that’s most important with RCA cables). And whether it’s an RCA or a FireWire cable, look for plenty of insulation – some manufacturers use almost none, and it makes a difference.

The Long and Short of It

Shorter cables are always better. Since all connecting cables, including FireWire, are subject to some degree of electrical and magnetic interference, it’s important to use the shortest cables you can; the longer the cable, the more the signal deteriorates and the more chances there are that your video will pick up interference. Using thicker, heavier cables will also help. Thicker cables are more heavily shielded than thin ones, protecting your video better from invading signals.

USB is a relatively slow data transfer protocol; it moves data at only 1.5 MB per second, as compared to FireWire’s maximum of 50 MB per second. Still, USB is universal on newer computers and can be used to transmit compressed video data (or any other kind of data, of course). Watch for more video applications to emerge with the faster USB 2 standard.

FireWire is the gold standard for low cost, high quality digital desktop video connectivity. Formally (and formerly) known as IEEE 1394, this communications protocol was invented in the mid-1990s by Apple Computer and is marketed by Sony as i.LINK. It’s ideal for getting video data from tape to your video-editing computer, and then back again.

Composite RCA connectors are everywhere; they are cheap, simple and widely compatible across a range of devices and manufacturers. Their video performance is only so-so, however.

One of the oldest kinds of video transmission, radio frequency (RF) video transmits analog signals in the high frequency range of broadcast television. It’s inherently lossy and prone to degradation and interference, making it useful only as a last resort. Analog RF signals should not be confused with a high-quality digital connection.