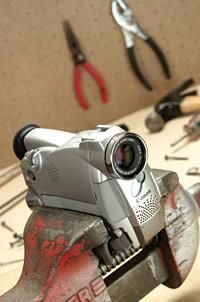 WARNING! Don’t Try This at Home!

circumstances. Doing so will certainly void your warranty, and may cause permanent damage to

the digital camcorder or personal harm to you. We recommend that you always have your video camera

repaired by a trained professional.

Dooley may be a little crusty, but he’s the kind of guy you can trust with your digital camcorder.

So when mine broke, he was the man to fix it. This was the perfect chance to learn the

inside story about this amazing piece of technology, from the moment the light hits the lens

to the final TV output.

"There’s a lot of technology crammed into this little thing," said Dooley, who

actually seemed to glow when he talked tech. "It has lenses, motors, gyros,

microphones, a clock, a tape deck, a computer and a TV. Not to mention a dozen input and

output jacks. It’s a robot-operated entertainment center in the palm of your hand. So, how

did you break it?” he asked.

"I didn’t break it; it just stopped working," I said, somewhat defensively.

your baby. Now hand me that tool kit.”

remote control. In a few seconds he had the back off the camcorder and was pulling its guts

"Here’s where it all starts," he said, holding up my precious zoom lens.

"The lens is one of the most important, and expensive, parts of the camcorder. No

amount of electronic wizardry can make up for a crummy lens.”

He pointed at two small gray cylinders alongside the lenses. "See these? These are

little motors to control the autofocus and the zoom," he said. "Essentially, this

is a sophisticated robot eye that responds to what the digital camcorder brain tells it to do. Yours

has an optical stabilizer built into the lens; a squishy prism that uses a tiny gyroscope to

"What’s that?" I asked, pointing to a chip the size of a postage stamp on a

Shaking Hands with My CCD

"That’s the CCD," he said, "a chip that converts light to electricity.

These things have been around for almost 25 years, but they keep getting better. It’s a grid

resolution. The more light that hits a photo-site, the greater the voltage output.”

"But won’t that just give you black and white? How do they see in color?" I

"Well, there are basically two ways, but they both work by splitting the light into

red, green and blue," Dooley said. "One technique uses prisms to split up the

light and send it to three different CCDs. That’s hot stuff, but expensive and bulky. Your

camcorder just has one CCD, and it puts different-colored filters over the pixels," he

said, handing me a diagram of a colored grid (see Figure 1).

"But this thing is mostly green," I replied. "Won’t everyone come out looking

"Actually, the eye sees better in the green part of the spectrum, so that grid works

great. But if you think about it, this technique cuts into your resolution. You need to

out, but the more pixels you can get in your CCD, the better your final resolution.

million pixels). You could shoot HDTV with that kind of resolution."

"Save your money, bud," Dooley growled. "Most megapixel CCDs are just for

TV, pixel by pixel, row after row. The output creates a varying voltage that travels through

an analog-to-digital converter. Can you guess what that does?”

"Converts analog to digital?" I asked with a smirk.

"You’re smarter than you look, pal. That digital signal gets stored in what they

call a memory buffer, which is really just like computer RAM," Dooley said. "Once

you have it in the buffer, you can use all kinds of software tricks on it. Some camcorders

even throw in digital special effects, but I see yours doesn’t.”

"Naw, I like to do my effects on the computer," I said.

"Your camcorder uses optical stabilization, but some camcorders also use this buffer

to stabilize the image," he said. "The software finds a feature and tries to keep

it nailed down. If the camera shakes, the software electronically moves the image in the

opposite direction to cancel the motion. That uses up some pixels around the border though,

which dings your resolution a bit. The image is also used to determine exposure. There are

at least two ways to do that. One electronically changes the amount of time that the CCD is

allowed to gather light. The other way is to control a physical iris with another tiny

"Your camcorder also uses this digital image to focus," he continued. "It

has software that checks on the contrast of the image and controls the focusing motors. As

starts to go down, it knows it just passed the sweet spot, and it backs up a notch for

perfect focus. There are other focusing methods; the most common uses an infrared beam. It

distance from that. It works just fine, but other infrared sources can fool it, like candles

"Finally," he went on to say, "another software program compresses the

image by a factor of five before it gets saved to tape.”

Dooley reached into the digital camcorder and pulled out the tape deck. I fervently hoped he

knew how to put that thing back.

"That brings us to the tape deck part of the digital camcorder," he said. "Here,

tiny write heads spinning at high speeds lay down the digitized image track, along with the

captured audio. The heads are little electromagnets, and as the pixels are read out of the

buffer, the signal magnetizes the tape.

"That’s really the end of the digital camcorder story," Dooley said, "except for

how you get the video out again. For that, you need to read the tape back. This is just like

the write process in reverse. The tape goes by the read head and every little magnetic spot

on the tape converts back into bits of data. This is digital data, which is very robust

stuff. Since a bit of data is binary – on or off – it’s difficult to swamp it with noise. Even

if noise does manage to destroy a bit, there are extra bits reserved for error-correction,

which means that you can count on a reliable, 100-percent perfect recording and playback. It

is this fact that makes digital so remarkable. No matter how many times you copy it, there

is no generation loss with digital like there is with analog video.

"On the way out, the video image is again stored in the buffer. Now, you can run it

into a computer with a FireWire connection and edit it if you want. But if you just want to

display it on a TV, you need to convert the digital image back to analog, the only thing a

typical TV can handle. What do you suppose they use for that, my friend?"

"A digital to analog converter?" I proposed.

"Right again, genius. That same circuit can also send a signal to the LCD viewfinder

on your camcorder. It’s interesting that although both CCDs and LCDs come from the computer

world, they are both usually wired for analog inputs and outputs. So, your digital camcorder

is really a hybrid, with a lot of conversion going on between the whole analog and digital

"Pretty soon, you can expect a fully digital signal path, which will give even

better results. In the end, you’ll still need to convert to analog for standard viewing, but

soon, even the televisions will be digital."

Dooley surveyed the entrails of my camcorder strewn across the table.

"Well, that about sums it up," he said. "Except for one thing. Your

camcorder has something you don’t see very often.”

Dooley held up the tape unit. "This thing seems to have a toaster in it. Or at least

someone must have thought so. Otherwise, why would there be a piece of bread in the cassette

"You should keep your kids away from this thing, Anderson. Hand me the

squished into the shape of a DV tape. "It should work a whole lot better now," he

Lens Quality: This is the most important part of your camcorder and usually the most

expensive. It doesn’t matter how many lines of resolution you have if the image is out of

focus. Premium optical coatings do a better job of preventing color fringing and

Zoom: An important aspect of a lens is its zoom capacity. Modern optics are

computer-designed and incredibly complex. Keep in mind that big zoom ranges may sacrifice

optical quality and speed, and long zoom settings will require a tripod or an image

Stabilizer: Optical stabilizers let you use those zoom settings to the max, and they

Speed: Faster lenses capture more light, so you can take shorter exposures. This is

We tend to concentrate on the video parts of a digital camcorder, but the audio is just as

important. Fortunately, audio is much easier and cheaper to deal with. Audio data is just a

fraction of the size of the video data.

It’s difficult to put a high-quality microphone on such a small object. Nevertheless, digital

camcorder makers have done a decent job within a tight budget and even tighter spaces. If

you’re looking for better quality, look for an input jack for an external microphone. Then

you can hook up whatever you want, including remote mikes.

There are two things to look for in a CCD: the resolution and the sensitivity. The

resolution depends mostly on how many pixels the CCD has, but is reduced somewhat if

electronic image stabilizing is used. The more CCD chips you have, the better. For

sensitivity, choose a low-lux CCD that can see well even in low light conditions.