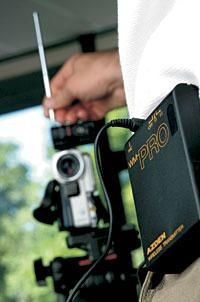 There are a few different types of wireless microphone system setups. They all require three separate parts to make them all work as one: a microphone, a radio transmitter and a radio receiver.

Some wireless systems have hand-held microphones with built-in transmitters. Others use lavalier microphones with small transmitter packs strapped to a person’s belt. These are very popular and provide a discrete method of miking a subject. It is important to note that a moderately priced wireless microphone often won’t have the same frequency response range as a moderately priced wired microphone. Some of the frequency range is sacrificed in the transmission from transmitter to receiver. This signal loss may not be noticed when miking a person speaking, however, because the human voice falls in the middle of the frequency range.

Wireless microphone systems operate in two different radio frequency ranges. These acronyms, also used in TV, will probably seem familiar. The FCC licenses wireless mikes to operate between 150 to 216 MHz in the VHF (Very High Frequency) spectrum. It also licenses operation between 400 and 470 MHz and again between 900 and 950 MHz in the UHF (Ultra High Frequency) spectrum. Much lower frequency, and usually much cheaper, mikes, operate between 41 and 49 MHz where they are subject to interference from all kinds of other devices.

Your Own Tiny Radio Station

A wireless microphone system’s transmitter pack is essentially a tiny radio station. The mike attaches to a tiny transmitter, which has a tiny antenna and a tiny power supply (in the form of a battery). This usually means tiny signal strength too, which is why your signal won’t stretch across town like a high-powered radio signal. Instead of calculating your range in miles, the range of the tiny radio station within your wireless mike is measured in feet. And it’s usually less than a few hundred feet for VHF and less than 1,000 feet for UHF.

On the other end of this cozy little microphone system is the receiver. It works much like a car radio, except it only tunes into the channels that your transmitter uses. For most videographers, wireless systems that use small battery-powered receivers are often favored over larger table-top systems that cannot attach to a camcorder.

Breaking Up is Easy to Do

Using a wireless microphone system presents some potential dangers. On a densely-populated shoot, where several other videographers are using wireless mikes, you may encounter interference with another mike operating on the same radio frequency. With more and more radio devices in use, it’s more and more likely for that to happen. Most wireless systems, however, offer a few different channels to work with, so hopefully you’ll notice that type of interference before you roll tape.

The next type of interference, multipath interference, is an inherent flaw of using radio frequencies (especially indoors), and often requires wireless microphone manufacturers to double-up on the electronics in a system.

What’s diversity to a wireless microphone? Well, there are two answers, and both are aimed at eliminating the effects of multipath interference. One however, does the job better than the other. Here’s how they work.

A true diversity system has two antennas, each leading to a separate receiver. A kind of switcher monitors these two for signal strength and makes sure the strongest of the two is sent out to the recorder on a moment-by-moment basis. A good diversity system does this quickly and seamlessly, introducing no static or switching noise into the signal.

On the other hand, we have "ersatz" diversity mikes. From the outside these look like the true variety, because their receivers also have two antennas. The difference, however, lies within. If you cracked the case of one open, instead of finding two receivers and a switcher, you’d find that both antenna wires lead to the same receiver. The single receiver receives the signals from both antennas all the time.

However the single receiver type of system is not as effective as the true diversity type at eliminating the effects of multipath interference.

The last thing you should understand about a wireless microphone system is the receiver’s output. There are three types of outpus: mike level, consumer line level and professional line level.

Small, portable systems that attach onto your camcorder and plug into its microphone jack use mike-level outputs. The output of consumer line-level units, however, measures -10dB and the output of professional line-level receivers measures +4dB. Be sure to add the correct attenuation and adaptation to either of the latter before trying to plug the output into your camcorder’s microphone jack.

Consider a wireless system that has mike-level inputs that you can strap onto your camcorder and go to town. You may consider a more expensive wireless microphone system, designed with musicians in mind. But you may also need a soundboard to use one of these to best results. No matter what type of video you make, understanding how wireless mikes work will help you be a better shopper and ultimately a better video producer.