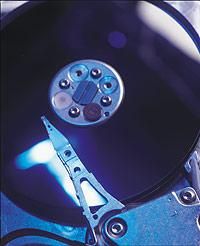 A few years ago, editing (even playing) video on a computer required a fast and expensive hard drive. You had to spend a lot of money and had to be very careful to buy one of the few hard drives on the market that could meet the then rigorous demands of digital video. But things have changed since then. Today you can use any of a number of hard drives on the market for video editing. But that doesn’t mean that every hard drive out there will do the trick. Video editors need to know a few basics to be able to select the right hard drive for the job.

Q How are hard drives related to video editing? How big of a hard drive do I need to have for video?

A Hard drives are essentially storage bins. The larger the drive, the more video it can hold. Because video requires large amounts of data, you’ll want the largest drive you can afford. Hard drive storage capacity is measured in Gigabytes (GB). Get a drive that is at least 9GB large or else you’ll be hurting for space when you start digitizing more than a few minutes of video. A 9GB drive will hold approximately 64 minutes of video at medium quality. That equates to just over seven minutes per gig of storage. Remember that a thirty-minute video may require well over an hour of raw footage and each time you render a new version of your project, you use up space on your hard drive. Get the biggest drive you can afford, and upgrade as necessary.

Q What’s the difference between spindle speed and burst transfer rate, and how do these specs apply to video editing?

A Hard drive manufacturers will throw an array of specifications your way, each trying to tout their drives as the fastest and most cost-efficient on the market. As a video editor, the specs that matter the most to you are capacity and sustained transfer rate.

If you are using a system that doesn’t compress the video (such as a Video ToasterNT), then the sustained transfer rate that your editing system’s drives must maintain is even higher. Check the minimum system requirements of the card you are using to be sure.

The next most important specification is the rotational speed of the hard drive’s platters or spindles. Companies usually list this as revolutions per minute (rpm). For the most part, drives that spin at 5,400rpm are too slow for video (and have the slower sustained transfer rates to prove it). Drives that spin at 7,200rpm work fine for most consumer-level editing needs, and professional-level systems require drives that spin at 10,000rpm or faster.

Finally, manufacturers will tout the seek time of their hard drives. They measure this spec in milliseconds (ms). The average measurement is between 5ms and 9ms for most video-capable drives. This number is a little misleading though, because with video you are usually writing large blocks of data together and the drive won’t need to find info from all parts of the disc. Editors should consider sustained transfer rate for speed, and size for overall capacity.

A The acronyms that describe hard drive interfaces sound scarier than they really are. USB (Universal Serial Bus) is a standard designed more for mice and scanners than hard drives. But some manufacturers decided that since the connection is so easy to use, consumers could use USB hard drives too. Video editors should avoid these drives like the plague. USB drives are too slow for video, so knock those off the list at once.

Next, there are FireWire drives. These are really IDE drives put into a special external boxes that translate the IDE interface into the video-friendly FireWire (IEEE 1394 or i.LINK) interface. These drives are usually substantially more expensive than their SCSI and IDE counterparts. Consider them for archiving completed projects or for an editing system on a laptop computer (because these drives are small and portable). For the additional cost, however, they are not significantly faster than SCSI drives.

Now come the real workhorses of the hard drive interfacesIDE and SCSI. When we talk about IDE drives we are talking about ATA/66 or ATA/33 drives. These latest versions of the IDE interface have overcome the slow transfer rates formerly attributed to IDE drives. The main limitation of ATA/33 and ATA/66 drives is the fact that you can have only four IDE devices on your standard computer. This is limiting when you consider that you’ll probably have a CD-ROM drive, and a hard drive from which you run your operating system and your computer programs. This only leaves you with two empty slots to in which to put video capture drives and/or a CD-R drive. If you plan to add more hard drives in the future, IDE may not be the best choice. However, your average ATA/66 drive will go toe-to-toe with a more expensive SCSI drive in the performance category, while costing several hundred dollars less for a comparative size. SCSI makes up for this with its trump card: the ability to add numerous drives to your system.

SCSI (Small Computer Serial Interface) is the old standard for high performance hard drives. It used to be that SCSI drives seriously outperformed IDE drives in transfer rate, and the amount of processor cycles on the computer’s CPU that were required to manage the task of writing data to the hard drive. With the newer ATA/33 and ATA/66 IDE drives though, the main advantage of the SCSI drives is the ability to add a large number of drives onto your system. If you use an editing system that requires multiple drives for video and audio capture, and separate system drives for the OS, editing software and a CD-ROM, you’ll probably find yourself with a SCSI-equipped system. While IDE is limited to two drives per channel (and all computer systems usually come with two IDE channels for four total drives), even the oldest version of SCSI can handle six drives. Later versions can handle eight, 16 or more.

Lastly, there are serious high-performance drive interfaces like Fiber Channel. These are very expensive, usually used only in high-dollar servers, and probably won’t find their way onto your editing bay for years to come (if ever).


Q What’s a RAID, and when should I consider getting one?

A RAID stands for Redundant Array of Independent Discs in geekspeak. What that means in English is that a bunch of small discs are used as though they were one big disc. RAIDs usually come with an internal controller card, and an external unit that actually houses the hard drives.

RAIDs come in different flavors. Techies like to identify them as "levels". They range from RAID level 0 to RAID level 6. RAID levels 1 through 6 use a bank of hard drives to make sure that data is safe. With a RAID, you can have one hard drive can crash and not lose any data. This is good for businesses who need to protect their files, but useless for video. When video editors talk about RAIDs, they always mean RAID level 0.

While the other levels of RAID are concerned with protecting data, RAID level 0 uses the discs to write data faster than a single disc. For example, if you have a RAID array with four individual hard drives (each of the four hard drives has to be identical in type), the RAID controller (a simple processor that keeps track of where it’s putting the data on the discs, freeing up the computer’s CPU from the task) will separate the data and write it to all four discs simultaneously. It’s like having a drive that is nearly four times faster than the individual drives that make up the RAID.

RAID systems used to be very expensive and exclusively in the realm of SCSI drives. However, in the last few years some manufacturers have produced low cost IDE RAID arrays that provide a lot of performance.

Users on the Windows NT and Windows ME operating systems can have the OS turn the computer’s hard drives into a software-run RAID array. This process uses cycles from the CPU, and is not as well regarded as a RAID that runs off a separate controller card.

If you edit video with a computer, you need to get know hard drives. The playing field for hard drives has leveled a lot in the past few years, with lower-priced drives catching up to the higher-priced ones in performance.

In the end, the bigger and faster the drive, the better it will serve the video editor. Fortunately, big, fast hard drives are cheaper than ever.