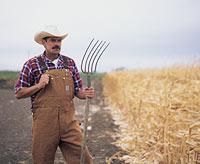 Why is it that everything is in focus when I look at a scene, but not when I shoot it with my camcorder? The answer, at least as far as your camcorder is concerned, is a property of your lens called depth of field.
Depth of field refers to that portion of your imagemeasured in distance from your camerathat is acceptably sharp. Most lenses do not render everything in front of them in sharp focus; only a portion of the scene will be sharp. For instance, if you are focused at, say 30 feet, you may find that objects in the scene between 20 and 50 feet from the lens are in focus; and everything else is out of focus. The depth of field in that situation would be from 20 to 50 feet from the lens. You will notice that the depth of field is greater beyond the point of focus than it is in front of it, usually by a ratio of about 2:1. You can use depth of field to your creative advantage. For scenics and other broad vistas you will usually want everything in the scene to be in sharp focus. Think of a long shot in a classic Western. At other times you may want to push irrelevant or unimportant elements of the background (or foreground) out of focus to draw attention to your main subject. You don’t want your viewers’ eyes to wander all over the frame at a dramatic moment. Conversely, if you have several subjects in a shot, you need to be aware of your depth in order to arrange them so that they’re all in focus. A powerful technique for leading your audience is to shift the focus at a dramatic moment. This effect relies entirely on manipulating the depth of field.

Depth of field is affected by a number of factors: aperture, focal length and point of focus. Thus it can vary from shot to shot. If you are shooting with your lens set at a wide angle on a bright, sunny day your depth of field may be almost infinite. If you are using an extreme telephoto setting in dim light, your depth of field will be very shallow. You should be able to get a sense of what is in focus by examining the image in your viewfinder; and if you can feed the camera to a good-sized monitor you’ll be able to see it even better.
By making yourself aware of depth of field and learning how to use and control it, you add another creative tool to your kit.

How to Control Depth of Field

Focal length, point of focus and aperture (or f/stop) interact to produce a particular depth of field; change any of them and you change the depth for that shot.

The Most Critical Factor

Trying to get an appropriate depth of field may sometimes be tricky. I recall a struggle we once had in trying to film a chemistry experiment. In that situation, our field size, i.e. the amount of the world we wanted to show, was strictly fixed. We needed to show the entire experiment, no more, no less.
When we set up the shot, we found that the depth of field was insufficient. We soon learned that if we pulled the camera farther away, we got more depth of field, but then we had to zoom in to get the correct field size, which lost us the depth we had gained. If we moved in we gained from the shorter focal length but lost from the closer point of focus. As long as we kept the field size the same, we got the same depth of field regardless of where we positioned the camera.
The only thing left to change was the aperture. To solve the problem we had to pour in some more light so that we could shoot with a smaller aperture setting.
From this we learned two things. 1) Modifying the aperture by controlling the light (or the shutter speed, is the easiest way to change the depth of field. 2) Under any circumstances, if you need to adjust your depth of field, it is best if you can change only one factor to do it.