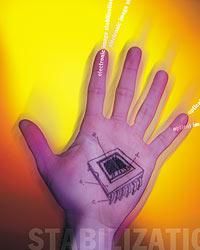 Most new camcorders have some sort of image stabilization, either electronic or optical. Image stabilization, as its name implies, helps to stabilize the image and reduce shaky video. While all of us find this a useful tool, most video producers don’t understand how it works. Right beneath your nose, or at least right in front of it, there’s a small miracle going on. Read on and you’ll learn just how this miraculous technology works.

While MTV and The Blair Witch Project have made jerky shots popular, for the most part you’ll want to avoid them. After all, shaky shots tend to make videos look amateurish. But some shaky shots are hard to avoid. No matter how steady you hold your camera, you still might get some vibration into the camera body, which can add unwanted movement to your image.

Imagine that you are shooting some footage of your family on vacation. The kids are having fun playing and you want to get some shots of them without being too obtrusive with the camcorder. So you’re forced to zoom in a bit to get more intimate with the moment. The only trouble is that the slightest movement of your camera is magnified proportionally with the act of zooming in on the image you’re trying to capture.

This is where an image stabilization system comes to the rescue. Armed with either an optical/mechanical system or a digital/electronic system, your camcorder smoothes out those jerky movements so you end up with smooth video of your loved ones.

The other more common and less expensive way of stabilizing images in video is through electronic image stabilization (EIS). With EIS, the goal is the same as in OIS-equipped camcorders to simulate a steady image by manipulation, but the means are different. Rather than adjusting the image by physically moving the lens and bending light before it reaches the CCD, EIS systems work by adjusting the image electronically, after it has reached the CCD, essentially reducing the pixels in the viewable area of the image.

Suppose a Mini DV camcorder has 460,000 pixels in its recorded image, for example. When EIS is engaged it will still be recording that original pixel count but the viewable area will be reduced. The pixels will be expanded in the view area to allow the remaining pixels to be used as a buffer zone. This buffer zone is what EIS uses to manipulate the sampled data to stabilize the recorded image. (

Image stabilization systems have forever changed how most of us shoot video. Although image stabilization systems aren’t meant as substitutes for tripods, lugging around heavy tripods every time you want to shoot video is no longer as necessary as before. Smooth video has become much more attainable, eliminating hurky-jerky video and that awful motion sickness. So the next time you’re shooting, turn on your image stabilizer, your audience will thank you for it.