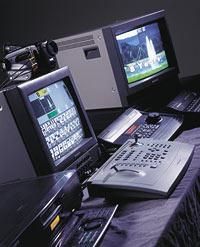 Imagine sitting in a small, family restaurant in the heart of Italy. You pick up the menu and see an array of words that make no sense to you. Your waiter comes by and patiently tries to help you but to no avail. No one understands you and your vain attempts to express yourself fail miserably. It’s all a matter of communication.
Well, linear editing systems rely on communication in much the same way we do. Each system uses a distinctive language, called an editing protocol, that enables it to talk between its editing decks and its edit controller. If the editing decks or camcorders speak a different language than the edit controller does, they won’t be able to understand one another and you will become incredibly frustrated.
The names of the various editing protocols are reminiscent of a confusing alphabet soup: RS-422, RS-232, Control-S, Control-L, Control-M, IR and the most recent addition to the alphabet, IEEE 1394. If you’ve ever tried to edit on a system made up of equipment from different manufacturers, you can understand the frustration. It’s like trying to talk to someone from Mexico, France and Russia all at the same time. To avoid this, it’s important to understand what editing protocols do, the various levels of sophistication and how to get a camcorder or editing deck to communicate to a foreign edit controller.

Editing protocols are nothing more than a means by which a piece of equipment sends and receives data (time code, in/out points) and various commands (record/stop/play) to and from other equipment. Camcorders and edit decks need a specific editing protocol to "talk" to edit controllers, switchers and titlers. These pieces of equipment need to be able to tell each other when to pause, rewind, fast forward and record. Prerolling tapes is a great example of how these machines talk to each other by means of an editing protocol.
After you’ve set your edit points and you’re ready to edit, the edit controller uses an editing protocol to tell the decks to rewind the tape five seconds before your in point. It then rolls the tape forward to the edit. If you have to do this manually, it’s a real pain and not too accurate. With an edit controller, you can set up a series of commands for the editing system to execute. The edit controller then stores these functions in its memory. Taking advantage of an edit controller, you can:

As we listed already, there are many edit protocols with confusing names. Each has its own level of sophistication, editing language, connector and connection style and accuracy limitations. Very few of them are compatible. As you read this article, keep in mind your budget, production requirements in terms of accuracy and format and current equipment.

The infrared remote protocol, or IR for short, is the least sophisticated of the true edit protocols. You actually use an IR protocol every time you change channels on your TV using an infrared remote. Like the TV remote at home, this protocol provides only one-way communication (see Figure 1). The infrared emitter sends a signal to your editing deck or camcorder and tells it to fast forward, rewind, pause, change audio modes between linear and Hi-fi, reset the counter, stop and eject the tape. No information goes back to the infrared device, so it has no idea if the command is accepted or how far the VCR has shuttled the tape. You’re responsible for that part of the communication. The infrared remote protocol, because it communicates only one way, can’t read your tape’s time code or control pulses, either, so your edits with this type of protocol are very "loose" or imprecise.
This type of editing protocol also requires you to precisely position the infrared emitter so that the equipment you are trying to control can pick up the signal (see Figure 2). If you move the IR controller out of position, you won’t be able to send the edit commands to the devices.

Sony Corporation saw the distinct disadvantages of the infrared remote protocol and decided to improve it. Sony created the wired, Control-S protocol. This protocol is similar to the IR protocol in that it is one way, but you don’t have to worry about precisely placing your IR emitter to transmit the signal. Sony felt that a wired system would give the consumer more flexibility. Unfortunately, unlike the IR remote, which can be used by a wide range of equipment, only a few Sony edit controllers and editing decks use the Control-S protocol. This restricts its use to a small list of equipment and makes it incompatible with the rest of the market. Because of this incompatibility issue, Sony later abandoned Control-S in favor of another one of its protocols, Control-L.

Control-L (also known as LANC) is Sony’s first two-way editing protocol designed to work with both 8mm and Hi8 devices. This protocol, because it is two-way, can tell the edit controller the status of the tape, including its location, whether it’s playing or if it’s paused, stopped or ejected (see Figure 3). If the decks or camcorder support time code, the Control-L protocol is also capable of reporting precise time information. Using time code and its built-in efficiency, this protocol is accurate and its one of the best consumer protocols on the market. A system with time-code capability and that uses Control-L, is accurate within a few frames.
When Control-L was first introduced by Sony, it used a 5-pin connector and it was supported only by members of the 8mm family. Now, the Control-L protocol uses a stereo 3-pin connector, which a number of Sony VHS and S-VHS VCRs, as well as several JVC camcorders use. Most edit controllers, whether stand alone or computer based, now support Control-L.

When Panasonic saw the success of the Control-L protocol, it decided to weigh in with one of its own. The Control-M or Panasonic 5-pin uses a special 5-pin connector that handles most of the same duties of the Control-L protocol. This two-way system sends equipment status information to the edit controller and allows all of the same functions as the Control-L protocol with the exception of one major function: internal time code. This reduces the editing accuracy.
Like the Sony system, this protocol is proprietary and is only supported by Panasonic equipment. Unlike the Sony system, however, Panasonic decided not to include it with its lower-priced consumer equipment. So you have to make sure that the Panasonic deck or camcorder you are buying has a 5-pin Control-M connector, otherwise it probably only has an IR Remote or worse, nothing. Although Control-M is only found on Panasonic’s prosumer equipment, a number of stand-alone and computer-based edit controllers support this protocol.

If you have ever hooked up an older computer system, you have used RS-232 connectors. The editing protocol, named after its cable connector, is an updated version of an old computer protocol that now enables you to hook your editing decks to a computer or compatible edit controller and use the computer to control all of your editing. The cables for this system are standard computer cables with 9-pin or 25-pin connectors at both ends. When you connect your computer to an editing deck with internal time code, you create a very accurate editor.
The RS-232 editing protocol is used by a number of prosumer editing decks. However, it is only supported by the more expensive edit controllers. If accuracy is important and you have the prosumer gear to support it, this is a very rigorous, function-filled editing protocol.

The big brother to RS-232, the RS-422 editing protocol is the protocol of choice for most professional gear. This protocol also uses a standard 9-pin connector and is capable of sending and receiving just about any information your decks and controllers need to do the job. With time-code support, this protocol allows frame-accurate editing and precise machine control.
Whatever your equipment’s capability, the RS-422 connector can use it to create a versatile environment to work in. Unfortunately, this protocol is only used by expensive gear and is only supported by the more expensive professional stand-alone and computer-based edit controllers.

One of the most explosive advances in the video field today is the rise of the Mini DV format. Finally, the industry developed an affordable format with the capabilities of its more expensive big brothers. By using the IEEE 1394 protocol, more affectionately known as "FireWire" (Apple) or "i.LINK" (Sony), the average videographer can now take advantage of a protocol that allows for total machine control and that supports time code. Most consumer, prosumer and professional DV equipment now use a single FireWire cable (4-pin or 6-pin connectors) to connect computers to the edit decks or camcorders (see Figure 4). With FireWire, it is now possible to control your consumer gear while dumping your footage onto your computer’s editing system.

Putting it all Together

You probably now have a better sense of the complexity of the edit protocol world. When building a system, keep in mind your specific editing needs. Ask yourself these questions: Is extreme accuracy important? Will your budget support only those protocols used by expensive prosumer gear? Do you already have an edit controller that supports only certain protocols? What protocol does your current camcorder or editing deck use? Will you be editing with a nonlinear system where accurate deck or camcorder control is not vital?
These questions should help you recognize those pieces of gear that are compatible and help you put together a system that best meets all of your editing needs.

Nothing ruins a video quicker than bad audio. There are ways to monitor audio for the best-sounding video and footage. We're guiding you through...