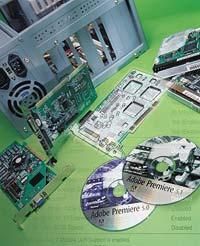 No question about it, the preferred method of video editing these days has become computer-based: using a hard drive to record and manipulate video, audio and images, instead of videotape.

Though the price of a fully configured editing computer has dropped drastically in the past couple of years, there are still those who would rather configure their existing computers for nonlinear editing. There are many good reasons to do this, not the least of which is the considerably lower cost of going this route. If you plan to do so, however, you should know that you may be opening up a big can of worms. Even if you consider yourself a whiz at installing PC hardware, you might find that installing and configuring a Wintel machine for nonlinear editing can be a hassle of epic proportions.

In this article, we’ll tell you the basics you need to know to configure an existing Windows-based PC for video editing. We’ll cover all the bases, from marshalling the basic components to the inevitable troubleshooting that results when things don’t work perfectly on the first try. Space does not permit us to go into all the possible problems that may arise with all the possible computer configurations. You can use this article as a general map of the terrain, but don’t think of it as a specific installation guide for your particular computer.


The basic components of a PC-based editing system are: