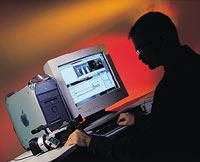 Those wild-eyed predictions from a few years back are beginning to come true. Internet video is now better looking and easier to use than ever before. It’s become so popular that the television networks are incorporating the Internet into their broadcasts lest they be left behind like the radio networks they replaced. And just who are the networks afraid of? You. Why? Because the Internet allows independent video producers to reach a global audience. With a camcorder, a computer, an Internet connection and a little creativity, anyone can produce and broadcast a program.

There is no questioning the popularity of the Internet. Recent studies indicate that teenagers would rather surf the Internet than vegetate in front of the TV. And with high-speed Internet access such as cable modems and Digital Subscriber Line (DSL) connections reaching more and more homes across the country, high-quality video distribution via the Internet is no longer a “wait until” scenario. Now is the time for videographers to catch the wave of Internet video. This article will provide a brief rundown of the different Internet video technologies, how they work and what they can do for independent video producers.

The Types of Internet Video

Traditional examples of this type of Internet video include MPEG clips, Video for Windows files and QuickTime videos. The upside of download-and-watch video is that it usually looks better than streamed video. That’s not due to any inherent superiority of download-and-watch video clips, but rather the fact that most producers will encode their download-and-watch clips with more bits of information per second of video. The downside of download-first video is that many viewers don’t want to download a video clip without seeing what it is about first. Depending on the size of the file and the speed of the viewer’s modem, some downloads can take hours before a clip can be played. That’s a long time to wait only to discover that the video is something you don’t care to watch.

Streaming video allows the viewer to watch an Internet video immediately as it downloads. This eliminates the waiting associated with the download-then-watch video clips, but at a price: to allow for faster delivery, streaming video is usually more compressed than download-then-watch video, resulting in lower video quality (smaller images at lower frame rates). Examples of streaming video include RealVideo clips, Windows Media clips and the newest version of QuickTime, which offers streaming QuickTime clips. Regardless of the tools they use, producers making video to stream will want to keep files as small as possible.

There is an exception to this though. Streaming video players will now play traditional download-then-watch video files much like streamed video using a feature known as buffered play. If your viewers use either the Windows Media Player or the RealPlayer to view a download-then-watch file, such as an MPEG clip, the player will download some of the file, and start playing it while the rest downloads. If your viewers use a fast Internet connection like DSL, they’ll be able to use buffered play on large download-then-watch files. People who are connected with a phone modem though, will have a rough time trying to buffer a large file, and although they might be able to watch a small bit of video, the buffer won’t be large enough to handle the difference between the bandwidth required to watch the file in real-time and the bandwidth available.

Now that you’ve been introduced to the different types of Internet video, let’s look at some of the tools that you will need to put your own video on the Internet.

What You Need to Get Started

You need only a few tools to get started with Internet video.

[1] A camcorder. Any camcorder will do, it doesn’t have to be digital, although a digital camcorder can make the whole process easier and generally of a higher quality.

[2] A computer. You’ll need a PC or Mac equipped with either a FireWire card (if you own a digital camcorder) or a digitizing card (if you own an analog camcorder). Since Internet video is typically less than full frame (640×480), and less than full speed (60 fields per second) you can make do with an inexpensive digitizing card. Remember, if you want to put out full screen, full speed video as well, you’ll need a beefier card. See our buyer’s guides to full-frame and less than full-frame digitizing and capture cards in our March 2000 issue.

[3] Nonlinear editing software. After capturing your raw footage you’ll want to edit your production down to an appropriate length. Most Web hosts (see

Most likely, the camcorder you use for your Internet video will be the one that you already own. If you are looking to purchase a new camcorder and plan to make Internet videos, then by all means get a digital camcorder equipped with a FireWire (or i.LINK) port. A digital camcorder (Mini DV or Digital8) with digital I/O allows you to transfer your video onto your computer without having to redigitize. This will give you higher-quality video from the beginning.

Whether you’re shooting your video with an analog or digital camcorder, your next step to creating an Internet video is to get the raw video clips onto your computer so that you can edit them together into a cohesive video production.

If you are using a digital camcorder, your easiest option is to use a computer that has a built-in and pre-configured FireWire or i.LINK port. If you already have a digital camcorder and a newer computer, you can install an after-market FireWire card in one of the expansion ports of your computer. If installing expansion cards isn’t your cup of tea, make sure you take your computer to a competent computer nerd to handle the installation. Installing video-editing hardware is not for the technically faint of heart.

If you are using an analog camcorder, you’ll need to use a computer equipped with a digitizing card. Many companies sell turnkey nonlinear editing computers with digitizing cards pre-installed. You could install a digitizing card on your current computer, but once again, if doing difficult computer upgrades isn’t for you, have someone else do the installation.

Almost every computer with a built-in FireWire (IEEE 1394) port or digitizer card comes bundled with video editing software. Don’t worry if the nonlinear editing software that is pre-installed in your computer is a “light” version that doesn’t offer the effects and transitions that the full version of the software allows. Fancy effects and transitions are things that you will want to leave out of Internet video productions (see Tips for Shooting and Editing Internet Video sidebar).

When you’re ready to save your project, your edited master will probably already be in a format (.AVI or .MOV) that you can post to the Internet for downloading. Many nonlinear editing packages now include options to save your file in a streaming format that will allow viewers to click and watch your Web video without having to wait for a lengthy download.

Getting Your Video Online

If you want to create a download-and-watch video file, you can post your project to your Web site as .AVI or .MOV files. Buffered play is an advantage unique to .MOV files. This simulates streaming, allowing the viewer to begin watching a buffered portion of a video after a short wait as the rest downloads. The .MOV file format is fully cross-platform compatible. Whatever file format you choose to post, you’ll be best served if you output your project as less than full frame and less than full motion video, so that your final file isn’t too large to download in a reasonable time. We suggest posting clips no larger than 320×240 at 15 frames per second. When you’re ready to upload your file to your host Web site, simply use an FTP (File Transport Protocol) utility to upload files to remote computers.

The streaming software that you use to convert to the proper format also has the tools to put your video on the Web. The big decision you’ll have to make here is where on the Net to have the software publish the file. If you expect to have more than a few people view your streaming video file at one time, you’ll want to make sure that you serve your video on a dedicated streaming video server rather than the Web server you use to host your regular Web site. Too many people trying to stream your clip can overload a small server.

A streaming video server is a special Web server that is set up for hosting streaming files. It uses a computer that is equipped to handle the rigors of streaming large amounts of video. The computer then connects to the Internet via a commercial, high-speed Internet connection that provides a connection fast enough to handle the severe demands of serving multiple streams of video. Also, a streaming server needs to have enough raw processing power to be able to serve up all of these video files. If you use a large ISP (Internet service provider) to host your Web site, it may already provide streaming video services. Check with your ISP to make sure.

It is possible to serve streamed video from a normal Web server without going through the added expense of storing your clips on a dedicated streaming server. This is fine if you don’t expect more than one viewer at a time to watch your video. If you plan to serve video of your family vacation for your friends and family to view, it would be fine to serve the clips from a standard Web server. But if you plan to attract hundreds or thousands of viewers, it will be necessary to use a dedicated streaming-video server.

As the technology improves, the Internet will revolutionize video distribution. It will give video producers access to a worldwide audience, and provide viewers with limitless program choices. Whether you want to post clips of your new baby for family members across the country, or broadcast your own sitcom to hundreds of Web fans, the Internet provides a fresh new channel of distribution.