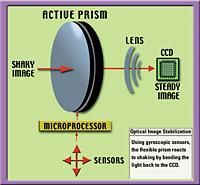 You just can’t beat physics, and as Isaac Newton pointed out, resistance to motion is proportional to mass. So today’s featherweight miracles of video are hard to hold still. And the amazing telephotos they put on camcorders today are truly awesome — but they magnify every tiny jiggle into a virtual earthquake on screen.

A problem like this is heaven-sent for inventors and several solutions popped up. They call their new devices image stabilizers. Taking a cue from nature, many of them work by sensing the motion of the camera and then compensating for it.

This article explores some of the different techniques that are used to stabilize images, and gives you some ideas for putting this miraculous technology to work.

Optical image stabilization (or OIS) uses some clever optics to correct the shakes. Optical stabilizing depends on motion sensors to tell if the camcorder is moving. Based on information about pitch, which is like tilting, and yaw, which is a fancy word for panning, the optical system compensates for the jitters.

When the two plates are parallel, the image goes straight through. But if you squeeze any of the four sides of the mechanism, it becomes a prism. A little squeeze on the bottom sends the light off to the top, correcting for a vertical shake of the camera.

The lens has a pair of tiny gyroscopes built into it to detect shake. When the camera jiggles, these gyros send signals to a computer chip that figures out how to compensate. The computer in turn sends a signal to the optical stabilizer telling it to pinch the sides of the prism to steer the image.

Canon pioneered optical stabilization back in the 80s, but has now licensed it to other vendors, like Sony.


Electronic image stabilization (or EIS) operates on completely different principles. Today’s camcorders use a CCD (Charge-Coupled Device), which is a grid of light sensors located at the focal plane of the lens. This is a little hi-tech marvel, smaller than a postage stamp, which converts light into electrical pulses that make up a video signal. That’s one of the reasons that camcorders got smaller and lighter: tiny CCDs replaced the bulky vidicon tube.

You can process the signal from a CCD with a computer. That turns image stabilizing into a programming problem.

First, you need to store a frame for comparison. That requires RAM, a computer term for memory. Now break the image into chunks, say a two-by-two grid. Compare a chunk from the current frame to a chunk from the preceding frame. The computer slides the old image around and checks for a fit. When it finds a good fit, it records the horizontal and vertical sliding distance for that chunk of screen.

After each chunk is analyzed like this, the computer collates the data. If all the fits are good and in the same direction, odds are you moved the camera. On the other hand, if the fit is bad or the chunks are moving in different directions, a moving object is the probable cause.

If it’s just an object moving, you don’t want to compensate. But if it’s the whole screen, you can compensate by sliding the current image in the direction opposite the move.

This technique does a fairly good job, but it can have some quirks. For instance, if you zoom in on a bouncing beach ball, some stabilizers will actually follow the ball — since it takes up so much screen space, it looks like camera motion. When you play the video back, it looks like there is a stationary ball with the world bouncing up and down in the background.

Newer electronic image stabilizers use camera motion, rather than the image motion, to correct shaking. These devices work better in situations like the bouncing beach ball. Like the optical systems, they use miniature gyros in the lens to detect motion.

That’s great; now we know how to detect and correct for camera moves. But when you slide the image up, won’t you have a black space at the bottom of the screen? Not if you use an off-screen part of the image, and that’s where electronic stabilizing gets tricky.

In order to have an off-screen area, you need to have a bigger CCD or else use a smaller window into a regular CCD.

Some older camcorders have low-resolution CCDs to begin with and electronic stabilization takes an even bigger bite out of that picture. To shift the image, these systems needed to take the smaller rectangle and then blow it up to fit the entire screen. That degrades the image quality. This is the same problem posed by digital zooming. The picture elements themselves get blown up and the image quality goes down.

Many modern chips provide a resolution that surpasses NTSC standards. You can get excellent video quality with less than 400,000 pixels on the CCD. If your camcorder has more pixels than that, the odds are good that it can handle electronic stabilization without degrading the image. It simply slides a rectangle around the CCD to follow the action. The rectangle represents a complete video image, so there’s no need to blow it up.


Recently, a new contender for image stabilization has presented itself. Computers have gotten quite good at analyzing images. They can scan a scene and pick out objects. Once an object has been recognized, it can be tracked. By tracking objects in the field of view, the computer can compensate for all kinds of shake that none of the other methods can deal with.

This technology is still in the research stages. It takes longer than a thirtieth of a second for a fast desktop computer to calculate and track objects, so it can’t be done on the fly just yet. But you can put your video through the computer and post-process it to remove the shakes.

It seems like computers double in power every eighteen months. In a few years, you might have the equivalent of today’s supercomputer in your thumb-sized camcorder. You’ll be able to stick it over your ear like a pencil and run around, while the computer keeps your image steady and clear.


One problem is shared, to a greater or lesser extent, by all image stabilizers. Since the mechanisms work by noticing camera movement and correcting it, how do you purposefully move the camera? If you start to pan, won’t the stabilizer try to compensate? The short answer is: yes.

As soon as you start a tilt or pan, you will notice that the viewfinder delays the action. The stabilizer is trying to stop what it considers to be a big shake.

An electronic stabilizer will try to stop the motion, but it will quickly run out of off-screen area. At that point, it will try gracefully to catch up, but some systems work better than others do. On early systems, you may see a jump as the stabilizer gives up trying to track the camera motion and just starts over.

Optical stabilizers work a little better, since the prism can only function over a narrow range of angles (to avoid rainbows). So when you move the camera, it pegs the prism to the max. At that point, the pan continues as if nothing happened.

Usually, this effect is more disconcerting to the videographer than the viewer. The camera operator knows that the view screen lags the actual motion, but the viewer doesn’t have the real world to confuse him — the resulting video looks fine.

Newer systems use more sophisticated software to minimize this effect. They attempt to distinguish between a pan and camera shake by measuring the magnitude of the motion. If the motion is large, it will assume a pan is intended. Stabilization is reserved for smaller motions. Still, with some camcorders, you may want to turn the stabilization off when you need to pan.


Both optical and electronic stabilization are marvels of technology. They are capable of detecting shake and then compensating for it, sixty times every second.

So what’s the best solution for you? Electronic or optical? Well, it depends on what you want to do and how much money you have.

Optical stabilization doesn’t suffer from a resolution problem. The image has been steered to the CCD, so the full resolution is available. But, it usually weighs and costs more. And since there are moving parts in the optical solution, it can suck up more battery juice than electronic stabilization.

Electronic stabilization is relatively simple, cheap and lightweight. And the modern ones don’t sacrifice the resolution when they kick in. For electronic stabilizers, the computer program that oversees the whole process may be the most important criteria.

As with any computer algorithm, there are as many ways to approach the problem as there are programmers. You should experiment with your stabilizer to see just how yours handles different situations. You should actually shoot video for the test, because it’s not always easy to see the difference by looking through the viewfinder — your brain is still compensating for the motion and it masks the effect.

Bottom line: any kind of image stabilization can improve your videos dramatically. The latest batch of camcorders has third- or fourth-generation software and represents a great improvement over the previous generations. Whereas optical systems were a clear winner a year ago, now the electronic systems have reached parity with them. If you’re in the market for a new camcorder, you can count on image stabilizers to give you incredible results — whether the magic is optical or electronic.

And you can save the Dramamine™ for your next boat ride.