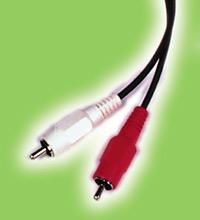 Visit any place where video editors work and you’ll likely find more than your share of cables: S-video cables, audio cables, power cables, composite video cablxes, headphone cables, microphone cables and cables for cable TV reception, among others. And if the cables aren’t confusing enough for you, there’s a whole host of connectors to go with them, with names like BNC, DIN, RCA, phone, phono, XLR and stereo mini-plug.

In this article, we’re going to take an in-depth look at some of the cables commonly used for video. We’ll take a look inside the four main cable types that home video producers deal with: composite (RCA-style) cables, S-video cables, RF cables and DV (IEEE 1394) cables.

Composite cables are perhaps the most commonly encountered cable type in consumer video. They often come in the box with home VCRs and camcorders. Sometimes, they come in groups of three attached cables–one with yellow RCA-style connectors for video and two with red and white connectors for stereo audio. Also included in this category are those cables that have yellow, red and white plugs on one end and a mini-plug connector on the other end. This type of cable often comes packaged with miniature camcorders that make use of the single connector on the camera body.

Often, video gear (especially professional video gear) will have BNC (bayonet nut coupling) connectors for composite video. The chief advantage of the BNC connector is its ability to lock in place with a push and a twist; this prevents connections from wiggling loose, a common problem with the typical RCA-style connectors.

On the video side, these cables carry composite signals, so called because the signal is a composite (or mixture) of all black-and-white and color information contained in the video signal. They usually consist of two wires running parallel to one another down the cable; one wire (power) corresponding to the tip of the connector and the other wire (ground) corresponding to the outside ring portion of the connector.

To send both chrominance and luminance information together on the same cable, the two signals must be mixed together in a process known as modulation. The modulation of the signals–and subsequent de-modulation at the other end–is what makes the composite video signal highly susceptible to generation loss (the tendency of a signal to degrade whenever you make copies of it). The only type of video cables that are more susceptible to generation loss are the RF cables used for cable television and antenna hook-up.

RF cables gave cable television its name. The ubiquitous RF cable can be found mostly on television sets and VCRs, as well as a few old-school camcorders. RF stands for radio frequency. The name is appropriate because this is the cable most commonly used to transfer radio-frequency signals from an antenna to the VCR or TV set–or even from the cable TV station to your house.

RF cables are generally made of coaxial cable, a cable that carries two metal leads, one inside the other. The two wires do not carry two different signals; instead, they carry the power and ground for a single signal, with the ground (outside) cable providing limited shielding from radio interference.

The RF cable (sometimes referred to as an F cable) provides the best means of long-distance signal transfer. This is why it’s most commonly used to connect cable TV stations to clients; with a heavily shielded cable and amplifiers in far-away neighborhoods, it’s possible to send an RF signal miles and miles without serious degradation. However, it is the worst solution for making copies or editing. Here’s why: remember how we told you that composite video signals mix the color and black-and-white signals into one? Well, the RF cable does this one better: it carries monaural audio along with the mixed color/black-and-white video signal. This means that problems arising from modulation/demodulation of the signal are multiplied in RF cables. Generation loss accrues at a much faster rate and even second-generation copies tend to have an abundance of video noise, audio noise and bleeding colors.

Camcorder enthusiasts who have television sets without composite video inputs (yes, they do still exist) must find some way to connect the video outputs of their camcorder to the RF-style connectors of their TV. VCRs usually provide the needed connections, but for some who still have older VCRs without video connectors, the RF-to-composite connection may require a separate inexpensive device called a modulator, readily available at consumer electronics outlets. Unfortunately, you can’t just whip up an adapter to connect composite cables directly to RF cables without a modulator, because RF cables transmit signals differently than composite cables.

In short, you should only use RF cables for viewing video and use some other type of cable for copying and editing.

One obvious way to solve the modulation problem that composite video and RF cables present is to leave the color and black-and-white information separate and send them down a pair of wires in the cable. That’s what S-video or Y/C, cables accomplish. (In video technical parlance, Y is the symbol for luminance and C is the symbol for chrominance.) Because S-video cables do not carry two signals modulated into one, they provide a very robust means of editing and copying video.

Looking at the end of an S-video connector, it’s easy to see that it consists of two pairs of wires instead of a single pair. One pair of wires (power and ground) carries the color information, while another carries the black-and-white information.

S-video connectors are found only on high-bandwidth cameras and VCRs. You’ll find them on S-VHS, Hi8 and DV equipment, but not on 8mm or VHS gear. More and more televisions are coming equipped with S-video connectors, but they are far from universal.

S-video cables do have some minor limitations. The most prominent is perhaps the length issue: when the cable goes beyond twenty-five or thirty feet, you notice significant degradation of the signal. For this reason, they are not the best solution for long-distance cable throws. There are devices (called line amplifiers) that can solve this problem, but they usually add a significant amount of noise to the signal.

There are adapters that convert Y/C signals to composite, but beware: because composite signals are modulated, the use of such an adapter negates the benefits of the S-video connection. In fact, it may make the problem worse. Inside these adapters is a small ceramic filter that de-modulates the composite signal before sending it down the S-video cable. This demodulation is the same sort of thing that adds noise to a composite signal. The use of an S-video-to-composite adapter just adds one more place where the signal can degrade when it’s copied.

S-video connections work best when used throughout your entire system. In other words, you won’t get all the benefits of S-video technology if you use composite video cables between, say, your special effects generator and your record VCR, with S-video cables everywhere else. It is possible to safely connect a monitor to the output of your record VCR with composite or even RF cables. Because they sit outside the main signal stream, these cables won’t affect the quality of your final product one bit.

The cable types we’ve dealt with so far are all similar in that they’re designed to carry analog signals. IEEE 1394 or FireWire or i.LINK, is special because its main purpose is to carry digital signals. Thus, you’ll find FireWire connectors only on equipment that’s designed to handle digital signals. In the consumer video market, this equates to Digital8 and Mini DV camcorders and VCRs.

Briefly, the difference between analog and digital signals is this: analog signals carry a continuously varying voltage, which corresponds directly to the type of signal that analog VCRs and televisions were designed to interpret. Digital signals, on the other hand, consist of long strings of numbers in binary notation (zeros and ones). Because digital signals only consist of two values–zero and one–they’re much more resistant to noise and other forms of signal degradation. This means that it’s possible to copy, say, twenty generations of DV or Digital8 footage without noticing the slightest loss of picture quality.

It’s important to remember that although the DV and Digital8 formats are the most prominent applications of FireWire technology to date, in essence FireWire technology has nothing to do with digital video. It’s just a way of transferring digital data from one location to another at a high rate of speed. FireWire is a serial data protocol, number 1394, approved by the IEEE (Institute of Electricians and Electronics Engineers).

FireWire connectors come in two basic types: the six-pin connector, agreed upon as a standard over five years ago and the smaller four-pin connector, which has become most prominent on digital camcorders and VCRs. While one connector type will not fit the other, both are interchangeable for all other purposes, which means it’s possible to have a FireWire cable with both types of connectors, one at either end.

One final note about cables: in general, it’s best to buy the highest quality you can afford, to insure the stability of your system and keep generation loss at bay. When purchasing cables, video editors are faced with a wide array of options. Even if you just want a simple yellow-tipped composite video cable, you still find yourself faced with a plethora of types from which to choose. Some boast greater shielding; some even come with built-in hook-and-loop cable ties to help you organize your workspace; some add gold tips. While gold certainly is an excellent conductor, it’s usually the case that a gold-tipped connector is an expensive and unnecessary addition to a quality cable. More often than not, an ordinary nickel-plated connector will perform identically to its gold-plated brethren and gold plating has a tendency to flake off in time.

To summarize: whenever you’re making analog video connections, use S-video cables if at all possible to minimize generation loss. If you can’t use S-video cables, use high-quality composite cables. Avoid using RF cables for anything but viewing video on a monitor. And if you have two or more pieces of video equipment with FireWire connectors, then by all means use FireWire and avoid the ill effects of generation loss entirely.

With all this in mind, go forth and cable your system with confidence.