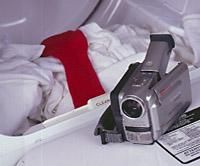 Ever finish shooting video, convinced you recorded great footage only to later discover that your whites weren’t crispy clean? Your colors weren’t vibrant and healthy? That the whole look of your video looked, well, wrong?

It’s likely your videos are suffering from bad white balance — the video equivalent of throwing a bright red sock in with a load of white linen. In this article, we’ll explore how your video can go awry because of improper white balance, and you’ll learn how to use your camcorder’s white balance function to keep your whites white and your hues healthy.

What happens when there’s a predominance of one color over the others–say green or yellow or blue? Your eyes automatically adjust to see it as white light, in spite of the fact that it has a slight color cast to it.

Every source of white light emits a different mix of colors. Normal household (tungsten) bulbs are strongest in red, while mid-day sunlight tends to be bluer. Quartz lamps are nearly as ruddy as tungsten bulbs, while fluorescent lamps tend to cast greens.

The now-immortalized physicist Lord Kelvin (who was known as William Thomson before he was given a title) devised a way to quantify this difference in color. He theorized (and later proved) that a "black body" of metal would emit different colors of light as it was heated up to higher and higher temperatures. The object would start glowing a dull red, then turn yellow, then a yellow-green and so on. Eventually it would pass blue and violet in the color spectrum as it moved toward true white-hot.

Fluorescent lamps defy the Kelvin scale because they actually emit a strange mix of colors with certain hues lacking. Most fluorescents have a strong spike of color in the green range of the spectrum, giving them, you guessed it, a greenish cast.


You’ve probably never noticed these different colors of white light because your brain quickly compensates for the color shift. Left to its own devices, the camcorder would dutifully record the different colors of "white" light. The result would be video that had a definite color tint to it, as if it had been shot through a piece of lightly colored glass. So to avoid this, manufacturers equip camcorders with something called a white balance circuit — an electronic color equalizer that isn’t nearly as foolproof as the one between your ears.

Inside the camcorder, electronic components divide the light spectrum into three parts–either red, green and blue or cyan, yellow and magenta (see "The Eye of the Camcorder: Understanding the CCD" in the October 1998 issue of Videomaker for more information on this). By varying the relative strength of these signals, the camcorder can make subtle or dramatic shifts in the color. It can compensate for white light that leans toward the red side, light that leans toward the blue side or anything in between.

It turns out that making the corrections for not-so-white light is easy–figuring out exactly what those corrections should be is the tricky part. This is the area where white balance schemes differ, and it’s also where they succeed or fail.

The simplest scheme, at least where operator input is concerned, is continuous automatic. Continuous auto looks at the light coming through the lens and tries to guess what sort of light is hitting the subject. As a rule, the auto setting does a remarkably good job of delivering accurate color. It can be fooled, however, by large areas of solid color, multiple light sources of different types and other devious lighting situations. When you can see colors shifting on the screen as you play back your tape, you know your auto white balance circuit was struggling.

A better way for your camcorder to sense the color of white light is to not do it at all. This is how preset white balance works. Before you start recording, you simply tell your camcorder what kind of light illuminates your subject–tungsten bulbs, daylight, fluorescent–and it does the work. If you’re shooting outdoors, you set your camcorder’s white balance to the sunlight or outdoor setting. Back in your living room, you select the indoor or tungsten preset. The camcorder has a stock correction it applies for each of the most common light sources, usually resulting in spot-on colors.

Why is this method the best? Because it accounts for the specific lighting conditions you’re shooting in (something a preset doesn’t do), and it can’t be fooled the way a continuous auto setting can be. A preset, for example, won’t know that your tungsten bulb light source is even ruddier than usual because you turned it down slightly with a dimmer. Nor will it know that your subject is sitting in a mix of tungsten light and daylight from an outside window (which have dramatically different color temperatures).


Sometimes, having your white balance set incorrectly can make for a desirable effect. The result is video with a definite color cast, which may enhance the mood you’re after. Shoot indoors with an outdoor preset, for example, and your video will take on a warm, yellow/red tint. Shoot outdoors with an indoor preset, and you’ll get a cold, bluish look to your video. Couple this look with too small an iris setting (to underexpose the video), and you can make the video you shot during the day look much like nighttime footage.

In most shooting situations, though, you want your camcorder’s white balance system to record the most accurate color possible. Which is after all, what it is designed to do.