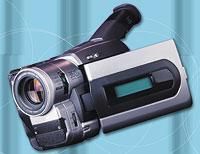 Camcorders sure do have a lot of buttons, dials and menu functions. New shooters can be overwhelmed by all the features and functions on the latest camcorders. Some videographers have shot for years without pressing certain buttons because they just don’t know what they are for. Whether your camcorder allows you to activate a function by pressing a button, turning a dial or opening a menu, this simple guide will explain the features built into today’s camcorders.

Also called the aperture, the iris controls the size of the lens opening to govern the amount of light admitted. The iris is one of the principle components in the camcorder’s exposure control system. An open iris lets in more light than a closed iris. In all consumer camcorders, the iris is controlled automatically and in better cameras it can be adjusted manually as well.

Digital zoom electronically enlarges the central portion of the image beyond the limits of the zoom lens’ glass elements. As the zoom ratio increases (20:1, 50:1, etc.) the image recorded full-frame on tape represents a smaller part of the image formed at the chip. Since the original image consists of individual dots (“pixels”), enlarging part of it progressively coarsens the picture, lowering resolution and losing detail.

The audio dub feature allows you to replace a length of sound on your edited tape without disturbing the picture. Typically found on Mini DV and VHS-family models but not on 8mm-family camcorders.

The diopter adjustment allows the shooter to adjust the clarity of the lens elements in the viewfinder itself.

Shutter is an electronic control that governs the amount of time during which incoming light forms a single video field. (Each video image or “frame” consists of two fields.) Shutter speeds on consumer camcorders typically range from 1/60th to 1/10,000th of a second. Video cameras lack physical shutters. Instead, they control exposure length by adjusting the amount of time during which the CCD is allowed to accumulate a charge, before dumping it and starting another video field.

The set of functions that enables a camcorder to play, rewind, fast forward and pause video that has been recorded to tape. Almost all camcorders will function as a recorder (camera) and as a VCR (player), but not both at once.

Focus is the adjustment of the camcorder lens to keep an image sharp in appearance. The automatic focus system adjusts the lens to focus on whatever appears in the center portion of the frame. This can be problematic as auto focus can drift as elements pass before the lens. Manual focus allows the user to adjust the focus.

Record/Review (which goes by different names on different cameras) allows one touch playback of the last few seconds of video that have been shot.

Image stabilization is a feature that compensates, to some degree, for camera shake. Electronic Image Stabilization (EIS) works at the chip level, by recording a large but incomplete portion of the total image created by the chip. When the camera shakes in one direction, the image portion recorded moves proportionately in the opposite direction, canceling out the camera movement. Optical Image Stabilization (OIS) moves actual glass elements, directing incoming light through a movable prism. When the image moves off the center axis, the front element of the prism tilts to re-center the image.

Video insert allows you to replace a length of picture on your edited tape without disturbing the sound. Typically found on VHS-family models, but not 8mm-family camcorders.

This jack lets you substitute a stand-alone mike for the camcorder’s built-in model. Plugging the mike into this jack automatically disables the internal mike.

Backlight compensation is a control that can improve exposure when dark subjects are shot against brighter backgrounds. Simple backlight controls increase exposure by a preset amount. More sophisticated versions can be fine-tuned manually.

Standby is a battery-saving feature. If record is not enabled within a certain period, the standby function powers down all camera activities. Some standby functions are enabled automatically, others must be activated manually.

Record/Pause is the (typically red) control that enables the camcorder’s record function. Pressing it once begins recording, pressing it again pauses the process.

This jack lets you monitor sound recording with a pair of headphones.

This button allows the user to choose from several pre-generated graphics in the camera. Most allow you to create and store a series of title pages in memory.

This jack permits remote control of the camcorder by an edit-control system, either standalone or in a desktop computer.

Digital effects may include transitional effects like fades and wipes for use between video sequences, or visual effects like black and white, sepia tone and posterize that colorize or process the video as you record. If you add a visual effect to your original camera tape, you cannot change it.

The viewfinder is the display on which you watch the image you are taping. Some are color, some black and white. Many camcorders include large flip-out LCD screens, mounted externally so you can view them easily.