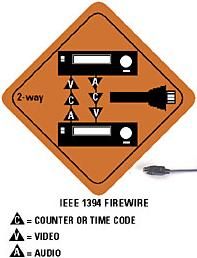 When you climb behind the wheel of a car, roadside signs are a crucial part of the driving experience. These signs tell you when to stop, when you can resume and where you are relative to where you want to be.

A video editing protocol (or communication language) works a bit like traffic signs for your VCR. The protocol tells the VCR when to stop, when to go and how best to reach its destination. Without some way to maintain order on the video editing freeway, massive pileups–and botched edits–would be the norm.

Over the years, manufacturers have devised many ways to keep VCRs between the white lines when used for editing. These editing protocols range from simple to complex, sloppy to extremely accurate. In the next few pages, we’ll take a look at the broad range of editing protocols available to the videographer.

The simplest editing "protocol" is no protocol at all–it’s two video devices, two fingers and a human functioning as traffic cop. Though there are no editing wires or connectors to be found, this setup can teach us a lot about the edit control process.

When it’s time to edit manually, the human edit controller (you, in this example) sends the necessary commands to the record deck to find the end of the last scene. Once found, you place the deck in record-pause mode and visually check its status to verify that it’s ready to record. After finding the correct scene on the playback deck, you begin playing the source footage.

What can we learn about edit control from this example? First, accurate editing requires two-way communication. Not only were you telling the decks what to do, but they were "reporting back" to you by way of their displays. Second, efficient editing requires the ability to fully control both decks. In this example, you were doing more than just telling the record deck when to begin recording–you were able to engage its transport to locate specific spots on the tape.

Though manual editing may not be held in high regard by most, few consumer-level electronic editing protocols are as flexible (or, in some cases, even as accurate) as the "two finger" protocol.


Beyond "two-finger" editing, the remote pause control is the simplest editing protocol available. Like a traffic light with green and red signals only, this protocol basically carries just two commands: pause and un-pause. With these two commands, one video device can prompt another to begin recording at a certain time, and stop recording at a later point. Since the playback deck is already in motion when it sends the command to record, edits tend to be relatively stable. Less sophisticated is the remote pause setup that simply links two pause buttons–push the pause button on one VCR or camcorder, and the other starts (or stops) at the same time.

Remote pause is a one-way protocol; the device sending the command to pause or un-pause has no way of knowing if the receiving deck has acted on the command. Likewise, remote pause does not carry time code information. Remote pause jacks come in a few different styles, with 2-conductor mini and RCA-style being the most common. These jacks can bear several different names as well, including "Edit," "Synchro-edit" and "Control-P."

Though similar, remote pause schemes from different manufacturers aren’t always compatible. Check with each manufacturer for more details. Finally, certain edit controllers use remote pause to control the record deck, and a more sophisticated protocol for the playback deck.


Up one notch on the sophistication scale is the infrared remote protocol. Like remote pause, infrared supports only one-way communication. But instead of being limited to just pause and un-pause, the infrared protocol supports numerous commands. An infrared emitter can tell a VCR or camcorder to fast-forward or rewind, stop, reset its counter, eject the tape, toggle audio monitoring modes and much more. These commands may come from a stand-alone edit controller, a VCR with built-in edit controller or computer-based editor.


Sony’s Control-S protocol is the most sophisticated of the one-way protocols. Though it may look like a simple remote pause connector, Control-S supports a wide range of transport, recording and special commands. Like all one-way protocols, however, it doesn’t allow the device receiving the commands to talk back or report its status to the sending device.

In the past, a handful of Sony edit controllers and edit-capable VCRs would send Control-S commands. Today, Control-S has been all but replaced by Control-L.


With the introduction of Control-L, Sony brought a full-featured two-way protocol to the 8mm family of camcorders and VCRs. Control-L boasts a richer command set than Control-S, and includes a full set of status codes for two-way communication. This allows a deck to report back as to what the tape location is, what transport mode it’s in, etc. With decks that support time code, the Control-L protocol will carry precise time information back from the deck. Thanks to its two-way lines of communication and tape time information capabilities, Control-L reigns as one of the most efficient and accurate consumer-level protocols. With true time code (like Sony’s RCTC), a Control-L editing system can deliver edits with accuracy of plus/minus a few frames.

Control-L used a 5-pin connector when it first came out, later switching to a stereo (three-conductor) minijack. Though originally introduced for the 8mm and Hi8 formats, several of Sony’s S-VHS and VHS VCRs now boast Control-L jacks. Virtually every consumer-level edit controller supports Control-L, as do many computer-based edit controllers. Certain Sony decks have built-in edit controllers that can deliver reasonably accurate edits when connected to another Control-L device.


It’s the nature of the electronics industry to breed competing standards, and editing protocols are no exception. Panasonic’s Control-M protocol, for example, is similar in many ways to Sony’s Control-L protocol, yet the two are completely incompatible. Like Control-L, Control-M is a two-way protocol that supports an extensive command set. Control-M passes transport commands, deck status information and real-time counter info. Control-M is a flexible editing protocol, but its accuracy is limited by the lack of internal time code on the decks that offer it. Control-M’s accuracy is roughly equivalent to that of a Control-L system without timecode.

The Control-M protocol uses a proprietary 5-pin jack, netting it the nickname "Panasonic 5-pin." The protocol never really trickled down into Panasonic’s lower-priced consumer equipment. Instead, you’ll find these jacks only on Panasonic’s semi-pro VHS and S-VHS decks as well as a handful of camcorders. Many stand-alone edit controllers support the Control-M protocol, as do several computer-based editing systems.

RS-422 is the de facto standard for professional VCRs, while RS-232 has made some inroads into semi-pro VCRs used for editing, multimedia and presentation. Both standards offer the same functionality, and may even use the same type of connector. A nine-pin connector (DB-9) is commonly used for RS-422; RS-232 protocols may use nine-pin or 25-pin (DB-25) connectors.

These serial standards are only as flexible and feature-laden as the specific manufacturer equips them to be. Sony’s RS-422 protocol is probably the most universal, offering a rich command set and full two-way communication. Few consumer-level stand-alone edit controllers use RS-232 or RS-422 protocols, though there are some higher-priced computer-based linear editors that do. Throw time code into the equation, and most RS-232 and RS-422 editing system offer true single-frame accuracy.

Sony’s VISCA (Video System Control Architecture) is a two-way protocol that allows a computer to communicate with a Control-L device. A hardware box usually translates the 25-pin RS-232 output into a normal Control-L signal. As such, VISCA offers all the features and accuracy of the Control-L protocol.


The Mini DV format uses the IEEE 1394 (i.LINK or FireWire) standard to carry digital audio and video. Like RS-232 and RS-422, however, the IEEE 1394 standard poses no restrictions on what types of data it can carry. The FireWire cable could carry transport commands, time code and other status info as well as it carries digital video and audio (currently, DV uses just a fraction of the capacity of this ultra-fast standard).

Most DV products pack all this information onto the i.LINK cable, requiring just a single cable between VCRs, edit controller and computers. There are, however, some DV camcorders that need both FireWire and Control-L cables connected to perform editing in the digital domain.


Though progress has been slow, consumer edit protocols are improving. With the vast capacity of DV, the future looks bright for editors everywhere. Tomorrow’s edit protocols may forever spell the end of fender-benders, lengthy detours and missed appointments on the consumer video freeway.