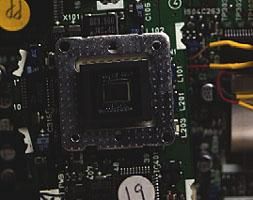 Your spouse poses proudly in front of the Statue of Liberty as you run off several seconds of tape on your camcorder. “Got it!” you proclaim, as you check the monument off on your list of things to preserve on tape. Just another of the thousands of images you have gathered on your trip to the Big Apple. But wait! Have you ever stopped to think about what an amazing device you have in your camcorder? Probably not.

You may think a camcorder is just an appliance, like a refrigerator only smaller. Flash some plastic at the store clerk, lug your purchase home, and fire that puppy up. Nothing to it, right?

Not quite. Fridges and camcorders are both appliances the way amoebas and humans are both organisms. The old icebox keeps stuff cold and that’s all you ask from it. By contrast, think about just one of your camcorder’s amazing abilities: making pictures:

To see just how amazing that is, climb aboard the tour bus and ride along as we follow the video image on its incredible journey from a bunch of light rays bouncing off your spouse at the Statue of Liberty to the moment when said spouse appears on your TV screen, Statue and all. We’ll start our quick V.I.P. tour where those light rays begin their conversion: at the lens.

Some Hunks of Glass
If you think a lens is just a piece of glass, look at what you get when you shine light through a glass window onto a wall.

You get light on a wall.

No image, nothing. That’s because light is not a ready-made album of pictures waiting for recording. It’s merely incoherent photons until the camcorder lens transforms them. In the incredibly short time it takes to go from the front of the lens to the back, those disorderly light rays are shaped up into a picture and then further disciplined by four crucial systems: focus, aperture, zoom, and image stabilizer.

The lens creates a picture by bending and aiming the rays so they all converge on a single surface in the same relationship they had when they originally bounced off the Statue and your spouse.

Along the way, the focusing system has cleaned them up so the picture’s nice and sharp. The lens does this automatically by constantly moving its internal pieces around in obedience to circuits that can “see” fuzzy pictures faster than you can.

The light rays have also been toned down a bit by the aperture system, basically a hole that widens or narrows with changing light levels to ensure that the same amount always gets through. Like focus, this system is automated so you don’t have to think about what it’s doing in there.

But you are concerned with how big your image is: first wide enough to show the whole Statue, then close enough to isolate the Statue’s head and raised torch, then closer still to frame your spouse’s face. One button makes it bigger; the other makes it smaller.

Those buttons control the zoom system, a motor-driven group of lens parts that move back and forth to reduce or enlarge the amount of the picture that hits the imaging surface. This small miracle is invisible to you, but the technology is so exquisite that it wasn’t perfected for a full century after the invention of photography.

“Lens Control, this is Motion Sensor. We have a point oh-two-degree wobble.”

“Roger, Sensor. Stabilizer, do you copy?”

In other words, the optical stabilization system detects the precise extent and direction of every tiny bobble and moves lens elements in exactly the opposite direction to re-center the light on the imaging surface. This compensation process is so fast that it happens 30 times per second without breaking a sweat.

Solar Power
The “imaging surface” we mentioned is a rectangle of solar cells–you know: the critters that turn light into electricity. The more light, the more power. Simple, right?

Yes, except for a few trifling facts:

That works out to something like 4 million cells per square inch. To put it another way, if the camera chip was built from motor home solar panels, it would be the size of two football fields.

Nonetheless, every single sensor is precisely covered with its own intensifying lens and a color filter and then ganged with two others in a red-green-blue triangle so that their combined and weighted signals can represent any one of millions of different colors and shades. Throw together the signals from maybe 120,000 of those triangles, stir briskly, and the light rays that only recently turned into a visible picture have already shape-shifted again, into an electrical code.

How does this brisk stirring happen? Only Dilbert understands the fine points, but here’s a painless digest.

Thirty times a second they yell, “dump!” and every charge in every one of those maybe 360,000 sensors unloads like a peach on a food plant conveyor belt. During this signal processing:

Thirty times a second, 1800 times a minute, 108,000 times an hour, these circuits code and ship full-color video images as a complex electrical signal.

Laying It All Down
Where, exactly, do they ship it? To the recorder section, where the pulsing current varies the strength of an electromagnet “record head” that’s touching a tape coated with metal particles. As the tape moves past the head, the changing charge magnetizes different particles in a way that mirrors the video signal. Information that began life as a gang of light rays is transformed yet again, into patterns of magnetism on videotape.

How can all that info fit on the tape? If you peek through the little window in the camcorder you’ll see the recording tape moving slower than a turtle with the gout. Which leads us to another amazement: the recording system.

When you insert a cassette, your camera opens it and pulls out a length of tape. Since there’s no free end to thread around the gizmos in the recording bay, the clever mechanism thrusts multiple fingers into the loop and then pushes the tape against working parts from inside. If it misaligns the tape by just the thickness of a postage stamp the loading system will mess up the recording. But it rarely does.

And it gets even stranger. The slow tape speed is possible because the “heads” that magnetize the tape aren’t just sitting there: they’re spinning around on that silver drum you can see when you look in the open tape compartment. Because the drum revolves at an angle to the tape path, it magnetizes a track in a series of diagonal swipes. Though the tape is moping along at under one inch per second, the diagonal sections of video signal add up to 100 times that length. One hundred inches per second makes room for a mighty big helping of signal.

So now we’ve followed your spouse and Lady Liberty from light rays to optical image to individual charges to a composite signal to a magnetized tape track in a simple “appliance” that delivers these prodigies with excellent reliability for years at a time. Even compared to a car or computer, your camcorder may well be the most sophisticated thing you’ve ever owned.

Oh: we didn’t finish the journey from tape to TV to the viewers’ eyeballs, did we? Well no problem. To get an idea of that half of the journey, simply re-read this piece.