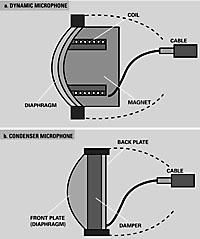 In our quest for good images, we often forget how important sound is to our production. Even the greatest sound can’t salvage bad visuals but good audio can enhance almost any scene. On the other hand, bad sound can ruin any image. We rely on microphones to get sound into our camcorders and while we use them often, we rarely stop to think about how they work.

The first sound recordings were made without microphone at all. The person spoke or made music into a horn that had a flexible diaphragm at the other end. A needle attached to the diaphragm traced out a wavy line in the recording medium as the diaphragm vibrated in response to the sound.

The first successful application of a device we would call a microphone was made in 1876 by Alexander Graham Bell as the pickup device for his telephone, although he didn’t call it that. The word microphone was coined a little later in reference to the carbon microphone. These mikes used carbon granules packed between two conductive membranes as the sensing element. From this, the entire array of modern microphones developed.

In order to understand how microphones work, we’ll need to review a few basics. An electric current is simply a flow of electrons. If the flow varies in such a way as to convey information, it’s called a signal. It can vary randomly or in response to something we don’t want. We call this noise.

Think of your garden hose as a wire and the flowing water as electrons. Just as a pump pushes water through the hose, voltage pushes electrons through a wire. The water moves only in response to a pressure or, more properly, a pressure difference. Voltage is analogous to pressure; it’s necessary to move electrons.

If we move a wire (a conductor) in a magnetic field, it generates a voltage. If the wire is part of a complete circuit, that voltage will cause a current to flow. This is how a generator works. For example, a rotor (the part that rotates with the shaft) contains loops of wire and the stator (the stationary part) contains a magnet-the origin of the electric field mentioned earlier.

On the other hand, if we pass a current through a conductor that is in a magnetic field, it will cause a repulsing force that will move the conductor. This is how electric motors work. The rotor has loops of wire and the stator forms an electromagnet. If you’re thinking that the difference between motors and generators is rather subtle, it is.

What Is Sound, Anyway?

If you pluck the string on a guitar, it vibrates and causes the sound chamber of the instrument to vibrate. When the walls of the chamber move in one direction, they push the molecules together so that there is a greater-than-average number of them in the space near it. This we call a compression. When the chamber moves in the other direction, it leaves a spot where there are fewer molecules; that’s called a rarefaction (see figure 1). This succession of compression and rarefaction spreads out like ripples on a pond after you drop a pebble into it. The ripples strike everything in their path, including your eardrum. Your ear converts them into stimuli which your brain interprets as sound. A microphone works in much the same way as your ear, by converting sound waves into electrical signals that recording equipment can "hear."

How Do Mikes Work?

A microphone has a very thin diaphragm, similar to the thin membrane of your inner ear. When hit by sound waves, the diaphragm moves back and forth along with its coil. This motion in the magnetic field produces a signal.

It’s this signal that is amplified, processed, perhaps recorded and recovered from the recording medium, reamplified and finally sent to a speaker. The speaker has a magnet and a coil of wire attached to a flexible cone. The varying current passing through the coil in the magnetic field causes the coil to move together with the cone, thus reproducing the sound. If you are thinking that the difference between a dynamic mike and a speaker is rather subtle, it is.

Mikes commonly come in three distinct types: dynamic or moving coil mikes, ribbon mikes and condenser mikes. Dynamic mikes are rugged instruments and are suitable for a wide variety of uses. The dynamic mike consists of a flexible diaphragm with a coil of wire attached, surrounded by a magnet (see figure 2).

Ribbon mikes are similar to dynamic mikes except that in place of a rugged diaphragm, they have a ribbon of thin metal foil suspended in a magnetic field. Sound waves cause the ribbon to vibrate and a varying voltage is generated – bingo, a signal. These are fragile instruments and you will probably see fewer of them than either of the other types. Incidentally, you should never blow into any mike to see if it is on; this may damage the pickup element. To test a mike, simply talk across it.

A condenser mike (again, figure 2) contains two plates separated by an insulating air gap. The forward-facing plate is flexible and vibrates in response to sound waves. As it moves closer to or farther from the back plate, its capacity to store electrons changes. This means that it will allow more or fewer electrons onto its plate and the wire attached to it will see a changing current and consequently a changing voltage–gotcha, another signal.

Since a condenser mike needs a voltage to charge its condenser and a preamp for its delicate signal, it will always need some power source. Either it will need a battery within it or the camcorder or mixer will feed so-called phantom power to it.

Condenser mikes are available in a variety of prices and the better ones are capable of very high quality sound reproduction. You’ll find them very widely used; you may have one in your camcorder.

The directional sensitivity or pickup pattern of your microphone is one of the most important considerations in its use (figure 3). Some mikes are omnidirectional; they pick up sound from every direction. They are useful in situations where you want to record everything going around your scene.

Another common pickup pattern is called cardioid, because of its heart-like pick up zone. It is most sensitive to sounds in front of it and picks up sound over an almost complete semicircle. They are used most often when the mike can be seen in the picture, as with interviews.

Next is a series of patterns called hypercardioid, supercardioid and ultracardioid. These mikes have a progressively narrower angle of acceptance. You’ll most often hear the term "shotgun" used to describe them. A shotgun mike accepts sound over a very narrow angle directly in front and rejects sound from the side. They are most useful when you want to get good sound from a subject without having the mike seen in the picture. A good quality shotgun mike is effective in rejecting sound from the side but it will pick up sound from behind the subject. In those outdoor scenes, look down the street to see what might interfere with your talent’s speech.

No discussion of microphones would be complete without including the lavalier. These are the tiny mikes that look like a tie clasp. Even when clipped on a person’s clothing, they are inconspicuous. High quality lavaliers can be located inside clothing without picking up rustling noises; this makes them very useful for videographers.

Another configuration you may see is the boundary mike or pressure zone mike (PZM). This type of mike has a sensing element attached to one side of a sheet of sound reflective material. A transparent sheet of plastic is frequently used. It has a nearly hemispherical pickup pattern but rejects sound from behind it. It’s used where audience noise or reflected sound from walls is a problem.

Their XLR connectors–the big three-pin variety, easily recognize the highest quality mikes. Their function is to deliver a balanced signal that will cancel interference. While professional mixers and camcorders accept these plugs directly, consumer equipment will usually require the use of an adapter.

As with most equipment, it pays to get the best you can afford. Never forget, however, that a medium-grade microphone used well will give better sound than a great mike used improperly.

How Do We Use These Things?

The three most important factors in the sound quality acquired by your microphone are proximity, proximity and proximity. Getting the mike close covers a multitude of sins. It enhances presence and quality as well as isolating the sound from extraneous noise. This brings us to a hierarchy of desirability of equipment features.

Most consumer camcorders have automatic audio gain control with no manual override. Whenever the camera hears no strong sound, the automatic gain control (AGC) will crank up the gain until it finds one. If the talent pauses between sentences, the circuit will crank up the volume until a rushing sound (circuit noise) is heard. It sounds like you are conducting an interview at the beach when the surf’s up-but the surf is only up when the talent stops talking.

More desirable, although not commonly found on consumer camcorders, is a manual override. You can allow the automatic gain control to take care of those chaotic situations when you can’t predict the sound level, but still have the freedom to set the level manually. Most importantly, look for an external microphone jack. It’s the only way you can use any external mike.