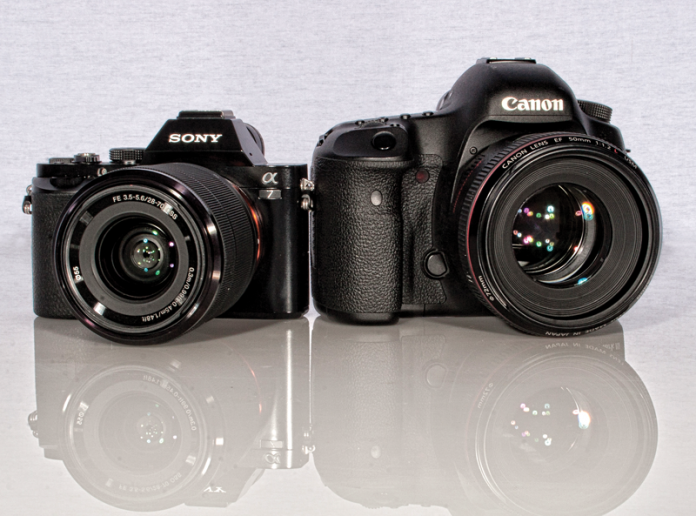 There is a great debate as to which type of camera is better for shooting video. Let's take a look at the differences between mirrorless and DSLRs, as well as some of the other significant factors in how these cameras perform.

One of the major differences between mirrorless and DSLR cameras is size. A DSLR has a mirror in front of the image sensor, allowing the user to look into an optical viewfinder and thru the lens. When the shutter is released to take a still picture, the mirror drops momentarily exposing the image sensor. When shooting video, the mirror remains down, and the video can be seen on the LCD screen in the same way it does on a mirrorless camera.

Because of the mirror mechanism, DSLRs tend to be larger and heavier than mirrorless cameras. DSLRs, at their smallest, weigh around a pound and a half and can fit in a small bag. Mirrorless cameras can weigh as little as half a pound and can be pocket-sized with a small lens. If you’re shooting on a tripod or a shoulder rig, the difference in size can be insignificant.

The digital image processors (DSP) in both DSLRs and mirrorless cameras vary widely in capabilities. A slow processor not only affects the number of stills per second you can take with the camera, it also affects video performance as well. The frame rates, resolutions and bit rates a camera can shoot in are all affected by the camera's processor. Just because a camera is more expensive doesn’t mean the processor will work well for video. A camera’s ability to record in higher frame rates — like 60fps — and higher bit rates — 25Mbps or higher — is a better indication of the processor's ability to produce high quality video.

DSLRs have the broadest selection of lenses from macro lenses to super-telephoto to fully manual cinema lenses. You can find a lens for almost any application to fit your DSLR's mount. While the selection of lenses for mirrorless cameras is limited, the lenses are smaller and lighter than comparable DSLR lenses. You can often find adapters for DSLR lenses to work on the smaller lens mounts of mirrorless cameras, but these adapters vary in quality, and some lens functions such as autofocus and iris control (aperture control) may not work.

Many mirrorless cameras lack viewfinders; those that have them use electronic viewfinders, or EVFs, which can be difficult to see detail. Fortunately, many come with the advantage of being able to digitally zoom from within the EVF for focus assist.

When a DSLR is in video mode, the optical viewfinder is disabled, and the video is viewable on the LCD screen making it function much like a mirrorless camera.

Until recently, DSLRs and mirrorless cameras only had contrast detection autofocus in video mode. Contrast detection looks for the areas of highest contrast in a shot and then moves the lens until these areas are sharp. This is what gives you that drifting in and out of focus in videos shot with some cameras. Now many mirrorless cameras offer faster phase detection autofocus for video. This technology is used by DSLRs predominantly for stills. Some cameras use a combination of both systems and call it hybrid autofocus.

One of the major differences between mirrorless and DSLR cameras is size.

Mirrorless cameras and DSLRs both record video with varying levels of compression. It can be hard to get past all the technical descriptions and figure out what specs you need to shoot your videos in. Simply put, the more compression used on a video file then the smaller it is, and the more likely you are to see a loss in image quality. Compression not only affects the image quality of your video, it also affects the changes you can make to it such as color correction and chroma keying. Highly compressed video is difficult to alter in post.

When you look at the broad range of mirrorless and DSLR cameras, DSLRs do tend to have lower rates of compression when recording video. Although some higher-end mirrorless cameras do offer low compression recording options, it really depends on the types of productions you shoot as to what will work best for you.

Many DSLRs and most mirrorless cameras record compressed audio, often using AAC compression. Much like compressed video, while you may not always notice a difference listening to compressed audio, you can start to have problems when you try to use noise reduction, EQ or other effects. Even having the audio re-compressed when it’s uploaded to the web can reduce the sound quality. Recording audio in PCM (wav) format gives you more ability to alter the audio and retain sound quality.

One of the main advantages to mirrorless cameras is their small size, but this small form factor also limits the number of manual controls as well as input and output ports on the camera. The same is true for many smaller DSLRs. Many small cameras lack video outputs, audio outputs and even microphone inputs. While most controls are accessible through the menu, many controls on smaller cameras like audio levels are not there at all.

Recording times vary greatly on DSLRs and mirrorless cameras. This can be due to the type of memory card used, the formatting of the card or the compression used on the video. If you need long record times on a camera with a clean (camera data free) HDMI out, pairing with an external recorder is a good option. Because of size, the battery life on smaller cameras is also often limited.

While some camera accessories are fairly generic, like monitors and recorders, some are model specific, like battery grips (these attach to the bottom of the camera and tend to carry two camera batteries when the camera can only hold one). DSLRs have a lot more accessories available to help you shoot video. Some of these can be used with mirrorless cameras, but the options are limited.

Recorder/monitor combos like the Atomos Ninja can help you get longer record times and also speed up your workflow by recording to a 2.5” SSD or a hard drive that can be plugged straight into an editing system. These recorders can be used with any camera with a clean — devoid of the camera’s on-screen graphics — HDMI out.

Cinema style follow focus units can be helpful in pulling focus or controlling your zoom. They are difficult to use on small lenses so they may not work well with all mirrorless camera lenses.

Being able to find answers online to technical questions and creative challenges regarding your camera can be very helpful. There are more resources to be found online for video production with DSLRs from technical information to stylistic ideas and guides. There are a few mirrorless cameras like the Panasonic GH3 and GH4 that have large online followings, but resources are otherwise limited.

Do you need a camera that’s super compact and lightweight? If so, then a small, mirrorless camera like the Nikon 1 might be right for you. Are you looking for a camera with a full-frame sensor that’s under $2000? Canon’s 6D DSLR or Sony’s mirrorless Alpha a7 may work great for you. Do you have to shoot and post online ASAP? The mirrorless Samsung Galaxy NX which runs Android 4.2.2 and has built in WiFi and 4G might be a good option.  Do you want an affordable camera with a huge variety of lenses and accessories? The Canon Rebel T5i DSLR might be the solution you're looking for.

Many of the newer models of mirrorless and DSLR cameras share similar features, making the difference between these two types of cameras minimal. Besides the mirror, the biggest difference is weight and size. On a tripod that doesn’t mean much. With the camera hand held, a little more weight and a larger body can make the camera easier to keep steady.

Focus on the features that are important to you, rather than making your camera decision based on mirrorless or DSLR. Think about what you’ll be shooting and the environment you'll be working in. Finding a camera that has the right features for the types of shoots you do is the first step in selecting the best gear for your productions.

All of the terms used for the size of digital image sensors on cameras can be overwhelming, but you need to understand image sensor sizes in order to determine what size lens you’ll want to use. Sensor sizes still relate to 35mm film, and a full-frame sensor is said to be around the same size as a 35mm film frame. Smaller sensors are identified by their crop factor from 35mm.

The more common sizes for video are:

While the crop factors seem odd at first, it becomes useful when you try to figure the effective focal length of a lens matched with a sensor. A 50mm lens used with a MFT sensor with a 2X crop will have an effective focal length of 100mm, that is, it’s like using a 100mm lens with a full-frame sensor. If you’re trying to match the view angle of a 50mm lens used with a full-frame sensor and your camera has an APS-C 1.6x Crop Factor, then a 30mm lens will give you a 48mm equivalency, which is pretty close.

There are websites and mobile apps that have calculators for focal length. By understanding how image sensor sizes alter effective focal length, it's easier to figure out the types of shot framing you'll achieve with different lenses on various cameras.

Odin Lindblom is an award-winning filmmaker who also shoots commercial and corporate video.