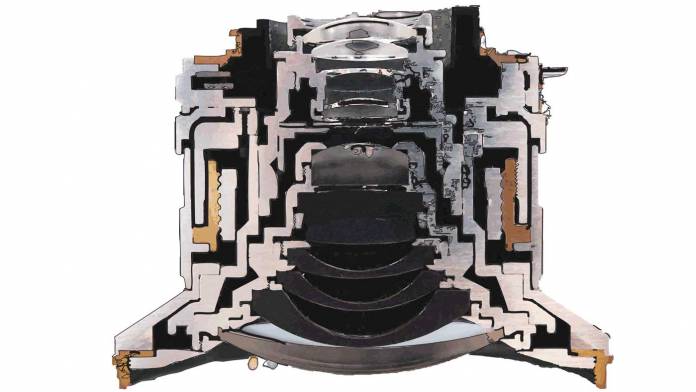 With makers such as Canon, Zeiss, Schneider, Rokinon, Leica and Tokina offering so many choices, it can be tough to narrow down your options by more than just price. By considering focal length, aperture, sharpness and other differences in lenses, you can get a better idea of how those looks are produced. This will help you find the right lenses for the work you want to do.

The iris of a lens controls its aperture. Aperture is an opening that controls the amount of light that enters the lens. The size of the aperture is measured in f-stops: the larger the opening of the iris, the smaller the f-stop. Typically, a lens’ largest iris opening is displayed on the body such as f2 or f3.5.

The maximum aperture of a lens is important because it determines how much light is let in to the camera. An aperture set at f2 will let in more light to the camera’s image sensor than being set at f4. The more light that hits the image sensor, the less you’ll have to make up with gain or ISO, therefore the less noise there will be in the video you shoot. A lens with a large maximum aperture can help you get better shots in low light.

Many lenses don’t produce very sharp images at their largest aperture setting; the aperture needs to be decreased in size a few stops for the image produced to be its sharpest. While a lens may have a maximum aperture of f2, it may produce its sharpest images between f5.6 and f8.

The size of the aperture of a lens also affects depth of field. The depth of field of a shot is the area from the nearest an object can be to the lens while in focus to the furthest an object can be from the lens while in focus: the larger the aperture of a lens, the smaller the depth of field. A big part of what is described as the “film look” is a small or shallow depth of field. This is where the subject in the mid-ground of a shot is in sharp focus and the background of the shot is blurred. The advantage to this type of shot is that the human eye is naturally drawn to the portion of the shot that is in focus.By considering focal length, aperture, sharpness and other differences in lenses, you can get a better idea of how certain looks are produced.

While prime lenses have fixed focal lengths and zoom lenses can be set to a range of focal lengths, this is not the only way in which they differ. Prime lenses require fewer elements (individual pieces of glass within the lens) and are often lighter than zoom lenses. Prime lenses also tend to have larger maximum apertures and often produce sharper images than zooms; however, zooms offer the flexibility of a lens that can be used at different focal lengths even in the same shot. You can’t zoom with a prime.

When shooting video, using a cinema lens is far different than using a still photography lens. While two lenses may both be 50mm f1.2 and optically be very similar, most cinema lenses are completely manual. They don’t have autofocus or image stabilization in the lens. Even the iris may need to be controlled manually by a ring on the lens.

Cinema lenses are often larger and a bit heavier than still lens of the same focal length. They have built in gears on the focus ring to work with a follow focus. The larger size of the lens makes it easier to pull focus. When manually controlling the iris on a still lens, you’ll notice that it clicks into place at the different aperture settings. A cinema lens doesn’t do this. The iris of a cinema lens moves smoothly from one aperture setting to the next, so you can go from f2.8 to f5.6 in one fluid motion.

Still photography lenses have a phenomenon called “breathe” when they are auto-focused. The breathe of a lens is a slight change in focal length when the lens is focused. When shooting stills it’s not much of an issue, but it can be quite distracting while shooting video. It can look like the camera has zoomed while focusing. Cinema lenses tend to have little-to-no breathe to them.

The markings on cinema lenses are also much larger than those on still lenses. These larger markings make it easier for camera crews to see what size lens is in use on a camera and what the focus and iris settings are. Sets of prime cinema lenses will all have the same thread size so that the same size add-ons, like filters and diopters, can be used for all the lenses in a set. You can expect to pay more for a cinema lens than a comparable photographic lens.

All lenses, to some extent, suffer from vignetting, distortion, loss of contrast and chromatic aberration. In some lenses these defects can be all but unnoticeable; in some they can be quite pronounced. Some of these so called “defects” can actually produce desired results. Cinematographers over the years have learned how to exploit these defects to help produce desired looks.

Vignetting can be as subtle as a slight darkening of the edges of the image a lens produces to as drastic as the edges of the image being completely black with only a circular image visible in the center. This severe vignetting occurs in lenses that do not match the size of the image sensor of your camera. With Canon lenses, if you have an EF-S lens it will only cover an APS-C (cropped image sensor) sized sensor; if you use an EF lens, it would cover an APS-C or a larger full frame sensor. However, an EF-S lens doesn’t cover enough area for a camera designed for an EF lens.

The human eye is naturally drawn to the area of an image that is brightest, so a slight darkening of the edges of your image caused by vignetting could help draw attention to the center of the frame. A subtle vignetting like this can also be fixed in post if desired. On many high end lenses, the vignetting is so slight it is all but unnoticeable.

Distortion in a lens causes straight lines to appear curved. This distortion is usually more drastic toward the edges of the image. While this can be a serious problem in a 50mm lens you plan on using for close-up shots, it can add a larger-than-life look to action shots taken with a 9mm wide angle (fisheye) lens. A small amount of edge-distortion, when added with vignetting, can give your shots a dreamy look.

This issue can also range from almost non-existent to very noticeable. The sharper the image a lens produces, the easier it is to focus. Your camera will be easier to operate with a lens that produces sharp images. However, a low-contrast image with very muted colors can be a very desirable look. There are those who will choose to shoot with older or cheaper lenses that aren’t as sharp to achieve this look as opposed to using filters or some other method of reducing contrast. Usually the sharper the lens, the more expensive it is but this is not always the case. This is where reading lens reviews, looking at test shots or doing your own evaluation will help.

When the lens causes a separation of colors — like looking at the image through a prism — these effects are called chromatic aberrations. The effects of this defect can vary from severe to unnoticeable. Like vignetting, it often is more visible near the edges of an image. However, unlike vignetting, chromatic aberrations are almost universally considered to be undesirable.

Finding the Lenses that Work for You

When looking at the characteristics of a lens and the types of images it produces, you need to consider the types of subjects you will shoot and how you want them to look. You’ll need to think about the environments you’ll be shooting in as well. Even the size of crew you work with will help determine the lenses you’ll want to use. So what type of shoots will you do?

If you’re a single-camera operator working in documentary style run-and-gun shoots, you’ll want a wide zoom like an 18-55mm or a 24-70mm as your primary lens. This will help you cover a wide range of focal lengths without having to stop to change lenses; likewise, the wide focal length will help you stay close to the action.

For scripted productions with multiple cameras and a larger crew, cinema prime lenses are a great help if you have room in your budget for them. The ability to use cinema follow focus and the ease of seeing the lens’ size and settings will speed up your work. The larger apertures available in prime lenses will also make it easier to achieve a shallow depth of field and maintain that film look.

If you’re shooting sports on a field or events on a stage where your camera is far away from your subjects, a large zoom like a 70-300mm or a 100-400mm will be the lens you use most. You’ll get nice, tight shots from a distance and still be able to cover action closer to you.

Jack of All Trades

An 18-200mm, 28-300mm or similar all-in-one zoom might be a good first choice. Combine that with a standard prime like a 35mm or 50mm and you’ll be ready for almost anything. Just remember that in most cases, a jack of all trades is a master of none.

By taking the time to understand the anatomy of a lens and how it affects your shots, you will gain greater control and mastery of your images. By pairing this knowledge with information about the type of shoots you’ll be doing and the looks you want to achieve, you’ll be on your way to finding the right lens or lenses for your next project.

Change Your Look, Without Changing Your Lens

Filters and other add-ons can change the way a lens looks and performs. It can be cheaper and easier than buying multiple lenses. You can find filters not only to correct for lighting like neutral density (ND) filters and polarizing filters, but you can also find some to make colors warmer or make the focus softer. Attaching a teleconverter to a lens decreases the minimum distance needed to focus the lens when you need to get closer to your subject. An X 0.5 add-on lens can change your wide angle lens like an 18mm into a fisheye. A 2X teleconverter (extender) will double your lens’ focal length. You’ll find that adding on to your lenses can help lighten your camera bag and keep your wallet fuller.