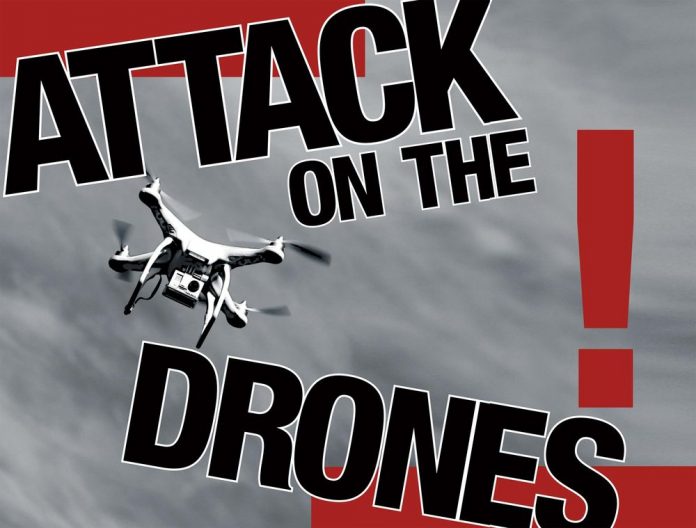 What is a Drone?

Strictly speaking, "drone" used to be defined as an autonomous aircraft. Now, the word is used as slang for anything without a human pilot on board. This can include anything from your local hobby store’s cheapest radio-controlled aircraft to a Predator or Global Hawk. What the rest of us call a drone, the FAA refers to as an unmanned aerial system or UAS.
Radio-controlled helicopters have been a pipe dream of videographers for decades. But until recently, cameras have been too heavy, or the use of video tape was too prohibitive to make it practical. Helicopters either couldn’t get off the ground, or tapes would be degaussed by the electromagnetic fields put out by the motors.
With the use of tapeless media, and the stability of multi-rotor systems, it’s now practical to have a relatively low-cost platform to shoot video from. The first commercial multi-rotor system was known as the “Draganflyer” back in 1998. Compare that with the DJI Phantom’s modern guidance and cameras … you have a very effective aerial system.
Drones have been used around the world for every purpose from inspecting oil pipelines and electrical lines, to surveillance, search and rescue, and even weapons delivery systems. Originally, even the Predator drone was designed to take pictures and replace the U-2 and the SR-71 spy planes. However, since the Predator has been outfitted with weapons delivery capabilities it has sparked protests, debates, and even hysteria over many types of drones.
So understandably, when the average person hears the word drone, they are filled with a feeling of uncertainty, and in some cases dread or fear.

Is it Legal to use a Drone to Shoot Video?

The short answer is both yes and no. There are many rules to flying an unmanned aerial system as presented by the Federation Aviation Administration. The most basic rules to follow (that should keep you safe, and the FAA off your case) are to keep your UAS in sight, never fly more than 400 feet above the ground (don’t fly within five miles of airports, and if you follow it everywhere, you’ll be pretty safe), never fly near people, and never fly where you can cause property damage. Basically, these are the same rules that you should follow when flying your standard hobby, electric, radio controlled aircraft.
You can fly any radio controlled aircraft with a camera on it. At least for now. There are currently 30 states attempting to outlaw radio-controlled aircraft with cameras on them. Where things really get dicey, is when flying a radio-controlled aircraft for commercial purposes (like shooting video).
According to Les Dorr (a spokesperson for the FAA out of Washington, D.C.) "…if you are taking video for your own personal use (including YouTube) and you're not going to do anything else with it, and you adhere to model aircraft guidelines, you're okay…" He continues, "…you cannot sell the video, and you cannot take money for shooting the video." Why? Because using unmanned aerial systems for commercial purposes is illegal.
So what about all of those drones that we saw at NAB last year? Well, in short they’re great for hobbyists. But you cannot (legally) make any money shooting video with a radio controlled aircraft. Again, at least for now.

Can I at Least Get a Permit?

The good news is, that in 2012, President Barack Obama mandated the FAA to open the skies to private commercial drones by 2015. The bad news is that at the soonest you might be able to get a permit at the end of 2013. Our FAA spokesperson said, "…proposed small unmanned aircraft rules (under 55 pounds) could be coming out later this year and will likely cover this (shooting video with small aircraft commercially)…" Of course he did follow that up with, "we can't really speculate how long it will take to get out the final rule." So in reality, it could be as late as September 2015 by the time you can legally shoot video (and accept money for it) with a radio-controlled aircraft.

There are permits available for unmanned aerial systems at this time. But not for profit, and not for shooting video. The current permits being issued are called "experimental airworthiness certificates”and are for (again from our FAA spokesperson) "… Demonstrations only."

And Then There are the States…

There are currently 30 states attempting to pass legislation against drones. Also, there are an additional seven states that have previously attempted to introduce such legislation but have ultimately failed. Since we're based in California, let's cover just a couple of points of California legislation.
There are currently two bills introduced. The first one is California Assembly Bill AB 1327. This bill covers how law enforcement, state, and federal agencies should be allowed to use drone technology. It also is designed to protect citizens’ privacy from being invaded by the government.
The second bill is the one you should pay attention to if you want to shoot video. This is California Senate Bill SB 15. The bill is being constantly revised, but as of December 3, 2012 it is designed to regulate, the use of remote-controlled aircraft with cameras mounted on board by private citizens for private or commercial use. (A small reminder, if you hire someone to shoot video for you, you are responsible for how this person shoots.)

But I’ve Invested a Ton of Money in my UAS!

Believe us, we sympathize. This author, has invested more than $20,000 in drone technology for shooting video. However, with the hysteria over drones the best advice we can give you is to ground it for now.
Even private citizens legally posting to YouTube are coming under scrutiny. The Kunde Family Estate (a family-owned vineyard) published video taken from a DJI quad-copter over their own vineyard on YouTube. In an article in the Press Democrat (a Santa Rosa, Calif. newspaper) called into question the flights’ legality. Furthermore, the paper quoted Lt. John Noland of the Santa Rosa Police Department mentioning "fly-by gang shootings" as crimes just around the corner. Needless to say, the hysteria surrounding the subject of drones requires more education and awareness.
This illustrates the prevailing attitudes and hysteria surrounding drones by both law enforcement and the general public. Also, it should tell you that you should not be surprised if you find a police officer tapping you on the shoulder (even if flying a multicopter as a hobbyist for personal enjoyment).

So What if I Take my Chances?

Well, until the previously mentioned bills become settled … all you're really subject to are fines. However those fines can be pretty steep. Our FAA spokesperson mentioned an incident that took place in October 2011 involving a group known as “Team BlackSheep.”
Team BlackSheep are fairly well known among radio control enthusiasts that gather footage of landmarks around the world using their radio-controlled multicopters. The incident that our FAA spokesperson is referring to was of the team flying their UAS on the University of Virginia campus. Our FAA spokesperson was not informed of the final fine amount, but told us that "a $10,000 fine was proposed."

So Where does This Leave Us?

The bottom line is that aerial video systems are still in a category of new technology that can be used for less than honorable purposes. As a result, the law hasn’t (yet) caught up with technology. After all, this author’s video system can be flown using a laptop with waypoints. What would stop someone from mounting an explosive rather than a camera? What would stop someone from surreptitiously flying it into the backyard of a celebrity's house in the hope of capturing scandalous footage? These are all legitimate questions for sure. But is the answer making it illegal for anyone (no matter the purpose) to use such technology? Should we be regulating potential, or behavior? These are questions for politicians, philosophers, pundits, and registered voters.
There is one thing for sure: for every purpose that a drone could potentially have, there is an opinion.
Ty Audronis is an editor, special effects guru, and consultant for studio technology. He has flown his multicopters and fixed-wing drones for several network shows, ads, and films. His drones’ current status: grounded.
[Sidebar]
DJI Response
Interview with Kate Blaising at DJI Innovations (a leader in private drone guidance systems, and the manufacturer of the Phantom quadcopter camera system):
Are you active in the legislation process regarding private drones?
“We are indeed active all aspects of assisting governmental bodies develop regulations for UAS use. We were recently very active in working directly with the Texas Legislature to help develop wording for bill 912 that passed through both the House and Senate – it is a perfect example of how States should regulate UAS use.”
Some government agencies are concerned about mounting guns on small drones. Is this even a possibility?
“The physics of this is just outright funny. Simply put, there is no reason to be concerned about putting a gun on a personal UAS. In order to weaponize a drone, you would have to look at military-grade estions [drones that] cost hundreds of thousands of dollars.”
Advertisement