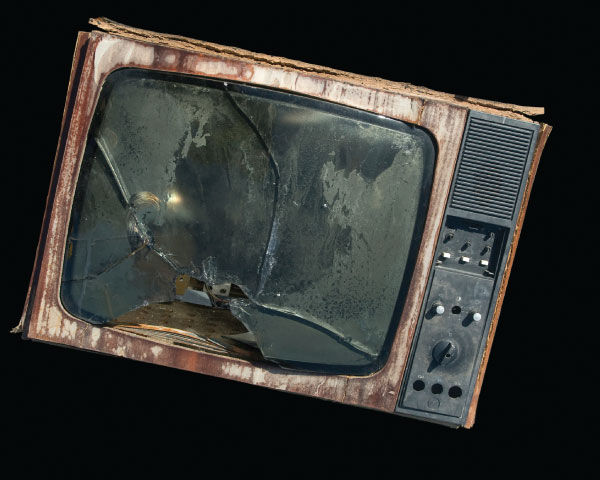 Television is dead. The disc is dead. Broadcasting…dead. Cable? Satellite? Blu-ray? Everything you grew up with in terms of mass multimedia is dead; it just doesn’t know it yet. Ten years ago, mass media meant multimillion-dollar corporations and networks. Granted, there were small advances in distribution in the decade, like DVD-Video and Blu-ray, but these were merely incremental changes; you still needed to transport a physical copy of your media to a compatible player. Today, anyone with a little spare time and a computer can make a movie that can reach an audience somewhere north of a billion people. That’s more than any network can hit. That’s more people than James Cameron could even dream of a decade ago. So a billion viewers is incredibly unlikely to happen without a surprised kitten, a groinshot and a babe or, preferably, all three at the same time, but the potential is there. And that potential reveals, with some clarity, the Future of Video.

The End of Standards

The first technical transformation that we’ve already seen is that the Dark Art of television broadcast standards, NTSC, ATSC, DLT to glass masters and other voodoo specs are history. Today, as we move forward through 2010, it’s all irrelevant. Physical distribution and the Age of Standards are dead. Sure, we still have some constraints, but think about it: you can upload your movie at 640×480 or 1080p or in a long narrow strip 1,000 pixels wide by 300 pixels tall if you want. The best format for your production today…is the one that you chose.

One thing that this author predicts will not be big in the next decade is 3D. Like jetpacks and flying cars, 3D has always been a fanciful future fad that has never taken off. The primary reason that is that 3D is a gimmick. Why do we obsess over clarity, resolution and color and then ruin those three characteristics with 3D? Yeah, 3D is fun (I sure like it), but it doesn’t look as good as 2D. And didn’t we all just buy new thousand-dollar digital televisions last year? Didn’t the TV we grew up with cost $300 and last 20 years? So do I really need a new TV already? Hum.

The history of camera technology, for example, reveals a direct and unmistakable future: SD to HD to 4K; smaller sensors to larger ones; film to tape to Flash memory; expensive to, well, less expensive; 4:3 to 16:9 to…cinematic aspect ratios. Look for digital anamorphic processes on 1920×1080 pixel image sensors and anamorphic glass in the immediate future. If you think 16:9 widescreen is cool, imagine true Academy Aspect camcorders, first at the professional level and then for us consumers. The marketeers convinced us that we needed 24p, they’ve made Depth of Field mandatory for True Artists and there’s no reason to think that they won’t convince us we need real movie screen aspect gear. Plus, this will give manufacturers an opportunity to sell us new television sets, which will drive the technology forward, whether consumers demand it or not. 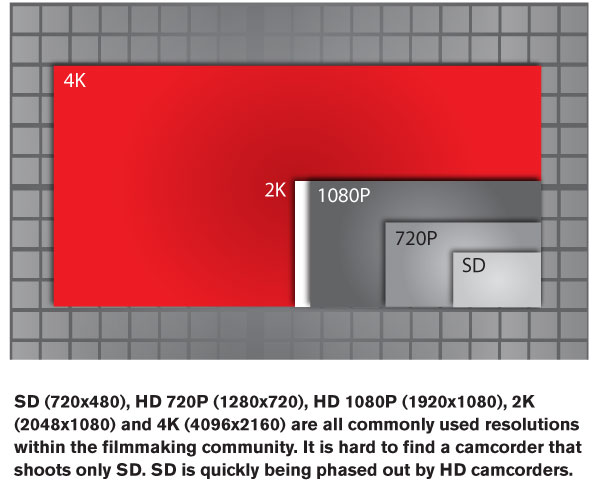 It’s impossible to talk about distribution without at least mentioning production. At the high end, we’ll see better cameras, of course, and a likely merger of DSLR 35mm-sized imaging chips with proper video cameras with standardized lens mounts. Prices will start at $10k, but entry-level professional models will rapidly be introduced under $3,000. Of course, the most radical shift in production is at the other end of the price spectrum. While GooTube is chockfull of crappy, poorly-lit, handheld consumer videos, literally a million a day, it doesn’t have to be that way. Today, for less than $200, you can get a camera that can, potentially, outshoot what we might have considered “broadcast-quality” video a decade ago. Now, given that broadcast quality was always a marketing catchphrase that no one ever defined, that’s a pretty easy claim to make, but I think the key here is “potentially.” Give me some lights, a tripod, a $200 camera, a little talent and a whole lotta hard work, and I’ll give you a television show that is better than at least half of the programs that are running on cable right this moment. Seriously. This is the biggest revolution of the next decade.

In terms of editing, I see one clear trend, and that is an expansion of the role of the editor from that of the gal that cuts a movie together (no small artistic task, it should be noted) into a number of highly-specialized tasks that includes color grading, compositing and motion graphics. Of course, we’ve already seen this shift on-screen, but I think “editing” software will also follow suit. After Effects (or an app like it) is the future, and the more traditional editing-only apps like Final Cut Pro are on their way out. Will Adobe make After Effects more linearly friendly? Will Apple extend its software into the motion graphics realm more comprehensively? Will Avid (which still rules the roost in Hollywood) return to dominance as the platform of choice across the board? Who knows? I do know that if you don’t know motion graphics today, the kids will call you “grandpa” in 2020. 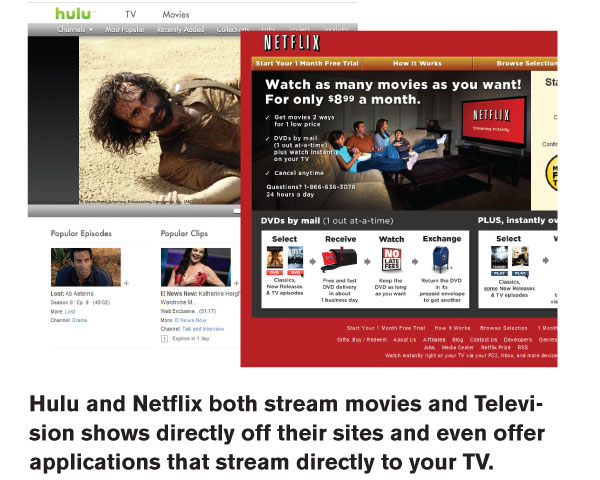 While I provocatively opened this piece announcing the Death of Distribution as we know it, the sober truth is that the internet has already killed television and Blu-ray. Why would you want to wait until Tuesday night at 8pm to watch your favorite show, when you can watch it anytime after the release date? Why would you even bother to DVR a local copy of a show if you could just access it anytime you want from Hulu? And, since it is clear from services like Hulu and Netflix (and bittorrent) that there are zero technological barriers to simple, comprehensive video on demand, then the only reason why we don’t have simple, comprehensive video on demand today is… money.

Personally, I can’t wait until the traditional distribution business is killed off by the internet. The current TV distribution model is a dinosaur. Instead of paying for 287 channels you never watch, we’ll be able to watch what we want to watch, when we want to watch it. How much will it cost consumers? The movie-rental kiosks of redbox answer that question: $1 a movie or show. Traditional television networks, studios and cable/satellite distributors should really be in a panic over this and realize that we, the audience, want to pay for quality content and don’t mind advertisers, but when we can get better service for less money on the internet, well, we will. 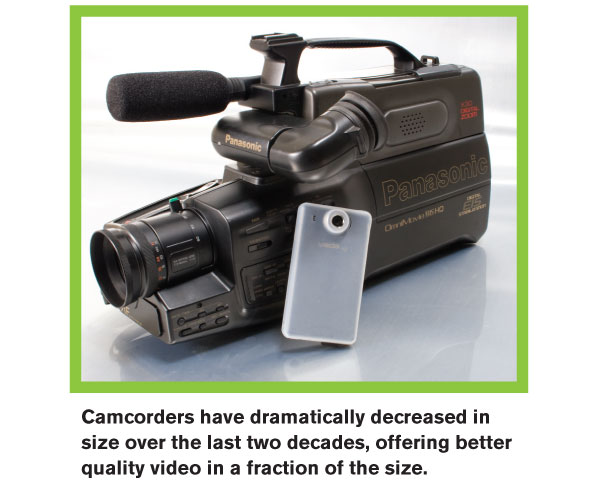 Instead, I predict “the Industry” will continue to offer 287 cable channels we’ll never watch for $100 a month, and the media will be locked up with increasingly draconian DRM (digital rights management) schemes that make movies more and more difficult to play on – well – whatever device you bought last year. None of it will be compatible, it’ll get more and more frustrating to watch what you want and it’ll get more and more expensive. Of course, you will always be able to pirate a very standardized, universally-compatible version of that media you want. For free. As long as pirated content is better than what you can pay for, people will continue to pirate content. I’m not suggesting you should do this but, it has to be admitted that even if you wanted to give Sony a buck for the movie you want to watch, Sony won’t take your money anyway. This is not a winning business model.

The more things change, the more the fundamentals remain the same and, whether the old network dinosaurs figure it out or not, the people definitely get it. So the upside to all of this is, overall, we are living in a Golden Age, where talented producers and professionals will produce more and better content than we’ve ever seen before. Sure, there will still be a lot of crap, but, as Gene Roddenberry once remarked, “90% of everything is crap.” Cinematographers and lighting designers will continue to paint with light and evoke immersive audio atmospheres. And we humans will continue doing what we have done for many, many generations, with and without 7.1 3D HD Cinemascope DSLR cameras: we will tell stories. Don’t let technology get in the way of your story. Bottom line – whatever piece of gear you choose to use to tell that story, whether it’s the newest techno contraption ever or whether you’ve held onto your old S-VHS camcorder for decades, if you know how to tell a story with video, the tools just embellish the rose.