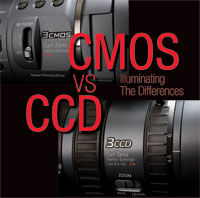 The great film directors know that they’re really not in the business of photographing actors-they’re in the business of recording light. Eventually, by the 1960s and 70s, they began to capitalize on this, occasionally shooting right into the lights on their sets, which became a trademark for directors such as Stanley Kubrick and Steven Spielberg.

CCD stands for charge-coupled device; CMOS stands for complimentary metal-oxide semiconductor. These are the chips onto which the light captured by a camcorder’s lens is focused. Those signals are processed further inside the camcorder and ultimately, the image is recorded to the camcorder’s storage medium, whether it’s tape, DVD, or an internal or external hard drive. Cameras with multiple image sensors use one chip per light primary color (red, green and blue), and utilize a separate image processor to combine the three signals into a color video image. Newer and cheaper CMOS chips bundle both an image sensor and image processor into a single chip. All CCD designs utilize an image processor that is separate from the actual light-capturing sensor.

The first big difference between the two is that CMOS chips are manufactured much like traditional microchips, whereas CCDs, utilizing technology that dates back to a 1969 invention by Bell Labs, use their own proprietary manufacturing process.

To understand their roles in recording video, it helps to flash back to a century-old technology, the film-based movie camera. On a film camera, once an image passes through its lens and aperture, it records onto a strip of plastic film containing light- and color-sensitive chemicals for later development. On a video camera, a CMOS or CCD image sensor translates the image from the lens to whatever digital medium the particular camcorder uses.

Because of their origins in the computer chip industry, CMOS chips are cheaper to manufacture. But in general, a camcorder equipped with separate CCDs will produce a better quality image with less electronic noise than a single CMOS chip.

Advances in manufacturing technology are reducing the quality differences between the two image sensor types. But before either type of chip can work its magic and electronically capture a picture, the image has to get there. Let’s take a few moments to analyze its signal chain.

As most videographers know, proper illumination is essential both for aesthetics and to minimize video noise. Whether it’s the sun, “God’s 10,000,000 kilowatt light,” as Titanic director James Cameron once dubbed it, or a simple bank of quartz lights, the lighting on your set or location enters the interior of the video camera through the glass of the lens, (or the plastic of the lens, on some lower-grade consumer cameras).

The size of a camcorder’s lens impacts its performance. Many of the small consumer-grade camcorders on the floor of your local big-box electronics store have remarkably tiny lenses. This can impact their ability to perform in low-light situations: a larger-diameter lens will capture more light than a smaller lens. The general miniaturization of many consumer camcorders also explains the emphasis on CMOS chips, as CCDs typically consume much more power. Using CMOS helps consumer camcorders use smaller, but longer-lasting batteries, helping to keep the size down.

Once the light moves beyond the glass of the lens, it first hits the camcorder’s aperture, and then its shutter – if it has one. Although a few higher-end CCD camcorders have mechanical shutters just as film cameras do, most consumer camcorders do not. CMOS chips electronically determine exposure length.

The number of pixels on an image sensor impacts its performance in terms of resolution in general, and in more specialized applications, such as low-light shooting. Ultimately, pixel count will increase as the quality – and price – of the camcorder increases. But at least this is something that you can easily compare.

Another area where CCD-based designs provide more flexibility than their CMOS cousins is their ability to control gain. Professional camcorders often have an external gain control switch to adjust the sensitivity of the CCD, to help boost the input or throttle back video noise as appropriate. For typical usage, it’s best to adjust the exposure with the aperture and shutter speed rather than the electronic gain control. However, there are times when increased sensitivity – and the inherent increase in noise – is the trade-off to getting a usable shot, particularly in low-light, run-and-gun conditions when the lesser video quality and graininess might be accepted.

Image sensors only detect and record the intensity of the light hitting them, recording the grayscale image; they don’t actually record in color themselves. In a single-chip camcorder design, a color filter array sits on top of the image sensor. Somewhere between the surface upon which light hits the image sensor and the encoded output of the image processor, the color is extracted in accordance with the pattern of the tiny color filters. The data stream passes through the codec utilized by the camcorder (generally DV, MPEG-2 or AVCHD) to be compressed before it’s recorded to whatever media the camcorder is using, be it tape, a hard drive, a disc, a memory card, a network connection, etc.

In the case of higher-end camcorders with multiple image sensors, each sensor captures a single primary light color via a prism inside the camera. The prism splits the light entering the camcorder’s lens into red, green and blue and then sends those colors off to the matching image sensor, where the intensity of each color is encoded. The need for the three individual sensors, one for each primary color, is yet another reason why 3-chip pro cameras are more expensive than consumer-grade cameras.

Regardless of whether you have a small CMOS-based camcorder with a single image sensor, or a 3-CCD pro unit with a separate and complex high-end image processor, these chips do a whole lot of work that used to be done by many mechanical parts and a lot of chemicals in film-camera days. But they are not without their own problems.

No, that’s not the name of a rollicking martial arts film, but it does highlight some of the trade-offs of each technology.

To build on our analogy at the beginning of the article, shooting directly into overexposed bright lights with a CCD camera can result in smearing-which often manifests itself as glaringly obvious vertical streaks, very different from the way that lights bloom when photographed using film.

Most CMOS cameras use a rolling electronic shutter to capture an image sequentially in thin rows from top to bottom in the course of a single frame. This is in contrast to the more traditional global shutter of the CCD camera, where the sensor captures an image in its entirety.

The CMOS camera’s rolling shutter can impose a different type of distortion: skew. This can cause distortion of the vertical lines in a shot during a quick pan. (Picture a whip pan shot of a New York skyscraper, for an extreme example.) But for those who primarily shoot weddings or news-gathering talking-heads footage, neither of these issues will occur very frequently. However, action-oriented videographers, take heed.

Choosing between CMOS and CCD is only one element among many that must be considered when shopping for a new video camera. The size of the lens and whether or not the camcorder accepts interchangeable lenses for wide angle, telephoto, macro and other specialized applications is another. Is the camera equipped with XLR inputs for use with professional mics? Do those XLR inputs provide phantom power for clip-on lavalier mics? How flexible are the camcorder’s controls, for those times when you don’t wish to run the camera in automatic mode?

As with any professional equipment, from musical instruments to microscopes, poor technique will produce bad results, even if you are using the most expensive camcorder. Conversely, good technique can produce acceptable – sometimes even great – images on even the most inexpensive consumer cameras.

So should you choose CCD over CMOS? We asked Hahn Choi, who is one of the behind-the-camera talents at the streaming HD video web startup PJTV.com (where, in full disclosure, I am an occasional on-air talent). Choi said, “When it comes to quality, my personal opinion is that it doesn’t make a difference, because of compression that’s being used with most HD cameras. Whether it’s HDV or AVCHD, it’s still compression, and that’ll affect the video quality. With the processing cameras do, too, it’s tough to say one is better than the other.” However, although many higher-end manufacturers, including Red Digital Cinema, are beginning to use CMOS chips, if you can afford it, 3-CCD is the way to go. This is especially true if your material is ultimately designed to make its way to broadcast TV.

But so much material is being shot these days for the web, for video aggregation sites such as YouTube and as blogs and big media websites go multimedia. If that’s the case, given the factors Choi mentioned, a good CMOS camcorder will suffice for many purposes.