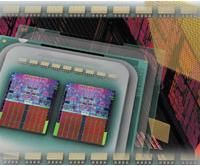 The migration to the next generation of computer hardware is happening already, albeit somewhat quietly.

While computer processor speeds have increased dramatically over the years, the maximum amount of RAM has remained stagnant. And as anyone in this industry knows, software used for video production and other related multimedia fields needs a lot of memory to perform comfortably. In 32-bit PCs, the maximum amount of RAM tops out at four gigs; while in Apple’s widely used Power Mac G4 32-bit computer (built 1999-2004), you’re maxed out at two gigs.

In computing terms, a bit is a binary digit. It’s the smallest increment of data that a computer processes. In the late 1970s, computer chips processed eight bits of information per operation; beginning in the mid-1980s, 32-bit computing eventually became virtually ubiquitous.

64-bit computing quietly began to arrive around 2003. After a few false starts by various industry players, that was the year that AMD’s AMD64 chip architecture arrived, quickly followed by Intel’s equivalent Intel 64 technology. A 64-bit version of Windows XP has been available since mid-2005, and Windows Vista will ship in both 32- and 64-bit versions. Apple will be using Intel’s 64-bit technology to power its soon-to-arrive OS X 10.5 ‘Leopard’ platform.

At a minimum, 64-bit computing promises buckets and buckets more RAM than 32-bit computing, whose standards were set in the 1960s and seventies, back when four gigs of RAM must have seemed like an astronomical amount.

The current 64-bit computing architecture allows for a whopping 128 gigabytes of RAM in Windows, and the theoretical maximum is an absolutely astounding 17,179,869,184 gigabytes, or 16 exabytes.

Soundtrack scoring will be one area that will be radically affected by 64-bit computing. Boston-based Cakewalk (www.cakewalk.com) is already selling a 64-bit version of Windows-based Sonar, its flagship hard disk recording platform.

A video released by Cakewalk (available on YouTube) demonstrates the 64-bit version of Sonar in action. The clip shows Hollywood soundtrack composer Shawn Clement (Buffy The Vampire Slayer, Ally McBeal, and many, many videogame soundtracks) using Sonar and a whopping 150 audio tracks, 17 separate real-time software synthesizers, and 42 simultaneous real-time plug-in audio effects (such as digital delay and reverb), along with synchronized video playback. The end result is a John Williams-style orchestrated score entirely composed and recorded on one computer, accompanying a video clip of a high-speed aerial combat scene. That many audio tracks and software synths playing in 32-bit Windows with its limited RAM would require the vast majority of those MIDI tracks to be “frozen,” that is, mixed down to audio and its accompanying synthesizers turned off. This makes last-minute changes and tweaks in the score that much more difficult to accomplish.

Video production also benefits from 64-bit computing. A few years ago, Jerome Rota, the creator of DivX, the popular MPEG-4 codec, was quoted as saying, “It’s very important to use the maximum potential of a CPU when you process compressed digital media.” He says, “You cannot afford to be inefficient when you have to encode a hundred thousand frames. Any inefficiencies might make it take ten times longer and, for us, it’s just not worth taking the chance. 64-bit technology is the next logical step for us.”

Beyond those factors, most of us have built up a collection of favorite hardware, such as video and audio cards. RealTek, NVIDIA and ATI have come out with at least beta 64-bit versions of their drivers. But not all card manufacturers have upgraded yet. If that’s the case, Steve Thomas of Cakewalk says, “You may need to maintain a dual-boot system until such drivers are available.” (Shades of the early days of Windows 2000 and XP.)

Then there’s ancillary software — all those programs such as Microsoft Word to write the scripts, Outlook for email, and Quicken or Quickbooks to keep track of cash flow. Will existing copies of those programs work in 64-bit? Generally, yes. 64-bit processors can process 32-bit programs, but not vice versa.

These programs, along with your favorite editing and production suites, should all perform faster with lots more RAM. Of course, the real power of 64-bit computing is, and will be, in applications designed to put 64-bit’s new architecture to work, but these are arriving slowly, as developers await the inevitable rollout of Vista. Currently, besides the aforementioned Sonar, other applications available in 64-bit mode include NewTek’s LightWave 3-D graphics/animation application and their VT[4] integrated production suite.

As for 64-bit versions of programs such as Adob’s Photoshop and Premiere Elements, Photoshop co-designer Scott Byer wrote in December 2006 that such versions are coming. “It’s a when, not an if.” This accurately sums up whether or not you’ll be impacted by the 64-bit computing yourself: it’s all just a matter of when. Steve Thomas estimates that “within a year or so,” 64-bit computing will be the norm.