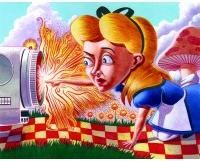 “Let’s pretend the glass has got all soft like gauze, so that we can get through. Why, it’s turning into a sort of mist now, I declare! It’ll be easy enough to get through.”

With these words, Lewis Carroll’s Alice begins a journey of wonder and amazement that still fascinates generations of readers. In the spirit of Through the Looking Glass, we can use our imaginations to go through the lens of our camcorder and look at the world inside. Rather than just having a fanciful adventure, we will look around and see how our camcorder works. Watch your step Alice, some things are different on the other side.

The View from Above
“I should see the garden far better,” said Alice to herself , “if I could get to the top of that hill.” Our trip will also be easier if we start with a good overview. A camcorder performs several functions; capturing images, recording them to tape and playing them back on our televisions. An array of knobs and buttons allow us to control it all. The part of the camcorder that images the light is the camera and the part that records and plays back the sound and images is the recorder: CAM(era) (re)CORDER. We can also divide the controls into camera controls and recorder controls.

Through the Glass and Upside Down
Rather than flipping things left to right the way a mirror does, our camcorder lens actually turns the world upside down. Figure 1 illustrates how the lens inverts our world when we pass through the lens.A convex lens bends light as it passes through it. The bent rays cross and create an inverted image on a flat surface positioned behind the lens. For any given lens, image size and subject distance, there will be some distance between the lens and the image it creates that will result in a sharp or in-focus image. The focal length of a lens is the distance from the center of the lens to the focal point. A longer focal length produces greater magnification. A shorter focal length produces a wider angle of view (Figure 2). Our camcorder uses a compound lens, which is a group of lenses. This combination of lenses allows us to vary the focal length, which is how an optical zoom works. While the optics might be complex, the idea is always the same, to focus light onto a flat surface to produce an image.

Don’t Trip Over the Iris
Now we are not really going into Alice’s garden, so when I warn you about tripping over the iris, I am not talking about a flower. Because we want to be able to make images under a wide variety of lighting conditions, we have to control the amount of light that enters our camera. In our cameras, as in our eyes, an iris or aperture opens and closes to control the amount of light that enters the camera. Figure 3 shows a typical iris.

Transforming the Image
As we pass through the lens of the camcorder, we can clearly see the image projected on the image sensor. The image sensor is tiny and has a rather irregular surface. Most camcorders use a single sensor, or CCD, to capture images, though professional camcorders and some high-end consumer camcorders use one CCD for each of the primary colors for a total of three. The CCD is actually composed of an array of sensor elements, each of which builds up an electrical charge when illuminated. The CCD gathers light for a period of time, builds a charge and then dumps the information about the strength of that charger out as data. The camcorder interprets that data and stores it to tape or uses it to reproduce a picture on the LCD screen.

In a conventional film camera, the camera shutter determines the length of time during which light is allowed to enter a camera, but video cameras don’t actually have shutters. Instead, the amount of time the CCD is allowed to charge determines the exposure. (See the sidebar, Where is the Shutter?) Figure 4 shows how a CCD collects charges at various points, and sends the charge values out for further processing and recording.

The Other Half of the Camcorder World
The camera converts light into electrical charges that in turn became the data that we use to recreate the scene on our televisions, but that data must be processed, stored, and recovered if it is to be of any use.

The CCD actually produces far more data than we can handle or store. A DV image consists of an array of picture elements (pixels) that is 720 pixels wide and 480 pixels tall. That is a total of 345,600 pixels and each pixel is represented by 24-bits of data or three bytes per pixel. That is just over 1-million pixels per frame and our frame rate is 30 frames per second. This gives a total raw data rate of over 30 million bytes per second, which is more than we want or need to record. DV tape recorders can record digital data at a rate of around 4.5 million bytes per second, so before recording, the camera will have to do a substantial amount of digital processing.

While the details of video data sampling and compression can be complex, the basic ideas are simple. Redundant data is eliminated, small details that the eye is unlikely to detect are removed, data is grouped into efficient blocks instead individual pixels and color is averaged. The compression algorithm tries to throw out anything that isn’t needed to produce a good image and, for the most part, these software tricks work extremely well. They are not perfect however, which is why we sometimes see compression artifacts in digital video. Still, the technical and visual tradeoffs are well worth the price in terms of storage efficiency and not overwhelming our computer editing machines.

Recording the Data
Once the camcorder compresses data, we are ready to record it onto magnetic tape. Discrete electrical signals change the polarity and amplitude of magnetic particles on the tape. In the case of video, these signals represent the digitally compressed data that ultimately corresponds to the electrical charges that built up on the CCD in response to the light focused on it by the lens. The changes the recording head makes to the magnetic particles are fairly permanent, if left undisturbed.

Data does not simply flow horizontally, right to left, across the tape, which is not the most efficient way of storing information on the tape. Instead the record head spins, which, combined with the motion of the tape, produces a helical pattern. The magnetic tape wraps around a drum as it moves along slowly, while the recording heads simultaneously spin around the surface of the drum. This paints stripes of magnetic data on the tape at a very high rate of speed, even though the tape itself is moving relatively slowly (Figure 5).

Recovering the Images
Playing back the video is simply a reversal of the recording process, with some additional processing to convert the pixel-based digital images into a format suitable for our analog televisions. The analog signal goes out to the viewfinder or the LCD or out through the RCA video or S-video jacks to an external destinations, such as mixers, recorders and monitors.

Looking Glass Creatures
We’ve had only a brief tour through our camcorder looking glass, but hopefully it’s made more sense than Wonderland appeared to Alice. To the Looking Glass world it was Alice that (might have) said, “I’ve a camcorder in hand, I’ve a crown on my head; Let the Looking Glass creatures, whatever they be, Come and dine with the Red Queen, the White Queen, and the CCD.”

Charles P. Bloodworth is a video hobbyist and has a degree in computer science.

SIDEBAR:
Where is the shutter?
You may be wondering how a camcorder can have a high-speed shutter, if it doesn’t actually have a shutter. Conventional film cameras use a shutter to block the light at all times except for the period during which the film is exposed to light. The shutter controls the amount of time that light strikes the film, letting in more or less light to obtain the correct exposure. Camcorders use a CCD rather than film and the sensor is effectively turned on and off to control the amount of time a charge builds. This has the same effect as a physical shutter, so we still call it a shutter, even though it is only a virtual shutter.