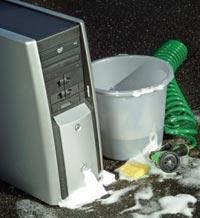 Although you wiped the dust from your monitor and used industrial cleaner to get the finger grease off the keyboard, your computer could still be quite filthy. We’re talking about the programs and files inside your computer. Keeping those neat and organized is even more important than making the outside spic-and-span.

Updates
Why would you want a clean machine? When things are well organized, the computer is not bogged down with information, which makes it run faster. A machine that isn’t well organized may cause certain programs to not work properly or can force the whole computer to crash, losing all that hard work you haven’t yet saved. When I started my video production company a few years ago, I bought a nice new apple Macintosh G4 with a DVD burner inside. I also bought a brand new printer. The computer worked great except the DVD burner program wouldn’t open. I called Apple and found out the printer driver was interfering with the DVD burner program. I downloaded a driver update and, like magic, my well-organized machine worked perfectly.

Simple Organization
Finding projects, video clips, files and folders is much easier on a clean machine. Not being able to find a project when you want to is almost as annoying as losing your keys when you’re late for work.

You also save dozens of gigabytes of hard drive space when your computer is well organized. It’s amazing how quickly video will eat up hard drive space. My first editing computer had 80 GB of storage. I thought it would be more than enough to handle my video. But I learned that it was impossible to work on more than two projects at the same time. I bought another 120 gig hard drive, but still have to maintain a clean machine or the memory would be filled within a matter of days.

In a nutshell, having a clean machine saves you time, money and your sanity. So now, the big question is how do you get your machine clean?

Disc Maintenance
It may take a long time to clean your machine. The amount time depends on how much junk you have on your computer. If you are a pack rat, you could have files stacked up to the rafters, but if you’re a neat freak, your computer is probably already somewhat organized. In any case, a planned maintenance schedule is a great idea, with perhaps an hour allocated to the task.

One good way to get old junk off your computer is to burn old projects to CD or DVD and then delete them off your hard disk. Clearly, it’ll be tough to fit your video projects on CD, but DVD can be a pragmatic solution. Many professional editors export their video to Mini DV tape and then delete the video files on their computer. If you have carefully logged your project and save your batch capture list, it isn’t too difficult to recapture the clips and restore your project if needed later.

Names and numbers
Think about how you are going to organize your machine before you start the process. If you are primarily editing family vacations, a good system is to save them by year and date. Wedding videographers may want to save the projects under the bride’s last name, for example. Commercial production houses can use the name of the client. If you are doing different types of projects, create different folders for each. Name everything including video clips, CD labels and video sequences starting with that same name.

Pre-edit, Batch Capture and Recapture
An hour of DV footage will take up about 13 GB. Instead of just capturing an entire tape to your disc, you can use your editor’s batch capture feature to pre-edit your project before it even hits the hard disk. We’d recommend capturing a few seconds around the shot you want, just to give yourself a little room in the edit (you did roll a little tape before and after your shot, right?).

When you are done with the project, you should throw away the render files that you don’t need anymore. It’s still a good idea to keep your project files. The project itself takes up very little hard disk space and you can always recapture the video from your project’s batch list.

Background Tasks
Now that you have made your desktop and your hard drives as clean as a whistle, let’s get down on our knees and clean the floor, open up the drawers and see what’s in there. You need to get rid of the hidden mess as well. Our first task is to remove startups from the machine. Startups are programs that automatically open when you turn on your computer and keep on running in the background, perhaps without your knowledge.

These programs use up memory and steal clock-cycles from your processor. Start-ups can often cause problems with editing programs as you capture video, since they might momentarily interrupt what needs to be a continuous process. It’s usually not a big deal if a background process interrupts a word processor for a millionth of a second, but such an interruption might cause a capture application to drop a frame or two or worse.

Here is a simple way to get rid of startups. Press Ctrl+Alt+Delete on a Windows machine and look in the Task Manager to see what programs are running. On a Mac (OS X at least), go into the Applications folder, then open the Utilities folder and run the Activity Monitor. Some of the programs you find will be necessary and intentional, but you might be surprised to find some strange programs running. You can end the tasks at this point, but it would be better to track them down and change their options so they don’t run at startup or you should uninstall them if they aren’t necessary. Watch out especially for anti-Virus software. While you may want to run this software when you are on the Internet, it can interfere with delicate video operations. There is another reason for you to get a dedicated video machine that does not connect to the Internet.

The Virus Dilemma
If you do use your editing computer for e-mail and the Internet, you will have to watch out for viruses and clean the spyware from your computer. Just like you or I can catch a cold, the flu or even more serious viruses, your computer can get sick, slowing it down or even killing it. With computers, the viruses come in the form of code that infects your computer. These buggers are almost impossible to find and kill, so there is special software you can buy to detect viruses. Norton and PC-cillin are both popular titles of anti-virus software. The downside to using anti-virus programs, is that they run as startups. We just talked about how startups can slow or disrupt your editing. If you’re not using your editing computer for the Internet, or using disks from other computers, you may not need the anti-virus programs at all.

There are also annoying unwanted mini-programs called spyware that allow people to use your modem, DSL or cable connection to spy on you a bit. It isn’t anything as nefarious as violating your right to privacy, but the software does popup ads occasionally and may track your Internet behavior, which is then used for marketing purposes. It isn’t entirely evil: sometimes, when you download a free piece of software, the price is really a small piece of spyware that generates income for the developer. Still, spyware, adware and malware can be bad and it certainly can interfere with video editing. Ad-aware from Lavasoft and Spychecker are good programs that get rid of spyware.

Clean Machine
Now that you have a clean machine, nothing can stop you from creating the best videos of all time. Not only that, all your friends will envy you. They will want to know how you maintain such a clean, well-organized, healthy computer that is reliable as the rising sun.

Brian Schaller is a TV news shooter, reporter and producer and owns a video production company in Northern California.

[Sidebar: Dedicated Machine]
In a perfect world, you’d have a dedicated editing machine. Despite marketing claims to the contrary, you really don’t need a super fast computer for word processing, e-mail or the Internet. You can also pick up some nasty viruses on the Internet, so if your editing computer is your bread-and-butter, keeping it virus-free is really not an option. Many people can go into their garages and dig their old computer out. Or you could ask your friends if they have an old computer sitting around. On the Web, you can find companies that sell used computers at low prices. Use your spiffy new fast machine for editing, and dedicate that old processor for e-mail.