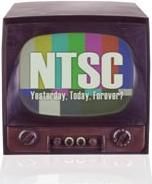 Understanding the concepts that drive the technologies we use always provides a powerful advantage for both professional and hobbyist videographers. Part of this understanding involves exploring the standards around which these technologies developed. In 1953, the National Television Systems Committee (NTSC) developed the United States standard for broadcast television, which remains the standard used today throughout North America.

In Living Color
The NTSC standard moved us from the gray lands of black and white images into the modern world of color television. With this transition arose certain obstacles associated with a video signal that not only had to include and transmit color information, but which also had to be backwards compatible with existing black and white televisions. To achieve this result, a color video signal begins just like a black and white signal. An eight-cycle sine wave that generates the color burst is then added to the signal.

Modern color televisions use red, green and blue (RGB) colors to create the full rainbow we see. The most common and economical types of televisions on the market are cathode ray tube (CRT) televisions that create color images by shooting beams of electrons onto colored phosphors, which are simply compounds that emit light when they’re struck by electrons. A layer of phosphor dots coat the (inside) face of a television’s picture tube and, as an electron beam traces lines across the picture screen, the phosphors glow and create the images you see as motion picture.

Considering just the differences in color performance, you should always preview your computer-edited projects on an NTSC television and use NTSC-safe colors in your editing software (if you can specify this with a filter). Most systems have built-in NTSC palettes to help you determine these colors automatically. It won’t be a disaster if you don’t, but you might be surprised by the differences.

If the voltage is too high in areas, they appear as over-exposed white blobs. Voltage signals that approach zero appear completely black. Waveform monitors measure voltage levels in a range of up to 100 percent. Typically, face tones are approximately within the 70 percent range, while slightly detailed white areas are 90 to 100 percent and shadowed areas are under 30 percent. The total range or contrast ratio determines how detailed the picture can be. The definition of exactly what is black and what is white can be very important in calibrating camera, broadcast and viewing equipment.

Perfect Timing
In addition to luminance, there was another practical reason why the black and white video signal was included in the NTSC video standard: obsolescence. You might think that keeping up with technology is a modern problem, evidenced by the rapid obsolescence of the computer you bought just two years ago. But even black and white television was new in 1953, and it was expensive, and the NTSC couldn’t very well abandon it.

So the engineers developed a way to use the existing black and white signal with the color signal layered into it. To do this without causing interference problems, they chose a frame rate of 29.97 frames per second. However, adjusting the frame rate created synchronization problems. Although three frames in 3,000 seems rather trivial, this figure adds up to a timing error that accumulates over time to over three seconds every hour. This is a very noticeable delay.

Enter drop-frame video. NTSC drop-frame video counts frames a little strangely in order to maintain accurate timing. No actual frames of video are actually dropped in this process, despite the name, however, and 29.97 SMPTE drop-frame time code is only a numbering system. In terms of actual renumbering, this adds up to 108 frames of video each hour. Getting to 108 is not easy. Two frames each minute adds up to a total of 120 frames over the course of an hour, which is 12 frames too many. If you skip every tenth minute of video (2 frames per minute X 6 ten-minute intervals in and hour), this leaves the correct number of 108 frames adjusted each hour.

Turning Progressive
Another moving picture problem is flicker. Since a movie is nothing more than a series of static images played successively, the gaps in between images create a flickering effect. Movies in the theaters and video on television can both suffer from this problem.

Video flickers 30 times a second (30 Hz). An NTSC video frame consists of 525 horizontal scan lines. Engineers took every other frame line and split them out of the video signal into two fields. Interlaced scanning divides the scan lines into upper (odd) and lower (even) fields, and the electron gun makes a separate pass over the entire screen twice for each field. The gun scans alternate lines which then interlace to form a frame. Since it requires two passes to draw a single frame of an image, the field rate of interlaced video is double the frame rate: 30 frames per second equals 60 fields per second.

Digital video created for computer monitors doesn’t use interlacing. Instead, these images appear from top to bottom in a single pass over the screen. Non-interlaced or progressive scan monitors scan every line in order, although their refresh rate (i.e. flicker) is much faster than 30 Hz. For best results in the edit bay, it’s ideal to preview interlaced video on an interlaced NTSC monitor and progressive scan video on a VGA computer monitor.

Goodbye NTSC, Hello ATSC
The next generation television standard is here and NTSC will soon be a technical curiosity of the past. As in 1953, however, we’ll still be dealing with older technology for some time to come. One of the leading international organizations helping pave the way for a digital standard is the Advanced Television Systems Committee (ATSC). Formed in 1982 by organizations such as the Electronics Industry Association (EIA), the Institute of Electrical and Electronic Engineers (IEEE), the National Association of Broadcasters (NAB), the National Cable Television Association (NCTA) and the Society of Motion Picture and Television Engineers (SMPTE), the ATSC is a remarkable standards body. There are approximately 140 members representing the broadcast, broadcast equipment, consumer electronics, computer, cable, satellite, motion picture and semiconductor industries.

The ATSC hopes to create a standard that will encompass many forms of digital media, such as digital television, interactive systems and broadband multimedia communications. The goal is to cover everything, from audio to video, from standard definition (SD) to high definition (HD) and all the way to new specifications for good old NTSC.

It could be years before another standard replaces the NTSC signal. Digital broadcast signals are already saturating many parts of the country and will rapidly spread. There is a definite parallel with the arrival of digital television and the introduction of color television. As more cable companies and networks move towards digital programming, the dreams of a digital future, and a new standard, will become a reality.

The Magic of Making Movies really isn’t as “magical” as those outside of the industry believe.