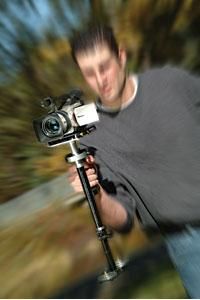 The first step on the path from amateur to professional is to put the camera down! Weekend warriors use camera supports only when forced to, whereas the pros are exactly the opposite, going hand-held only when no better camera support will work. The reason is that old devil frame: that rigid border around the picture exaggerates image wiggles and jiggles, reminding viewers that they’re not looking at real life, but only at a succession of pictures.

By now, most everybody knows that camera support means tripods, stabilizers, dollies and booms. Each type has its pros and cons and all of them cost enough that small producers probably won’t want to spring for all of them. Understanding these camera caryatids will, however, help you pick the right one for the job.

By far, the most frequently used camcorder support is a tripod. We explain tripod ins and outs in the August 2003 issue of Videomaker, so let’s focus on how to use them here.

A tripod is an absolute must for your production kit. If you’re buying a new tripod (and if all you have is a Box-Mart special, you should) pay at least enough to get three essential characteristics: stability, smooth panning and a leveling head. Above all, the unit should be stable. A tripod is worthless if it quakes like an aspen leaf. On less pricey models, sacrifice light weight, if you have to, in exchange for a unit as inert as a boulder. Next, insist on smooth panning and tilting, with adjustable drag to fine-tune movement resistance. Finally, get a unit with a leveling head, so you don’t have to futz with the leg lengths in order to get a flat platform.

Tripods last so long that you should over-buy for your present needs. After all, they’ll be able to lay that tripod in your grave someday, along with your broadsword and shield.

As a rule, use a tripod every single time you make a shot from a fixed spot. Learning to operate one takes only a few minutes. First, aim the front leg at the middle of the scene, so that you can stand between the other two legs. For panning, face the center of the pan, twist your upper body to frame the start of the shot, and move with the pan so that you’re twisted the other way at the end. If possible, change the angle and length of the panning handle so that you can get closer to the rotating tripod head. When tilting, hold the external monitor with your left hand, pivoting it to compensate for the camera movement, so that you always have a clear view of the frame.

Always rehearse a move before making the shot. Adjust the drag controls so that the pan head resists your effort enough to keep the move creamy-smooth, but without binding and jerking. This is another reason for a hefty tripod: too much drag can actually torque the legs of a lightweight model, ruining the shot.

Two more quick tips: a pan head camera move should graph as a shallow bell curve, accelerating from the start to the middle of the move and then decelerating to a stop at the end. Finally, make sure to preset good compositions for both the start and finish of the pan. A strong ending composition delivers the satisfying feeling that the camera has arrived somewhere important.

Without camera stabilizers, The West Wing would have to shut down production. These engineering marvels permit hand-held shots that look almost like dolly work. Until, that is, the camera makes three right-angle turns, goes through four doors and runs down a flight of steps.

Stabilizers are like powerful editing software: they deliver every capability you could think of and more, but their learning curve can be daunting to all but dedicated users. That’s why Hollywood camera stabilizer operators are usually freelance specialists who make only stabilizer shots.

To start with, you have to set up your rig so that it balances and operates smoothly. This involves counter-weighting the camera, angling the external view screen, and adjusting all the sophisticated tackle that connects the operator to the rig without transferring the jiggles occasioned by walking. If you spring for a top-line model, your Rube Goldberg contraption will stay in balance for a considerable time. Many consumer rigs seem to need constant fiddling.

Then there’s the skill required to operate the rig. You not only have to frame the subject while both of you are making complicated moves, but you may also have to pull focus and zoom while doing all this. This means shlepping a lot of weight around and larger stabilizers must actually be worn, rather than carried. On big production shoots, you’ll see short, inch-thick pins clamped upright near the sets so that the camera stabilizer rig can be detached from the operator and hung up. In short, stabilizers permit breathtakingly long and fluid moves, but don’t expect to unpack your new beauty and start ballet dancing.

One more point: although simple stabilizers for lightweight camcorders are no more expensive than comparable tripods, the rigs required for professional-size cameras can run into the tens of thousands of dollars.

Nothing says "major production" like the sight of a dolly festooned with camera, lights, operator and focus-puller, gliding majestically along on rails smooth enough for a high-speed train. The types of dollies that you can use vary so much that some can be packed in a couple of canvas bags (track and all) while others need a truck with a lift-gate to carry. Even so, dollies come in two basic flavors: floor models and track models. Floor types roll on pneumatic tires that are smooth and silent. They are versatile because they can be readily steered. A crab dolly can turn all four wheels up to 90 degrees and change direction completely in the middle of a shot.

Track dollies use flanged wheels that mate to proprietary rails. On the one hand, they take much longer to set up because you have to build them like toy train layouts. On the other hand, they permit ice-rink smoothness across all kinds of lumpy terrain outdoors. The tracks also make it easy to repeat moves (for additional takes) with micrometer precision.

Why use a dolly rather than a stabilizer rig? First, dollies are well suited to longer takes that include passages without movement. Secondly, a dolly can make a push in (or pull out) so slowly that the audience never notices it. This is a great technique for intensifying a performance. Though the process is invisible, the performer grows gradually larger and more important in the frame.

On the down side, dollies are expensive to buy or rent and are time-consuming to prepare for shooting. They also require larger crews to operate and plenty of rehearsal time.

What about the wheeled three-armed spreaders that turn tripods into dollies? Unless they’re exceptionally expensive and heavy, they’re too jerky for moving shots, even on studio floors. In reality, they’re just convenient ways to move tripods from one setup to the next and the wheels are not used during shooting.

Look at footage from a rock concert or an awards show and you’ll see camera booms in all their glory, sweeping above the action, not to mention around, below and through it. These shots all use a boom, jib or crane of one kind or another. The most common type of camera boom balances the camera on one end with counter-weights on the other, and the entire arm rests on a pedestal. The operator can, while watching a monitor, pan, tilt, focus and zoom the camera by remote control. In sophisticated models, the camera and the boom both pan and tilt synchronously, all while the boom cranes up and down. Mount it on a dolly and you really have some serious movement choices.

The most gee-whiz models can cost you up to six figures, but shorter, simpler types can be surprisingly affordable. Because they’re clumsy and time-consuming to transport and prep, booms are generally reserved for more ambitious productions or for studios in which they can remain set up. They can also weigh quite a lot and take up a significant amount of space as well.

Should you consider a camera boom? Yes, if you make music videos or commercials that require hot-dog camera moves. They’re also heaven-sent when you have to shoot in (and over) crowds. Even if the camera doesn’t fly all over the place, just hoisting it six feet above everybody else while panning and tilting to follow the action can deliver shots from the perfect point of view. We have colleagues who get jobs just because the word is out on the street that they own a boom. Have you ever seen a local car commercial that didn’t use a boom? Besides, operating a boom-mounted camera is more fun than playing computer games.

Because it’s not a separate accessory, we haven’t included optical or electronic lens stabilization. Lens stabilization can work astonishingly well, as long as you remember a few simple rules:

You should, however, experiment with the stabilization enabled while on a tripod. Some units work very well that way, even smoothing out small glitches in the tripod movements.