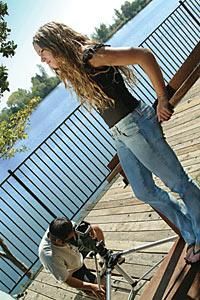 Whether a program is fiction, documentary, corporate promotion, or any other genre, it should have a professional style — a style created largely by camera angles. We’ve visited camera angles before (for convenience, the gist of several articles we’ve done on the subject is very briefly reprised in the nearby sidebars). This time around, we’ll see how you choose camera angles to enhance the type of program you’re shooting. We’ll look at story videos, documentary and news shows, commercials and music videos, and corporate and training programs.

But first, some fine print. Remember the old gag, "No generalization is worth anything — including this one!" For every description that follows, you’ll probably think of exceptions and contradictions. That’s alright, because these lists of video genres and their shot types are nothing more than guidelines — things to think about as you plan a shoot.

In general, story programs stick to moderate angles because they don’t call attention to themselves. When skillfully edited, unobtrusive camera work allows viewers to feel they’re observing real life, rather than just watching a movie. This is especially true of comedy, which generally avoids big closeups (except for inserts) and maintains a neutral attitude toward the shenanigans onscreen.

Dramas are similar, except that they feature tighter angles to increase emotional intensity and off-level setups to create uneasy feelings in the audience. Action pictures also use a lot of dutch (canted) angles, especially in combination with wide angle lenses. The tilted verticals seem to fall forward and the deep wide-angle perspective increases the punch of fights and chase scenes, especially when movement is toward the camera or away from it.

Story programs do use unusual angles, but usually for effect. A sudden birdseye view or extreme closeup can startle the audience and punctuate important action. The trick is to save these punchy setups for key moments, so they don’t lose power from over-use.

Nonfiction videos typically include documentaries, news features shot in the field, and sports. All nonfiction forms share the problem of credibility: the camera should appear to be a mere recording device that captures reality, even though you can’t help changing reality by what you choose to record as well as what you frame — and what you frame off. To enhance the feeling of neutrality, camera angles tend to be, well, neutral, favoring setups from long shot to loose closeup and avoiding extreme wide angle, telephoto and off-level views.

These rules extend to interviews, and the talking heads featured so prominently in documentaries. Subject sizes range from medium shot to closeup and angle shifts from shot to shot are strong enough for easy cutting, but not extreme enough to call attention to themselves.

Instead of saying, "This is real life," some documentaries insist, "this is not real life; it’s a movie about real life." In this extreme "verite" style, the rules are all reversed. Extreme focal lengths, dutch angles, and shock cuts (say, from extreme long shot to extreme closeup) continually remind viewers that they are watching a movie rather than looking through a window on real life. Available light, lens flares and shaky camera moves, all no-nos in conventional productions, enhance the feeling.

News features shot in the field follow similar rules. Again, the objective is to transmit an impression of reality without calling attention to video techniques. On-camera reporters are covered in 3/4 or medium shots (loose closeups at night so there’s less subject to light). Of course, breaking action is shot from whatever angles the camera person can get — often with long telephoto lenses that keep the operator out of the traffic, the riot or the gun fire. These shots can appear detached and uninvolved in the action.

Sports videography has similar problems with angles and lenses. To keep off the playing field, videographers use long shots or extreme telephoto lenses, both of which call attention to the shooting process. For variety, directors get closer angles on coaches and players on the bench, plus cutaways of the spectators in the stands.

There’s a paradox here. These setups may call attention to the shooting process, but audiences are now so used to them that they actually help convince viewers that the events shown are real. For that reason, some fictional sports programs will use sports-reporting setups, even when their cameras could operate right in the middle of the action.

Angles for Commercials and Music Videos

Commercials and music videos share several characteristics. They usually make no effort to conceal shooting or editing techniques. In fact, they seek extreme angles and lenses because bravura movie making is part of the show. Finally, all this gee-whiz videography doesn’t wear the viewer out because it never lasts more than a few minutes or, for commercials, 60 seconds.

As far as angles go, commercials demand extreme care and discipline. In a message that may last as little as ten seconds, every single setup must convey a maximum of information in a minimum amount of time. That means finding the absolute best point of view and lens for each and every shot. All-in-all, commercials may have the most consistently beautiful images of all the genres we’re covering.

Music videos combine the aural music on the sound track with the visual music of the shots and cutting. As far as angles go, there are no rules for this genre, except that the images should be as striking as possible. (Obviously, we’re exempting programs that merely display the singer and/or group.) To match the songs, the images may sometimes be far from "beautiful," but they usually show that they’re carefully designed. It is precisely this "designed" look that sets music videos (and commercials) apart from fiction and documentary programs, which want to avoid looking contrived.

Special-purpose videos include programs for corporations, schools, churches, and community organizations, as well as training videos made to convey specific knowledge or skills.

In most cases, these shows stick to the moderate angles and neutral viewpoints of documentaries (which they pretend to be, even though they aren’t). When these programs resemble commercials: say, to introduce a product or polish the image of an energetic, forward-looking company, then they adopt a commercial style, with the dynamic angles and lenses you’d expect to find in a car ad.

Training videos share the commercials’ need to show precisely the right thing at the right time from the right angle. All training programs rely on inserts to deliver essential details, and videos about school or factory bench-top operations tend toward very large subject sizes, achieved with telephoto lenses, so that the videographer can stay out of the action and the lighting on it.

So there’s a flying survey of the ways in which different video genres tend to use camera angles. Don’t forget: no generalization is worth anything.

Angles may also be described by their: