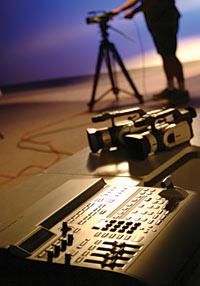 If you videotape events with multiple cameras, you can save time in post-production by doing live-to-tape multi-camera shoots. Graduations, dance recitals and sports are prime targets for a multi-cam shoots, but switching live to tape takes careful planning and special tools. This article will tell you what you need to know to pull it off.

Set Up, Power up

Scout the location ahead of time. This will tell you how long your cable runs will need to be and determine where you’ll place cameras and your mixing table. Make sure you get to your location early enough to set up and test everything out.

After your gear is unloaded at the location, place the tripods where you want them. Most setups will use the triangle method (Figure 1). This consists of a wide angle camera set up to the rear of the event and two cameras set up close to the action on opposite sides. However, there is no fast and steady rule for camera placement. You’ll have to make the call on camera placement based on how you want to tell your story.

Next, run the necessary cables and cords to your mixing table. Let’s start with power. If your event is long it’s best to run direct current rather than batteries. Bring an extension cord for each camera.

While all camcorders have composite video outputs, they are not the best choice for long cable runs. When you select composite as your input your signal-to-noise ratio (a rating of picture quality) goes from 62db for S-VHS input (pretty good) to about 54db for composite (not so good).

Some mixers now accept FireWire cables, allowing you to switch the highest quality signal possible. DV cables can now be purchased in lengths up to 150 feet (50 meters).

Whatever cabling you use, make sure you maintain the ends and avoid heavy footed patrons and camera-people from stepping on them as they can become damaged.

Unless you and your crew are telepathic, you’ll need to have communication from the mixing table to each camera position. There are a number of suppliers that offer communications units that include cables, headphones and a "comm box" in a variety of configurations. You can even get wireless. Two-way, hands-free wireless communications headsets are available at Radio Shack. Though designed for bicyclists, they work well for communicating with a camera crew.

The mixing table is where you make all the magic happen. The first requirement is a table and you may need to take your own with you. A folding table about six feet long will suffice. Here’s how we recommend setting it up.

Position your output monitor on the extreme left. To its right, place the preview monitor. Centered in front of the monitors is your video mixer. To the right of the preview monitor sit your record decks. We recommend bringing a second (stacked on top) to record a back up. To the right of the record decks are the audio mixer and an optional titler.

After you set up your table, it’s time to cable your cameras to your video mixer. Most mixers come with four inputs. It’s wise to match the position of your cameras with inputs 1, 2 and 3, from left to right, with your wide shot in input 2. This makes it easy to quickly identify each camera with its button on the mixer. You should wire your mixer the same way every time you set it up, so that you, and your helpers, won’t have to re-learn the switcher each time.

Connect a video cable into the output of your video mixer and connect it to the input on your primary record deck. Take another video cable and put it into the output of your primary record deck and connect it to the input of your output monitor (Figure 3). If you’re using a back up deck, simply connect your secondary deck to an additional output from your video mixer (most have two outputs). It’s important that you monitor the signal from your record deck, not from the mixer, to ensure you’re getting a clear signal on the tape.

Next, take a video cable and connect it to preview output on your video mixer. Run the other end into your preview monitor. If you want to (or need to) use a preview monitor for each camera, your configuration will change slightly.

Matching your camcorders is not always easy. Start by white balancing every camera (manually of course) on the same card, in the same position. Next, light balance using your output monitor as your guide. A light balance is done by having all your cameras set on an object or person prior to the event under full lighting and matching each camera by adjusting the iris so you’re not too hot or too dark. Select two of your cameras and perform a half-wife in the mixer so you can compare them on the screen. Adjust your exposure settings until the cameras match as closely as possible, then use the half-wipe to match the third camera to one of the other two.

Don’t forget to put tapes in your record deck(s). It’s a good idea to also roll tape in each camcorder. The extra footage can be edited in later if it is necessary to cover an accidental bobble.

If you choose to add titles on the fly you’ll need to cable in a titler. You can cable your titler to input four on your video mixer, but the best configuration may be to pass the mixed output of your mixer through the titler. This will allow you to key titles over shots from any of your cameras, and even switch shots underneath your graphics. The output of the titler runs to the record deck.

Talk Before You Tape

Before you roll tape, you need to let your crew know what you expect. Make sure that you are all on the same page before the event starts. The time for questions from your crew is ahead of the event and not during. Every multi-cam event is different. Recording football for your local cable station is different than shooting a dance recital, and markedly different from shooting a jazz concert. If you and your crew are new to multi-cam shooting, you can do a great deal of training by getting there ahead of time and doing a dry run before your event starts. Talking with your crew ahead of time will make both you and them feel more confident and will help ensure a successful shoot.

Don’t forget to tape your cables down. Duct tape is okay in some places, but it can leave a gooey residue. Use gaffer’s tape if you can get it. Make sure you run all your cable and cords first before you tape down. Remember, safety before the shot. Never leave cable runs exposed. Someone might trip on your cable and disable one (or more) of your cameras. Another tip is to use commercial rugs to cover cables runs in high traffic area.