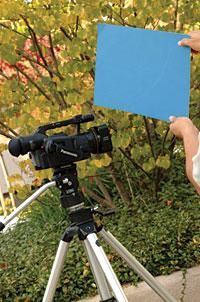 Even though your editing software offers hundreds of digital video effects (DVE), you may want to create your own scene transitions with your camcorder and simple editing. Why bypass all those nifty flips, flops and fly-ins? To build unique effects, fine-tune emphasis, reinforce continuity, avoid conventional transitions – or maybe just to make your audience say, "Hey, cool!" So let’s survey some home-made transitions and then look at what you can do with them.


A transition, of course, is a visual signal to viewers that one part of a program is ending and the next part is starting. Fades, dissolves and wipes are traditionally the most popular transitions, and contemporary practice adds just about any DVE your software can deploy. If you prefer to create your own custom transitions, then your three basic choices wil include camera techniques, faux opticals and matching shots.

The most common camera-built transitions are focus pulls and swish pans. In a swish pan (which has several alternate names like "flick pan") the camera ends the last shot of a sequence by suddenly panning 60, 90, even 180 degrees, so quickly that the scene turns into a complete blur. The first shot of the following sequence starts with a similar rapid pan that ends framing its subject. Cut together, the effect looks like a single lightening pan from one image to the next. (For more on swish pans, see the Swish Pan sidebar.)


A focus pull uses a similar editing technique, but the effect is achieved by manually throwing the end of the outgoing shot out of focus and then starting the next shot out of focus and gradually making it sharp. This effect is very useful for indicating a flashback in the story. Like swish pans, focus pulls work best when the outgoing and incoming shots are dissolved (cross-faded) together to blend them.

Before optical printers allowed transitions to be created in film laboratories, cinematographers had to make them directly in the camera. In video, creating a fade out is better handled digitally in editing than by manually closing down the lens (or the opposite with a fade in) A manual fade, however, is always slightly irregular, giving it a funky, old-timey look, so you might want to experiment with it. (If your lens iris doesn’t shut completely, crank it down to its smallest opening, then cover the lens with a black card.)


You can also do an in-camera color wipe. To do this, position a large colored card far enough away so that its edge looks fairly sharp, but close enough to fill the frame. End the shot by moving the card horizontally into position, gradually replacing the image. In the opening shot of the next sequence, start with the same card covering the lens, then pull it out of frame to reveal the scene. Make sure the card travels at the same speed and in the same direction. Dissolved together in post, the effect is a color that wipes across the screen, covering one image and then uncovering another image.


The effect is even spiffier with a large, monochromatic subject – say a white panel truck. In the outgoing shot, the truck drives through the shot, briefly filling the frame. In the incoming shot, it repeats the process. By cutting the shots together where the truck fills the frame in each, you make the truck wipe from one location to another. For a variant of this effect, have a performer walk toward the camera for an extreme close up. Then have the same character start with an extreme close up with a reverse angle in the new scene and then walk away to reveal the scene. When it’s all cut together, the shots make the character walk "through" the camera and out the "other side.

Another way to pair two shots is by matching their composition or motion. If, for example, the outgoing shot is a closeup of the round setting sun, you can cut to a lightbulb matched in size and position, to begin the night sequence that follows. In general, the goal is to find or create shapes, colors or overall compositions that are very similar. Then experiment with them: sometimes you can connect them with a straight cut; occasionally, other situations call for a dissolve.


Matching movement works equally well. If the camera is panning, tilting or dollying at the end of the outgoing shot, start the incoming shot with the same movement, preserving the speed and direction as much as possible.


Alternately, you can match subject movement. If you want to condense a walk across town to a brief montage, cut together a series of shots in which the subject is always moving in the same screen direction and at the same speed. Incidentally, this is a place where you do want jump cuts: keep the subject size, camera height and camera horizontal position the same in every shot.

How to Use Them

We’ve already suggested some uses for home-grown transitions. They avoid the cold, digital quality of computer-generated effects and require intentional planning and thought, which is a good thing. In matching compositions or movements, camera transitions strengthen the continuity by smoothing the changes from one sequence to the next sequence.


Camera transitions are also useful for controlling emphasis. A swish pan, for instance, emphasizes the change with a very in-your-face announcement that a new sequence is starting. A focus pull or color wipe is more neutral: they announce the switch without making a big deal out of it. Finally, matched composition or movement can actually de-emphasize a transition by carrying the same flow from shot to shot.


Finally, there is that gee-whiz effect. When a man’s bald dome morphs into a beach ball, the effect is comical. When that white truck goes by, teleporting instantly between two different locales, there can be an almost spooky feeling, as if the driver had gone into the Twilight Zone. More subtly, the persistence of compositional or color elements from one shot to the next suggests a purposeful design or an artistic quality to the whole enterprise. And no matter how down-to-earth you are about making your videos, you really are an artist, now aren’t you?

[Sidebar: Swish Pan Techniques]
As we’ve noted, a swish pan is a horizontal camera move so fast that the image is just a blur whipping past. The start of the pan ends the last shot of the outgoing scene and the effect ends with the first shot of the incoming scene. There are three ways to create swish pans, in order of increasing effectiveness (as well as increasing difficulty).