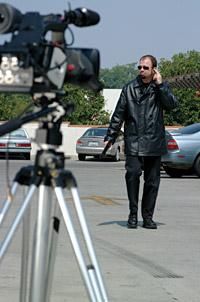 Say you just directed a scene that showed most of subjects A and B, and now it’s time for a closer angle on A. But how close? Medium shot, medium closeup, closeup, big closeup? Neutral angle or high or low? Three-quarter or profile? Maybe an over-the-shoulder two-shot? How do you choose among all these options?

Well-chosen camera angles deliver information, create impact, facilitate editing and enhance actor performance. Since we’ve recently covered those functions (What’s Your Angle, March 2002), let’s look more closely at the tools available to fulfill them. Those tools include subject size, horizontal position, vertical position, lens focal length and camera level. How you wield these tools in combination will determine the style of your program and its emotional effect on your viewers.

By far, the most powerful tool is subject size: how much of your subject fills how much of your frame (usually gauged in terms of a standing person). In a long shot, the person is in the middle distance, with plenty of room overhead and below the feet. In full shot, the person fills the frame from head to foot. A medium shot covers waist up and a classic closeup frames head, neck and just a touch of shoulder. (Subject size has further divisions. For instance, a close shot may be a medium closeup, a closeup, a big or tight closeup or an extreme closeup.)

Long shots are for context. We all remember John Ford’s tiny wagon trains dwarfed by the vastness of Monument Valley or a gnat-size Omar Sharif riding out of a mirage in Lawrence of Arabia. Long shots literally show us the big picture, revealing who and what is in it and the spatial relationships among them.

Emotionally, distant shots are often, well, distant: detached, observing calmly from the sidelines. They can create tension, however, when they withhold details of tiny subjects that viewers desperately want to examine. In the classic film version of Henry James’ Turn of the Screw (released as "The Innocents"), we can just make out an indistinct human figure on the far side of a lake. Is it a ghost? We can’t see enough to tell. Though photographed in cheerful sunshine, the shot’s as creepy as a crypt at midnight.

Midrange angles (full shot to medium closeup) tend to be inconspicuous because they model typical human perspectives. When you want the video camera to be invisible framing just a window on the actual world mid-range setups are the ticket.

Close shots tend to be intense. Moving in on a subject enhances its importance. The bigger a subject is in the frame, the closer viewers pay attention. Very close angles often do the acting for the performer. In the golden oldie, A Fistful of Dollars, ultra-tight closeups of Clint Eastwood tell us he’s planning big surprises for the bad guys, even though his face is perfectly expressionless.

Too many constricted frames can produce claustrophobia in viewers which is great inside a sub like Das Boot, but not as a general rule. It’s usually better to range between three-quarter two-shots (knee-to-head) and normal closeup shots, saving the really tight stuff for special emphasis.

Horizontal position is the lateral perspective on your subject. The classic angles are front, three-quarter, profile, three-quarter rear and rear.

Horizontal position helps you control apparent depth. Profile shots are flat, whether a distant car traveling parallel to the camera or a subject walking across a room. This makes profile shots useful in conjunction with long lenses (more on that in a moment). Together, they allow you to paint action on the plane of the screen, delivering a studied, formal effect.

Three-quarter shots, both front and rear, have just the opposite effect: they enhance depth by letting subjects move toward or away from the camera. In general, three-quarter setups also tend to produce diagonal lines from inside walls, buildings and streets, which enhance depth and contribute a dynamic quality to your compositions. In conjunction with wide-angle lenses, which exaggerate apparent depth, three-quarter views are great for action: fights, chases and the like.

Of course, front and rear angles also enhance depth with moving subjects, but they send other signals as well. Though subjects shouldn’t look into the lens (except as spokespersons), front angles lend a "presentational" quality to setups. By contrast, rear angles – especially on people – are closed off from viewers. We naturally want to see faces. Denied access to them by rear angles, we’re frustrated and intrigued. Rear angles are often used to tease the audience by saying "this is someone worth showing you, but you can’t see the person yet.

Vertical position is the height of the camcorder in relation to the subject: bird’s-eye, high, medium, low and worm’s-eye vertical angles are common, again, with more choices in between.

Bird’s-eye and high angles lend a feeling of detachment, of being literally above it all. Functionally, they’re invaluable for orienting viewers to complicated action because they function as maps of the shooting environment.

As you might expect, neutral angles are inconspicuous because they approximate the usual human viewpoint. Though we frequently look up and down, we spend much of our time gazing more or less straight ahead.

Low angles have two main purposes. They approximate the points of view of diminutive subjects like children and pets. They also enhance feelings of movement in three-quarter and front shots because the subject seems to be overrunning the camera.

Finally, high and low angles are emotionally important in framing people. High angles look down on subjects, making them weaker and less important. Low angles have the opposite effect: they increase power and importance. In making corporate videos, it’s good practice to shoot VIPs from slightly below eye level.

Lens focal length is the angle of view and subject magnification delivered by each setting, from wide angle through telephoto. From any one position, a wide-angle lens encompasses a broad field of view full of small subjects and a telephoto shows a narrow angle with far larger subjects. A normal setting approximates the characteristics of the human eye.

Because focal lengths are usually positions on a continuously variable zoom lens, the spectrum here is the subtlest of all. In fact, the gradation is so continuous that who’s to say exactly when a wide-angle lens becomes a normal lens or when a normal lens morphs into a telephoto lens?

As usual, "normal" lens settings are unobtrusive because their images look like what we see in real life. So let’s get right to the world of wide-angle and telephoto lenses.

As you know, wide-angle lenses seem to exaggerate depth, so that subjects in the rear are smaller than they would be in normal perspective. For the same reason, those subjects grow rapidly as they approach the camera, making them seem to move faster. Everything about wide angle shouts speed, power and excitement.

Telephoto lenses reduce apparent depth. This effect is great for camera tricks. Miniatures in the foreground can be aligned with distant scenery so they look full-size. Cars speeding across the screen can "just barely miss" cars headed at them toward the camera, because the very long lens reduces the apparent distance between the two, concealing the fact that there was really a big, safe gap between them.

Camera level is another factor that can carry a big emotional load. Normally, cameras are kept carefully level, so that horizontal lines and horizons are parallel to the top and bottom of the frame. But artists have known for centuries that horizontal lines feel static and vertical lines are almost as quiet. Diagonals, by contrast, feel active and dynamic because, psychologically, tilted objects won’t stay put; they’re falling over. Seen in real life, the Tower of Pisa is one very scary building!

To capitalize on this psychological effect, you can purposely set the camera off level, automatically turning every horizontal or vertical line into a dynamic diagonal. Also, because "falling" is an unsettling experience, off-level setups can add a subtly queasy, creepy feeling to a shot. Notice how often directors tend to use these creepy angles in horror flicks.

Off-level setups are called "Dutch" angles because they were popularized by German (Deutsch) directors imported to Hollywood in the 1920s.

Once out of fashion, Dutch angles are now all over commercials and music videos, just to jazz everything up a bit. That’s too bad, because any technique loses its punch when it’s used to death.

How to make a movie: A guide to your first production