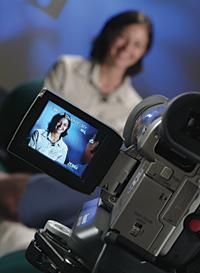 Interviews are the most common form of nonfiction television; and with just a little practice, you can adapt this cheap and versatile format to your corporate, school, church, club, community and family programs. Most studio interviews aim one camcorder at the subject and the other at the reporter, providing A- and B-roll footage for easy editing, often in real time.

What’s that? You say you don’t have two camcorders? Here’s a secret: neither do the pros. Location interviews generally use a single camera.

Making one camera look like two is surprisingly easy, as long as you know a few tricks and plan your approach before you shoot. Let’s look at the production side of shooting a two-person/one-camera interview. We’re not concerned with documentary-style interviews in which the questioner never appears, and we don’t care about how to ask penetrating questions and such. Today’s chalk talk is strictly about production nuts and bolts. We’ll start with what you need to achieve and how you plan to do it. Then we’ll walk through setting up your camera, lights and mike and wrap it all up with procedures for taping an interview that your editor will love.

When producing a location interview, you have three basic objectives. First, you want a single camcorder to do the work of two. Next, you want the edited program to look as if it’s unfolding in real time, just like a multi-camera studio shoot. Finally, you want to provide the editor with the content and the coverage required to cut together a seamless sequence. Here’s a strategy for achieving these goals.

The idea is to shoot the interview from several different camera setups. Typically, these setups include:

Figures 1 through 4 diagram these setups, and we’ll frequently refer to these drawings.

In shooting this way, the trick is to avoid losing the flow of the interview by stopping it to change camera setups. For this reason, the majority of the conversation takes place as shown in Figures 2 and 3, because these setups require no change in the positions of camera, lighting and microphone.

Before looking at this procedure in detail, let’s run over the equipment employed and the four basic setups.

Of course, you’ll have a camcorder on a tripod. (Because interview subjects don’t move much, they give away even the best hand-held camera work.) Today, almost all camcorders come with external LCD viewing screens, which are indispensable for framing subjects during long takes. Ironically, the finest three-chip Mini DV camcorders sometimes lack these screens, so you may need an external reference monitor.

For high-quality sound, an external microphone is equally essential. If you’re stuck with your built-in mike, consult the Tips for Camcorder Setups sidebar on setup guidelines for suggestions of how to use it to your advantage. A lapel mike (wired or wireless) works well, or you can mount a cardioid or shotgun mike to a table-top stand and place it close to the speaker and just below the frame line. Headphones are an absolute must, both for monitoring voice quality and for detecting any interfering background noises.

When optimized for the subject, all these mikes will also record the reporter’s questions adequately for documentation, though not well enough for use in the finished audio. Shotgun mikes work very well because they have secondary pickup areas behind and to the sides of them. They’re also good for minimizing extraneous background sounds found in noisy environments.

On the other hand, an omnidirectional stand mike can record both participants well enough for use in the program (assuming they’re close together), which is a big help if you don’t want to re-record every one of the reporter’s questions and comments.

The most versatile location interview light kits have at least four units: key light, fill light, rim (hair) light and background light. At the other extreme, the simplest may have just one soft key light and maybe a large sheet of white foamcore board for reflected fill. We’ll compromise with a two-light setup: a spotlight with spun-glass diffusion clipped to its barn doors and a large, soft fill light either an umbrella style or a softbox type.

Now let’s deploy our hardware. Figure 1 shows the shot that establishes both participants. Notice several things about this setup:

Figure 2 is a closeup of the subject, with the reporter’s shoulder appearing in the foreground. Note that the subject has moved closer to the wall behind, and the lights have moved in to illuminate the wall as well as the subject. This move is invisible to the audience, because the back wall was not in the establishing shot. In the drawing, the mike points at the subject, but again, an omnidirectional mike could adequately record the reporter too.

Figure 3 shows how easy it is to get a pure closeup of the subject, simply by zooming in somewhat (and narrowing the field of view). The reporter’s cheek and shoulders are now outside the image frame.

Let’s see how you can use these four setups to create the interview footage.

The neutral angle establishing shot is used to begin, and maybe to end the interview. If the sound quality is good enough, you can start the interview in the establishing shot. Often, however, this wide two-shot acts as a silent background for a title or voiceover introduction to the interview. In the same way, you can use this shot to wrap up the sequence. Typically, subject and reporter simply exchange unheard small talk behind the credits.

It’s often a good idea to delay the actual questions and answers until after the two-shot, because shifting the camera, lights and mike for the main interview setup (Figures 2 and 3) can take long enough to distract the participants and lose the flow of the discussion.

Typically, the interview will start with an over-the-shoulder closeup of the subject. In framing the shot, try to include the side of the reporter’s face. A moving cheek will indicate that the reporter is speaking, without revealing what’s being said. (The editor can then lay "moving cheek" footage over anything the reporter says.)

After you have enough footage over the reporter’s shoulder, zoom in to the subject’s closeup . That way, the closer angle on the subject can enhance the growing drama of the interview. (If you time it right, you can zoom and re-frame during a question so that the editor can replace the zoom with a shot of the reporter.)

Wait a minute. What shot of the reporter would that be? Ah. Now comes the trick. You set up and shoot the reporter after the main interview is over; in fact, you can allow the subject to leave at this point.

If you’ve been miking only the subject, the reporter will need to repeat every question. The easiest way to do this is with a playback deck: find each question on the A roll, play it back for the reporter, and then tape the reporter repeating it on the B roll. If you don’t have the equipment to do this, roll through the original footage in the camcorder, making notes on each question, and then have the reporter work from these notes. In some cases, you won’t need a follow-up question. Instead, the editor can insert a brief shot of the reporter listening while the subject adds to the previous response.

And now the reporter gets to really act. To provide cutaway footage for the editor, you need to record a repertory of reporter reactions for insertion at suitable moments. In addition to simply listening and nodding encouragement, a few other reactions are often useful:

Of course, the subject’s statements may suggest other reactions.

You can, of course, personalize this interview formula (some directors omit the neutral angle establishing shot), but our outline should get you launched in the right direction to shoot an interview that will rival anything on network TV.

Sidebar: Tips for Camcorder Setups
Here are some suggestions for getting the best possible picture and sound quality: