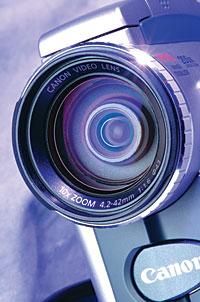 Ever had the feeling that you are at the mercy of your camcorder? Things you had hoped would be in focus weren’t. Your subject seemed lost against the background. Let’s take a step toward understanding and taking control of that device. One of the most critical components of your camcorder is its lens. The quality and interest of your videos are greatly dependent on your understanding and use of that lens.

How the Lens Works

If we trace rays reflecting from an object through a lens, we will find that they will form an inverted image of the object on the other side of the lens (Figure 2). If you get in a darkened room, point a magnifying glass at a brightly lit window and hold a white piece of paper behind it, you can see an inverted image of the window. You will have to fiddle around and move the paper closer or farther from the lens to find the image and this brings us to the first point we must understand.

There is an inverse relationship between the distance to the object in front of the lens and the distance of the image behind the lens. The closer the object in front of the lens, the farther the image will be behind the lens. Conversely, the farther the object from the lens, the closer the image will be to the lens. This is why your camcorder lens must be focused. The focusing mechanism moves the lens closer or farther from the chip, in order to make the image of objects at various distances fall on the chip.

It takes a specific quantity of light to allow your chip to form an image. It’s like filling a bucket with water. You can open the faucet just a trickle for a long time or open it wide for a short time to fill the same size bucket. Imagine yourself in a windowless room having only a small hole in one wall. If you are trying to read a newspaper, you will have difficulty. Moving the paper closer to the hole will help. Also, increasing the size of the hole will help. This is where those mysterious f-numbers come in.

On the other hand, the shutter speed also effects the exposure. Longer shutter speeds allow more time for the pixels of the chip to build up a charge in response to a dim image. A short shutter speed will give you sharper images of moving objects, assuming you have a bright enough image.

Now for the one that causes all the confusion. First, let’s define it. Remember we said that the lens must be focused on objects at a specific distance. Objects closer or farther will be progressively fuzzier. Depth of field is the total distance, in front of and in back of the object plane, over which objects are acceptably sharp. For example, if your camcorder is focused on an object 10 feet away, objects between eight and 15 feet may be acceptably sharp. This seven-foot zone is your depth of field (Figure 3).

With rule three, we move from confusion to outright hostility. It is usually stated, "depth of field increases as the focal length gets shorter." Since the image size is inversely proportional to the focal length, it seems that the two statements are equivalent and in reality they are. The form I have chosen emphasizes the fact that if the image size is the same, the depth of field will be the same no mater what the focal length. This is something that a great many photographers will vehemently dispute but let’s look at some examples.

To be sure, if you stand at a fixed position and point your camcorder at an object, you will get more depth of field with the lens zoomed back to wide angle than zoomed in to a long focal length. However, if you zoom in to a closeup and record some footage, then zoom back to a short focal length but move the camcorder closer so that the image size is the same, then the depth of field will be the same (Figure 4). The relative position of objects in the image to each other will change and this is often confused as a change in the depth of field. This is exactly what is happening in the famous Hitchcock "Vertigo" effect: the subject image size is maintained by zooming while the camera is moved. Still skeptical? See the Sidebar.

Let’s look at some practical uses for all this. For close ups, you need a small aperture because you will need more depth of field with the large image size. If there isn’t a lot of motion, a low shutter speed will help. Arrange for all the light you can get; close, fast and dim make a bad situation.

If you have a subject you need to isolate from a distracting background, using a large aperture, moving closer or zooming in to make the image larger will all serve to throw the background out of focus. You can force a larger aperture (iris) by using a faster shutter speed or a neutral density filter to limit the amount of light entering the camcorder.

In a scene where both near and far objects are important, you will need all the depth of field you can get. A small image size, a wide-angle shot if you prefer, will help. Also, more of the depth of field is behind the plane of focus than in front of it. Focus at an intermediate distance but be sure not to throw the close objects out of focus. The eye can tolerate softness in the background more than the foreground.

In any case, the better you understand optics, the more control you will have over the video that you shoot.