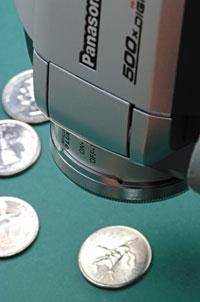 Zoom lenses are great, but sometimes they just can’t get you as close as you’d like to go. The solution? A macro shot. Macro video is a great way to add production value to a whole range of videos, including how-to and training tapes, documentaries, stamp or coin collections and more. A purist might define a macro photograph as a photo in which the object appears larger than actual size, but not taken through a microscope. The same techniques, uses and problems apply to any extreme closeup of a small object, and in this article, we will share some handy tips and tricks for shooting closeup shots in which your lens can’t focus without engaging its macro feature.

In many camcorders, the lens barrel is not visible, so you can’t see what’s happening during focusing. If you have a manual still camera lying around, watch what happens when you focus from infinity to close distances. The lens moves away from the film plane as you focus closer. The basic problem in extreme closeups is that you simply run out of lens barrel. Manufacturers try to provide the features users will want the most and usually only equip their camcorders with lenses that will do what people most commonly ask of them. However, uncommon shots often distance the exceptional productions from the ordinary ones.

Many video cameras have a macro setting, which shifts elements within the lens to enable it to focus closer, sometimes right up to the surface of the front element. Usually, the macro capability engages automatically. Individual cameras vary, so your owner’s manual will have to take you from here.

If your camcorder doesn’t have a macro setting, don’t despair. Supplementary lenses can enable you to cover most of the situations we will be talking about in this article.

Let’s begin setting up a macro shot. A good tripod is a must. At very close distances, any camera jiggle will be disastrous. A tripod with a smoothly operating center post enables fine adjustments in height. Also, you need a good platform for the objects you shoot. It’s helpful to find a stable pedestal that enables you to move the subject closer or farther from the lens, rather than moving the tripod.

The most intractable problem is probably depth of field. At these close distances, items may only be in focus within a small fraction of an inch. The most obvious solution is to increase depth of field by adding lots of light and using a small aperture (high f-stop number). Also, if you have a choice, choose a camera angle that brings most of the important features of the subject into the plane of focus.

Distortion is another side effect of close distances. Figure 1a illustrates a shot taken from about three feet away with a zoom lens set at a long focal length. Figure 1b shows a macro shot from a distance of about four inches. Notice the change in the apparent shape of the top of the block. This is simply a fact of life; the more you close in, the more distorted the perspective becomes. In many cases, it does little harm. Other times, you can use the effect creatively, while in still other cases you will have to live with an undesired distortion or use another approach. In this case, the image in Figure 1b makes the block appear more three-dimensional.

Macro shots are usually static, but if you have access to an old phonograph turntable, you can add some creative movement. (You do remember phonograph records don’t you?) If you center a figure on the turntable, you can smoothly rotate it to a new position or allow it to slowly coast to show all sides.

When lighting macro shots, all the usual techniques apply you’ll need to think about whether you’ll use soft, diffused light or hard directional light, and consider lighting ratio and background illumination. However, a few extra problems come with the macro photography territory. One vexing problem is the fact that the camcorder may actually get so close that it gets in the way of the light, casting a shadow on the subject. If directional light is acceptable, some fiddling around can usually eliminate much of the problem. If flat lighting is more desirable, the translucent cone technique is an option (see The Old Paper Cone Trick sidebar).

Backgrounds are as important in macros as in any other shot. With the restricted depth of field at these close distances, separating the background by selective focus is usually not a problem. Color harmony and tonal value need attention, however. A seamless piece of paper or a plain blanket will usually work. Be conscious of tonal mergers, such as white objects getting lost in a white background.

Macro shots have a variety of uses. They add variety, information and interest. Productions about hobbies or collections cry out for macro shots showing the details of coins, stamps or figurines. Imagine interviewing a coin collector. Visualize the collector talking about a coin, turning it over in his hand then laying it on the table in front of him. This would set up a macro shot of the coin. Footage of old photographs is another opportunity for the use of macro techniques. Historical productions benefit from closeups of old photographs or documents. They not only convey information but also relieve the visual monotony of a talking head. Family genealogies could rely heavily on video of photographs.

Weddings, birthdays and other celebrations also present great opportunities to use macros. Consider a macro of the rings, the wedding invitation or the figures on top or the wedding cake for cutaways. How about capturing a macro shot of the guest book, the marriage license or the rising bubbles in a festive glass of champagne?

Your dramatic presentations can benefit from macro shots as well. Picture an extremely tight shot of a key entering a lock or a shot of the pen writing putting ink to paper as a character signs his name on the dotted line of a contract.

Macro shots are easy to create and can add a great deal of interest to your productions. Start thinking about ways to enhance the videos you make, and you will find more uses for macro shots if you look for them.

Depth of field is the range of distance in front of and in back of the plane of focus over which objects are acceptably sharp. Here are four simple rules to help you keep objects in and out of focus as you like:

1. Depth of field increases as the aperture gets smaller (larger f-stop numbers).

2. Depth of field decreases as the lens-to-subject distance decreases.

3. Depth of field increases as the image size gets smaller, (or as the focal length gets shorter).

Always keep a lens brush handy because your macro setting may inadvertently bring dust on the lens into focus.

Shiny surfaces are tough to photograph. If lighted with harsh lights, reflections obscure the surface, as in the top photograph of a coin. Shiny objects reflect images from their surroundings, which are usually dark, or worse yet, they reflect the specular image of the light source.

If you surround the object with a translucent paper cone, then illuminate the cone from the outside, the object will reflect the cone and appear as you had expected it to appear. An ordinary sheet of paper will usually suffice. Simply trim and tape the paper in the form of a cone around the object and point the camcorder’s lens into the cone as shown in the photograph. Then illuminate the cone evenly from all sides. The bottom photograph of the coin illustrates the result.

Unevenly illuminating the cone will create slightly more directional lighting. You might even tape an opaque strip on one side of the cone to enhance the directional effect.

Reflected or diffused light can soften shadows and harsh reflections, although there is nothing wrong with either lighting technique pictured here.